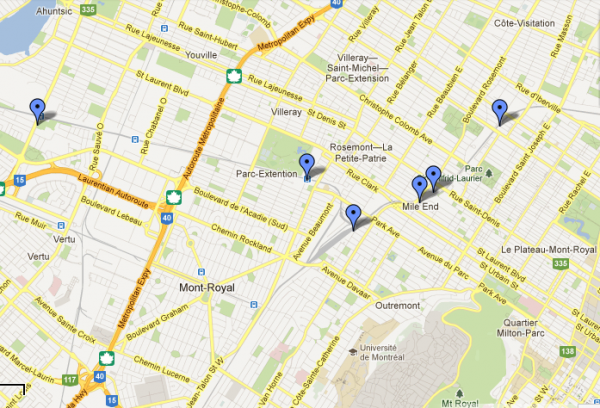 In 2011, following a citizen mobilization and petition to open the tracks between the Petite-Patrie and Mile End neighbourhoods, Montreal city council unanimously adopted a motion in favour of implementing level crossings. But negotiations with the CP ground to a halt later that year. CP insists on sticking to overpasses and underpasses, but a great number of pedestrians and cyclists just as stubbornly refuse to take a detour that requires either climbing several flights of steps, or plunging into a dim, smelly tunnel.

In response, CP security officers have adopted the infuriating practice of laying wait at popular rail crossing spots, pouncing on pedestrians as they slip through the gaping holes in the chain link fence, and slapping them with $146 trespassing fines (those so inclined can read about my personal fury here).

But at least our counselors are sticking up for us:

“Canadian Pacific’s obstinacy in maintaining their urban barrier which bisects neighbourhoods is unacceptable, and furthermore the game of cat and mouse with our citizens must stop!” said RDP councillor Cindy Leclerc, who sits on the city’s transportation committee.

“We will no longer tolerate the ignorance and disregard of a company that governs as if it had never been to Montreal,” said Plateau borough mayor, Luc Ferrandez in a Projet Montréal press release.

The six proposed crossings would be located at:

Altogether, it is estimated that the six crossings would cost $1.5 Million. The CTA will also be asked to weigh in on whether the CP should be required to split the cost with the city.

UPDATE: The CP has responded with a press release once again insisting on “grade-separated solutions” due to safety concerns. Last year CP reports that last year in Canada there were 154 injuries and fatalities due to “trespassing and crossing” (they do not apparently differentiate between the legally and illegal crossing).

There are about 55,000 level-grade crossings in Canada.