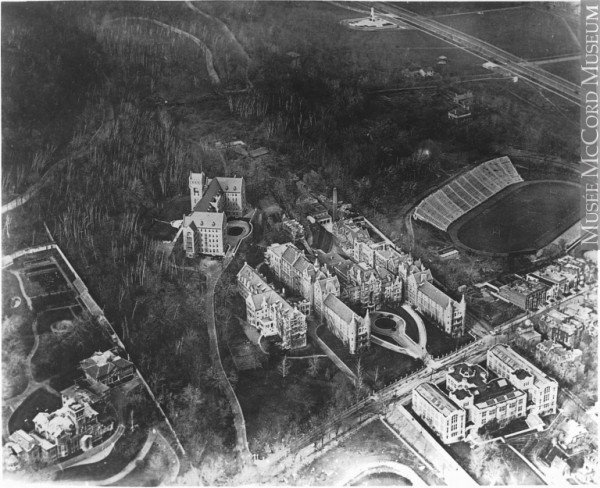 I’ve been wondering about how much influence dead people have in urban planning.

I’m not talking about the instances in which we choose to pay homage to historical figures, whether by creating new monuments or by preserving the places that were meaningful during their lifetimes. Nor am I talking about the decisions made by our forefathers & fore-mothers that have left long-lasting traces in the landscape. I’m referring to those public spaces whose vocation has been pre-determined – in perpetuity – by Montrealers who have long since passed.

The Royal Victoria Hospital is the most recent example to hit the headlines: the 1893 building is to be vacated in 2015 with the completion of the MUHC hospital. But, a Gazette columnist wonders, will future plans for the site have to respect the fact that the land to build the hospital was donated in 1890 by Lord Mount Stephen and Sir Donald Smith, for the express purpose of building a hospital, along with a million dollars for construction and another million for an endowment fund?

So that got me wondering how many of our public spaces are still legally bound to the vision of their long-gone proprietors? Turns out quite a few, although the deeds are not always respected to the letter… Here are a few examples:

Place Jacques Cartier was ceded to the City of Montreal in 1803 on the condition that it serve as a public market. The land owners, Joseph Périnault and Jean-Baptiste-Amable Durocher, had purchased the land at a discount after a great fire had destroyed most of the neighbourhood earlier that year, then went about re-parceling of land surrounding the brand new marketplace and selling it at at huge profit. But less than 50 years later, the City opened the Marché Bonsecours and eventually the open-air market in place Jacques Cartier disappeared… all but one remaining flower stand, that is.

Place Pasteur: the little park located on St-Denis just above Ste-Catherine was bequeathed to the City in 1823 by Louis-Joseph Papineau, to serve as a public space in perpetuity. Since 1991, this public space has been surrounded on three sides by UQAM’s Athanase-David pavilion and to the untrained eye would appear to be part of the campus. In 1999, the City gave UQAM a ten-year contract for designing and maintaining the site (I haven’t been able to find any information on the site’s status since 2009). This semi-privatization of the public site has been criticized, especially in 2009 when the university refused to permit the Festival d’expression de la rue, an event focusing on street youth culture, to use the site.

Place Viger: straddling the Ville-Marie Expressway, with its concrete, labyrinthian installations, the public space that Montrealers love to hate is another legacy of Louis-Joseph Papineau. In 1818, Papineau and his aunt donated a parcel of land 310 x 80 feet in diameter, on either side of rue Saint-Denis, to be used as a public market in perpetuity. (Although I found no mention of it, I wonder if this is why this is one of the only parts of the Ville Marie expressway that was recovered?) More recently, this deed caused controversy when the CHUM hospital released plans to build a research centre on the western side of the public square. Eventually an agreement was reached to preserve Place Chénier, a thin band of public space on the western side of St-Denis, although this concession apparently came at a cost of $17 million and 17 months delay to the CHUM.

Coolopolis blog lists more Montreal sites where ancient deeds have tangled up present planning, including the Dow Planetarium, which apparently must remain a planetarium forever, Oxford Park in NDG, and part of Décarie Boulevard, where the family gave up land for road construction on the condition that it would include a street car in perpetuity. When the City demolished the marketplace on Rachel and St-Laurent, they had to pay the descendants of the land donor $92,000 in compensation.

In response to the CHUM controversy in 2008, Le Devoir asked whether “forever” has a place in the urban landscape?

It’s a good question. My gut reaction is to defend each of these ancient deeds, but why? I’m usually more of a proponent of public consultation, participatory democracy, and grassroots place-making in urban planning, rather than unilateral decree by rich dead guy.

Of course I’m a fan of public squares, markets and healthcare… but when it comes down to it, I’m an even greater fan of resilient, flexible urban spaces.