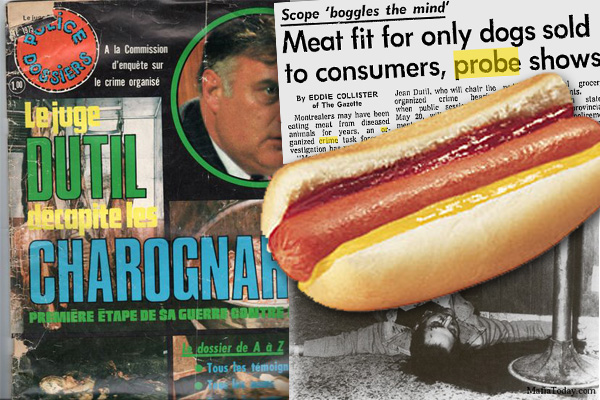 Part 4 in our history of corruption in Montreal. Check Spacing Montreal each day this week for the latest “episode” in this century-long soap opera.

The Commission of Inquiry into Organized Crime (CECO) marked a novel approach in the long-standing local tradition of corruption inquiries: for the first time a commission was directed at the actual criminal organizations that dealt in drugs, fraud, extortion, counterfeit, and of course the classic prostitution and gambling.

The inquiry was launched in 1972 with a speech by none other than Pacifique Plante, the ex-police chief who emerged from hiding in Mexico for the occasion (he had apparently fled there in 1958 to escape death threats). The man who had been chief prosecutor alongside Jean Drapeau during the 1950 Caron Inquiry asserted that, despite two decades of Drapeau’s reign, the city remained firmly in the grip of criminals.

Fueled with evidence from wiretaps and hearsay allegations, CECO aggressively dragged suspected mafia bosses before the courts, and jailed them for contempt if they refused to confess. Certain national banks were also implicated for running well-known “mafia branches.” One of the most infamous revelations was that thousands of kilos of putrid meat had been sold to grocery stores and restaurants by mob-affiliated slaughterhouses. Apparently 30 brands of sausage sold at the Expo-67 world fair contained meat that was unfit for human consumption.

While the CECO continued to shed unwelcome light on mob activities, the late 1970s were marked by a slew of assassinations within the underworld. Of course the mobsters that were taken out – be it by the law or by their own – only made room for new criminals to step up to the plate. Vic Cotroni’s rule gave way to Nicolo Rizzuto’s. 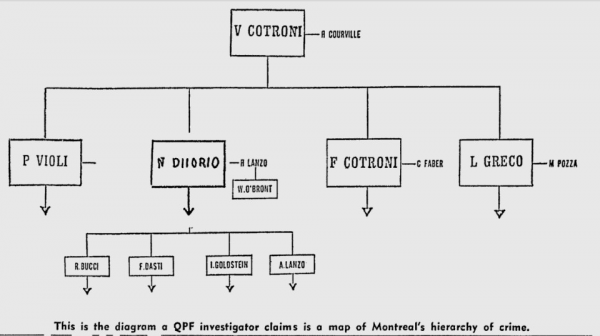 Sources: Globe and mail; Les révélations de la CECO par Richard Arès (PDF). Also, I should mention that this post is treading in deep in Coolopolis territory: for so, so much more detail on Montreal gangland murders, read on here.