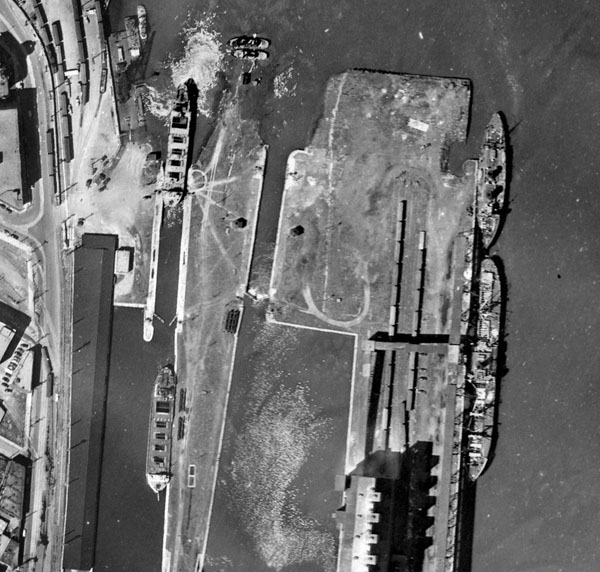 In the 1947 aerial imagery one can see a lot of the industrial heritage of Montreal. Two pieces of industrial infrastructure, which today have become industrial monuments, can be seen in the image below. 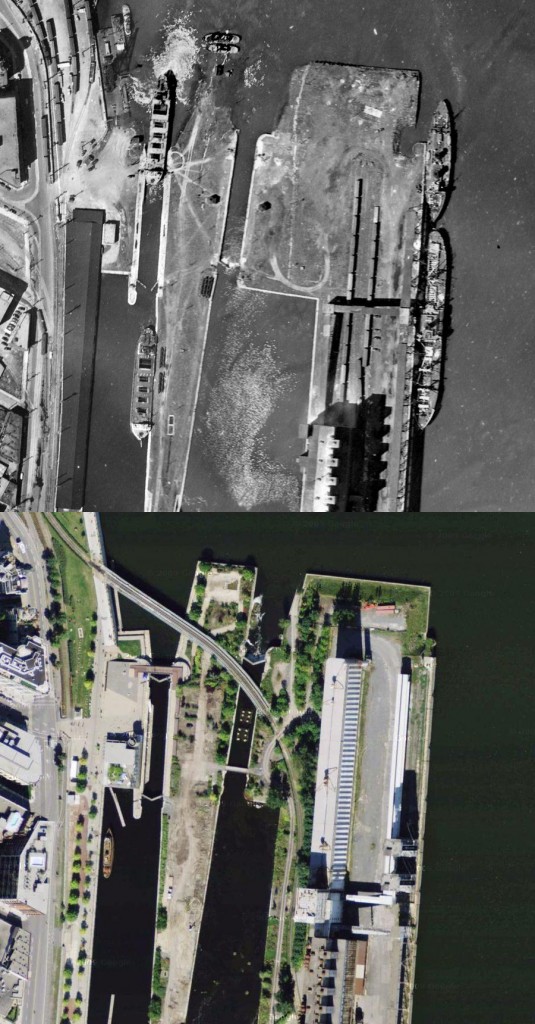 First, we see the locks that form the entry to the Lachine Canal. It was built starting in 1821 to bypass the Lachine Rapids, which opened the upper St-Lawrence River to navigation, and helped Montreal become a center of trade in the region. The canal, which originally ran through a rural area, soon drew shipbuilders, warehouses and other industries, who were attracted by the trade possibilities and the waterpower provided by the five (originally seven) locks. Workers settled near the factories, which created the working class neighbourhoods of Griffintown, St Henri and Pointe St Charles. This boom in Montreal drew economic activity westwards at the expense of the Maritimes.

The second monument is silo #5 grain elevator, a massive machine for the transfer of grain from trains to ships. The complex was built in several stages starting in 1906. It’s largest addition came in 1959 – so it is not yet visible in the 1947 aerial image.

A decade after the historical photo was taken, both these icons began to decline into obsolescence.

The Lachine canal was expanded several times to try and accomodate larger ships, but eventually couldn’t be expanded anymore because of the adjacent industries. Finally, in 1959, the St Lawrence Seaway was built to replace the Lachine Canal, with the objective of attracting trade, just as the canal once had. The expansion of silo #5 is a testament to that optimism. But just as the Lachine canal helped move economic activity west from the Maritimes, the St Lawrence Seaway moved it west from Montreal. It provided a way for sea-going ships to move further inland, and do the grain transshipment in the great lakes. Today, Thunder Bay is the largest grain port in North America.