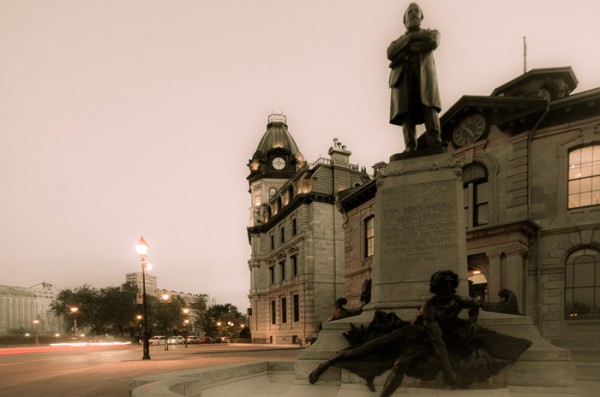 The John Young Monument that was sculpted in 1895 by Louis-Philippe Hébert. Young (1811-1878) was born in Scotland and moved to Canada when he was 15.

Young became a successful businessman as the co-partner of an import/export and steamboat company and was a key driving force behind developing Montreal’s sea and rail transportation, including;

He became chairman of the Montreal Port Commission in 1853 and was a member of the Legislative Assembly of the Province of Canada and a member of Parliament of the House of Commons of Canada.

The monument was erected in 1908 and originally located in front of the port of Montreal. It was moved to the current location on rue Saint Pierre in 1997. The figure of Neptune at the base of the monument represents the Saint Lawrence River.