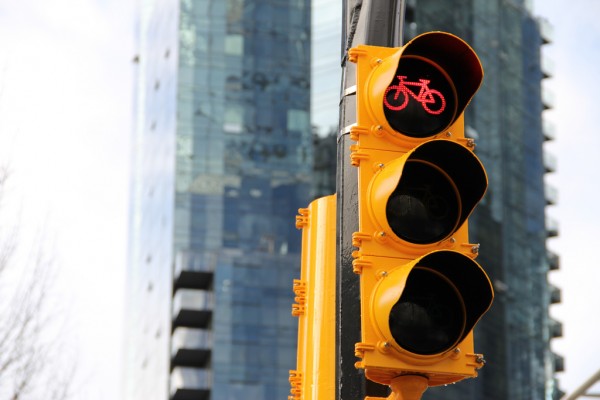 Both Toronto and Montreal have made progress towards creating a connected network of bike lanes, yet each has taken a different approach. In the 1980s, Montreal became one of the earliest cities in Canada to install segregated on-street cycling infrastructure, whereas Toronto started to install the majority of its on-street painted bike lanes in early 1990s, only to receive its first segregated lane on Sherbourne in late 2012.

The purpose of this video — produced by  Toronto Centre for Active Transportation (TCAT) — is to explore reasons for the segregated versus painted approach and provide a discussion about what each city could do to make their cycling network more connected, more convenient, and safer for all cyclists.

This conversation is timely. Outside of Toronto and Montreal, Canadian cities are entering into a new era of planning where urban cycling is becoming more mainstream. Planners, engineers, public health officials, and other stakeholders in cities of different shapes, sizes, and geographic contexts are beginning to collectively value cycling as a legitimate, practical, and necessary component of a healthy transportation system that contributes to a clean environment and vibrant economy.

We see the growth in the uptake of cycling infrastructure in communities of all shapes and sizes from across the country. From Vancouver’s growing network of segregated bike lanes, to Thunder Bay’s recent addition of painted on-street bike lanes, to the general growth of the Complete Streets for Canada movement in cities as diverse as Edmonton, Waterloo, Ajax, Calgary and Halifax.

While we have a long way to go before we become an urban cycling friendly nation, the wheels are well in motion.

The video is also available on YouTube in French and Spanish.