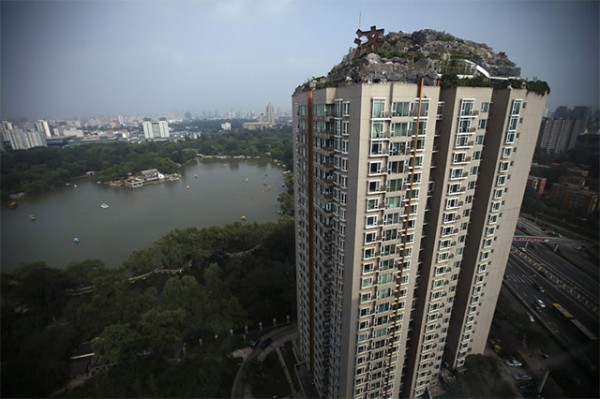 In Canada, renovations cause a headache for most home-owners. Oftentimes, you need a permit to reclad your house, to replace your windows, or to reshingle your roof. If you’re lucky, you can erect a modest fence or plant a couple trees without having to research municipal regulations.

Needless to say, the same protocol doesn’t appear to be as strict in China.

For the past six years, an eccentric (and wealthy) local doctor has been building a small mountain of artificial rocks (with real greenery) on the roof of his top-floor penthouse apartment in Beijing. The enormous addition (and little mountain) covers the entire 1000 square-metre roof of the high-rise.

Unfortunately for his neighbours, he didn’t ask permission before he started work on his experimental mountain-on-a-building. They have been complaining about noise and vibrations due to heavy machinery, water leaks and other disturbances for over six years. One 77-year old resident claims to have been beaten up after making a complaint about the renovation.

Unfortunately for the doctor, he also didn’t request permission from local authorities, who recently gave the man a notice of 15 days to remove the mountain or else it will face forced removal.

This story takes the NIMBY-sentiment to all new heights.