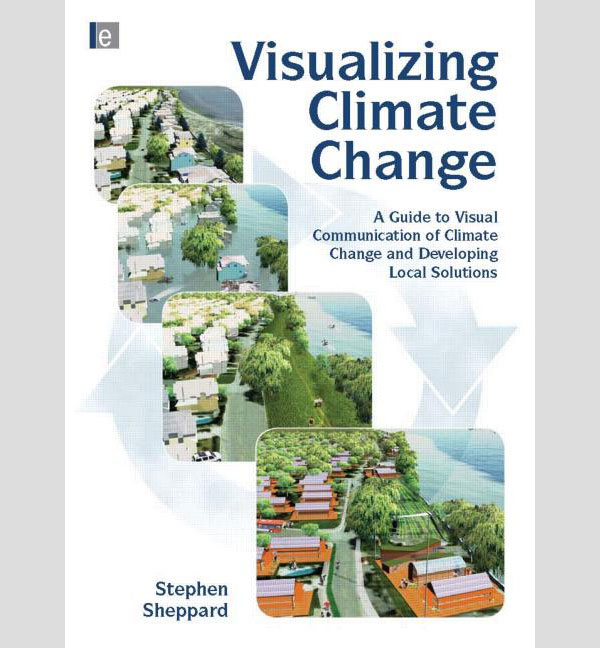 Just recently I began talking more frequently to friends and peers about climate change after reading a variety of books on the subject, and was absolutely blown away with the number of (intelligent!) people who believe that it is all a hoax, a government ploy, or ‘just nature’s way’. As I dug into what I thought was going to be an intensive textbook-esque read of more climate change facts and figures, I was pleasantly surprised to see that Visualizing Climate Change had received the memo that people will neither change or believe things on facts and figures alone anymore, nor be affected seeing diagrams of far off problems. Unfortunately, seeing pictures of polar bears drifting away on melted ice caps and knowing in our hearts that this is a terrible situation, does not impede our decision to drive to work or our ability to get our groceries from across the globe. As Sheppard clearly shows us, however, all of these elements are actually in jeopardy everyday, we just don’t see them as prevalently.

The book is split into four Parts—Setting the scene on climate change, Knowing, seeing and acting on community carbon and climate change, Switching lenses: changing minds with visual learning tools, and With new eyes to see: What the future looks like with climate change—each of which is divided into chapters. The strongest part about this organization is that it begins in a place that we have all seen before, with charts like the “hockey stick,” showing how rapidly our world has warmed since the industrial revolution. But here, the book makes a quick jump into more accessible waters (almost literally), by talking about real life scenarios, through images—giving readers a little taste of the imagery that is to come, but geting the reader used to the visual-based style of the book.

The minute I showed my wife images of Delta, B.C. flooded by 2050, and described the increased salination of the crops and farm fields in the surrounding areas (where she works with horses) she immediately perked up and began to listen closer (not that she ever ignored the aspects of climate change). It became uncannily more apparent that if you showed someone an image of their hometown in some state of climate distress, they were more likely to elicit some type of reaction. Sheppard importantly, however, cautions many times against what he called the “doom and gloom” outlook, saying that if one polarizes individuals too much—via news reports that are created to shock and awe, or movies like “The Day after Tomorrow”—one finds that, while they walk away terrified and are perhaps motivated initially to change, their long-term grasp of concepts fall away. Simply put, if the effects of climate change are dramatized as extreme events, people associate it with a fictional world and lose sight of the real ramifications of the changes occurring right now in our immediate vicinity.

One impactful moment in the book occurs in a chapter called Seeing adaptation solutions, specifically in the Second Part, within which Sheppard states that “we have found that many historical precedents for dealing with climate variation and social changes are visible in communities, and early examples of adaptation measures are starting to be put in place.” He continues, stating that making these adaptation’s functions more visible and compelling is “crucial in integrating climate change adaptation into community decision making.” BC Hydro has begun to do this, by utilizing their “Team PowerSmart” campaign to reward and encourage users to reduce their energy usage for rewards on their next bill or through draws for prizes, a perfect incentive to make people see the actual impact they are having on their environment.

This is the type of down-to-earth approach Sheppard supports throughout his book: arriving at a place where individuals can actually see for themselves the effects of climate change happening in their backyard. One cannot emphasize enough the magnificent and refreshing part about Visualizing Climate Change is that Sheppard, unlike other climate change advocates, doesn’t focus on the destruction.  Instead, he speaks to our inevitable adaptation, and what this could mean for the world at large. He very simply states at the end of the book that “before you can fix a problem, you must understand it, be able to think through its implications, and imagine the solution.” Although he stands firm in his position of the dangers surrounding our ecosystem, he recognizes that “many of the things that look so normal and so desirable to us in modern society are the very things that cause climate change and are adversely impacting upon present and future generations as we speak.”

It will be a long and dirty road, but as a species we can do much to make our experience as good or as terrible as we so choose. I do not begrudge those friends and peers of mine who disbelieve in climate issues, but instead, understand that they have simply not been privy to the visual information that Sheppard and Visualizing Climate Change present so eloquently.