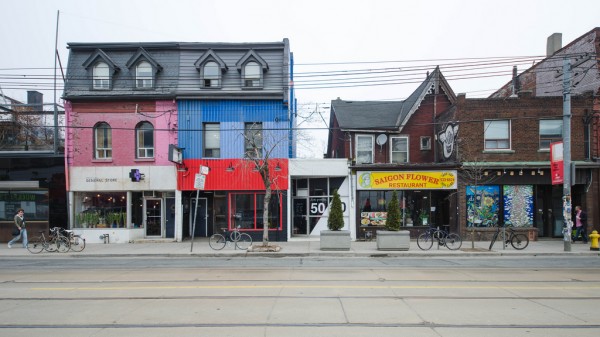 Kevin Steele is a Toronto based graphic designer and photographer, widely known for his work photographing, and combining images of Queen West storefronts. Steele has been sharing his work online since 2001, and is a longtime contributor to Spacing.

How long have you been working with Spacing?

Since the first issue, and I’ve had sporadic involvement since then. I’ve been more audience than contributor in recent years.

How did you initially become involved with Spacing?

I was contacted by (Editor in Chief) Matthew Blackett, and he showed me his layouts for this magazine he wanted to make. He had been using a number of my pictures that I had been posting online, just as dummies for his layouts. I work primarily as a graphic designer, and generally take the kind of pictures that I would use editorially, so I felt some kinship with what he was doing.

How/when did your interest in urban landscapes and cities develop?

I think it developed as I was taking pictures of the city. To a certain extent it seemed parallel with the rise of the kind of discussions going on in places like Spacing magazine. I would walk around taking pictures of the city because that’s where I was. Sharing pictures on the Internet, and looking at pictures others share of their city, all of that was part of my becoming more interested in how we live. Ultimately, I started participating in that kind of conversation by contributing my pictures. 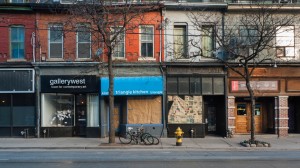 What is it about Queen West that inspires you to capture images in this particular area of the city?

I used to go everywhere in the city, but would take more pictures of Queen Street West. Eventually I started sharing my pictures of Toronto, and more and more people were sharing theirs. Over the course of a few years the city became really well covered. I was looking for new things to do, and took the opportunity to constrain my pictures, and to concentrate on Queen West.

How long have you been photographing Queen West?

Really just since the turn of the century. I wasn’t taking many pictures in the 90s but I’ll occasionally find an older picture or snapshot that fits into the pictures I’m taking now, but it really wasn’t until digital photography.

Do you have a favourite section of the street?

West of Spadina. I didn’t start taking these pictures for documentary reasons. It only happened as my pictures started adding up, and I began to see change in the pictures themselves that I started to care more about the documentary aspect. That stretch between university and Spadina is really important because that’s what’s coming to the rest of Queen Street slowly. 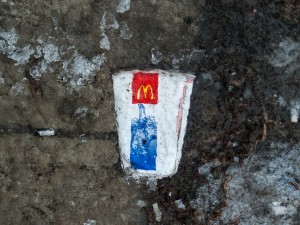 What is your favourite thing to photograph? (Queen West, litter, cats?)

The way I shoot photographs now is kind of a habit. The storefront thing, I have to do that for a certain amount of time, I just have to, and I like that. As for the litter, I started to feel the weight of my back archive, and the litter slowed down because I wasn’t sure what I was going to do with all of those pictures. To a certain extent anything I have to say about litter can be said in a single picture. Every once and I while though, I see one, and I just can’t help it. 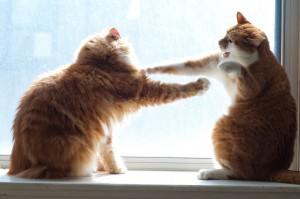 And what about your cats?

The cats are a completely different thing. You can’t control animals, and so it’s an interesting challenge. I learn a lot more trying to take pictures of the cats. We live in a time where there is interest in cat photos and I like to be one of the people adding cat content to the Internet. I was never really interested in photography until I tried to photograph my cats, and only from that did I become interested in learning more.

Do you prefer graphic design or photography?

It’s like apples and oranges. You can finish a picture pretty quickly; sometimes it’s finished the second you take it. Graphic design is always a project that involves other people. The rewards are very different.

What have you learned from your experiences with photography?

The most obvious thing is that change is constant.