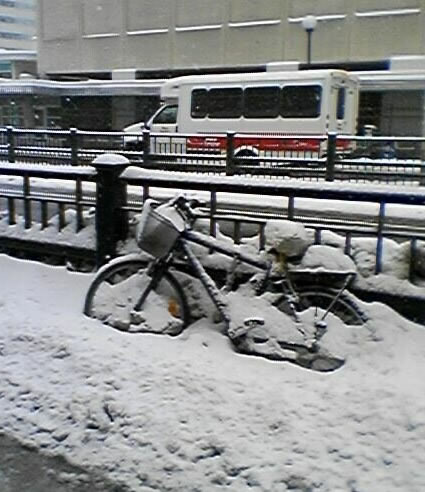 On my way from the bus to the Rideau Centre doors one morning last month, just after the first real snowfall of the year, I passed a bike that had been left locked to the railing. It was up to the pedals in snow, half buried, and had clearly been there since before the snow came down. To me at least, it looked as though the basket still had some things in it – but then maybe it was just that passing pedestrians had been sticking coffee cups and flyers and other trash in the basket.

I had no way of knowing how long that bike had been there, but I kept an eye out for it, and when I passed a few days later, there it still was. And I started wondering. Whose bike was it? Why had it been left on the bridge? Why hadn’t its owner returned for it? How long had it been there, and how long was it going to stay there before someone removed it… and for that matter, whose responsibility was it to move the thing? What would happen to it?

So I decided to try and find out. I called the City of Ottawa and was directed to their Media Relations office, who told me that the police hold an auction a couple of times a year, where they auction off any bikes they’re holding that aren’t claimed. All well and good, I thought, but how long does a bike have to sit in a public place before someone comes by to cut the locks? And who does that? Where does the money from the auction go and who comes to the auction? How do you know where to go if your bike’s been left out and taken away?

I called the Ottawa Police and talked to someone who told me more. Apparently the majority of the bikes processed by the police are found; generally stolen and then recovered when they’re abandoned and someone reports finding them. When a bike is left locked in a public place, it’s up to the owner of the property to report it: they have to call the city to get someone to come out and cut the locks. Say the bike is left locked to the rail on the steps of a church: someone from the church has to call it in. If it’s left locked to a city bike rack, presumably someone from the city is charged with monitoring how long it stays there and when it comes down.

So that bike sitting on the Mackenzie King transit bridge would presumably have to be reported by someone working for OC Transpo, since they’re responsible for Transitway stations.

Anyway, the city collects them, then the bikes are picked up by the police and entered into the Canadian Police Information Centre. If the bike has a serial number, it will be entered into the database. And if you happen to know your bike’s serial number, you can search for it and find out if it’s been turned in anywhere. . . although I’m willing to bet most if not all of the cyclists I know don’t have a clue what their bike’s number might be. Maybe if I paid $1000 or so for my bike I’d know that, but generally bikes are like cats: few people go out and get purebreds. More often they’re adopted, secondhand, bought from friends, acquired, inherited from moves.

The police enter the bike into CPIC, and then hold onto it for a minimum of 30 days. If no one has claimed the bike in that time (and 80% of bikes go unclaimed) then the bikes are collected by an organization called Crown Assets Distribution (www.crownassets.pwgsc.gc.ca), which is “a federal government organization responsible for the sale, distribution, disposal and re-use of surplus federal goods.” Their website posts items for auction, and sells everything from clothing to cars on a blind bidding system. Up until 2004 the police had arranged their own auctions, but their arrangement with CAD means they don’t have to worry about finding and renting a venue, staffing an auction, and all the other hassles involved. And the money still goes back to police administration.

So the bikes don’t get donated to any non-profit organizations, but presumably they do find a new lease on life, and new owners, sooner or later. . . how much sooner or later depends on where they get left, and who decides to declare them abandoned, and whether they know to call it in. Something tells me most bikes sit on their own a good long while before someone gets irritated with them being there.

Kate Hunt is a writer and editor who works as Community Liaison for the Ottawa International Writers Festival. She has lived in Ottawa, off and on, since 1994. When not writing, doing web design and communications, freelance editing, or blogging, she helps to run the Dusty Owl Reading Series and Small Press and performs as one-fourth of the Kymeras, a storytelling and poetry troupe. She named her bicycle Mike, which seems to amuse people.