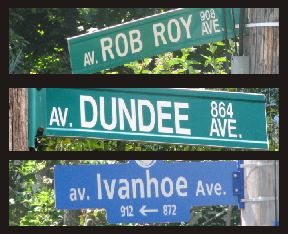 This story might have started with the publication of Sir Walter Scott‘s historical novels such as discussed here previously, back in the first half of the 19th Century.

Or we could date it from 1910 and the founding of the Britannia Highlands syndicate, the group responsible for developing the neighbourhood that is home to these streets.

At that time, Nepean Township still existed on the maps and in the statute books of Canada and Ontario alike, and Britannia was a farming village in Nepean Township. The village dated from 1819 and the construction of a single log cabin by Captain John LeBreton, but by 1910, Britannia was slowly growing into a kind of hybrid; part summer resort, part suburb of Ottawa.

The syndicate was officially chartered as “Britannia Highlands Limited” by a group led by Stewart McClenaghan, then a dry-goods retailer but in two years’ time destined to be a member of the Ottawa Board of Control, and a decade later, to be a commissioner of the Ontario Liquor Control Board. He had four partners, including the president of the Ottawa Electric Railroad,  J. E. Hutcheson. Without that connection to local passenger rail, or the publicity efforts of Ezra Butler Eddy, the grandson of the founder of E. B. Eddy , it’s doubtful that the scheme would have succeeded to the degree that it eventually did. The whole thing was real-estate speculation, plain and simple. The group bought some 200 acres on the heights overlooking the original settlement of Britannia, just south of the Carling-Richmond intersection, filed the paperwork of the day with the appropriate authorities, and started laying down roads and carving up lots to sell.

The names they chose were particular: clearly someone in the group had an affection for works of the aforementioned Mr. Scott. Thus we have avenues named Dundee, Ivanhoe and Rob Roy on the modern map of Ottawa, a full century after their naming, and long after the novels themselves have fallen out of fashion.

Britannia Highlands — since conflated with another development named Britannia Heights — became part of Ottawa in the annexations of 1950. 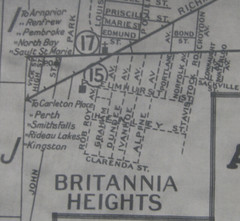