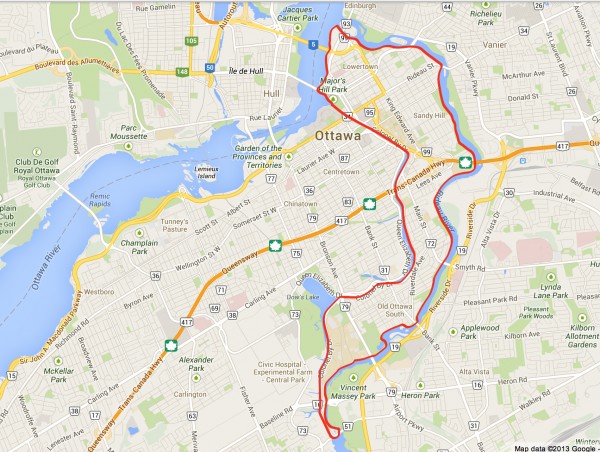 Toronto has Ward’s Island, Vancouver’s got Granville, and Montreal has, well, the Island of Montreal. So it is about time that Ottawa took a look at itself to see that it too is a great Canadian city with claims to a water-locked piece of land. And it’s quite large if you really think about – so large that a good majority of us actually live, work or go to school on it. And while we are all familiar with Chaudière and Victoria Island, this piece of geography has gone overlooked in our daily trips across the many bridges that mark the Ottawa cityscape. But overlooked it shall no longer be, as Ottawa finds a new sense of identity, united by a piece of land that contains so much of our great city.

But where is this island you ask? Bordered by both the Rideau Canal and Rideau River, which meet at the island’s southern-most point forming ‘Hog’s Back’, and the Ottawa River at its northern end, this island is home to many of the city’s most familiar neighbourhoods, including Old Ottawa South, Rideau Gardens, Old Ottawa East, Sandy Hill, the Byward Market, and Lowertown, as well as all three universities (Carleton University, Saint Paul University and the University of Ottawa). Both Bank Street and Bronson Avenue pass over it, with King Edward, Main and Riverdale being situated solely on the island. But what is most interesting is what happens between Wellington Street in the west and Montreal Road in the east end.

While a single line on a map, Wellington terminates on its eastern end and seamlessly transitions into Rideau Street, marked almost unnoticeably by the Plaza Bridge which joins the island to mainland Ottawa over the Rideau Canal. Rideau Street then continues across the island, running its entire width, and only transitioning into the western end of Montreal Road when it reaches the Cummings Bridge over the Rideau River. What this all adds up to is the fact that Rideau Street is situated solely on the island, a main road of sorts (if you don’t count Main Street, that is).

Thus, I propose we call it Rideau Island, for both the street that defines it and the two bodies of water that circle it. A fitting name sake for such a large and important piece of Ottawa real estate.

And while it is true that this island was technically artificially-made, the Rideau Canal having been constructed, that small detail should not take away from the fact that there are clearly established neighbourhoods, with specific identities, on it, and geographically defined by it. The question is, if we are to embrace the idea of an Ottawa island, Rideau Island, what new and larger identity could be formed. Would you be proud to say you live/work/study/relax on Rideau Island?