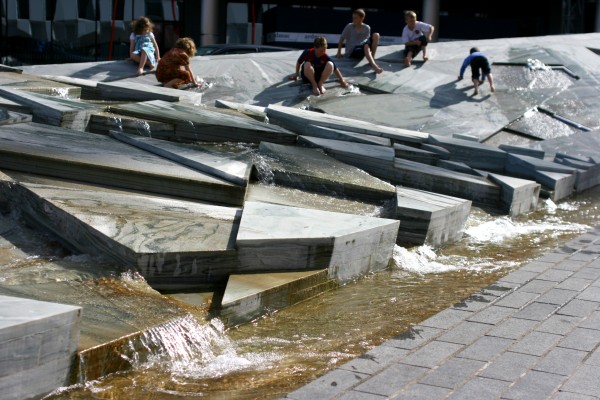 Beginning her presentation with a humourous account of how, despite the fact that almost all members of her immediate and extended families were architects, Schwartz grew up believing that she did not want, by any means, to be an architect, let alone a landscape architect. Fast-forward a few decades, and Schwartz now heads the internationally based landscape architecture firm Martha Schwartz Partners, self described as being “situated at the intersection of landscape, art and urbanism,” and has won multiple awards for her creative, critical, and often whimsical landscape designs.

While spending the first portion of her lecture explaining many of the principles of good landscape and urban design, such as walkability, sustainability, density, public transit, holistic planning, and thoughtful public spaces, Schwartz explained her interesting approach to landscape architecture as both an extension of her art, as well as a fundamental component to urban design.

Most interesting, however, was how urban Schwartz’s work is, despite the hang-ups that many have about the term landscape architecture and its relationship to nature, as opposed to urbanity. Schwartz explained, “I’ve always loved cities… always been about cities,” and defined her domain of work as “everything outside the building.” Stating the fact that we spend seven times more of our daily life on sidewalks and roads than we do in parks, Schwartz explained the need for us to take a meaningful look at all aspects of our outdoor built environment, both the picturesque and the not so beautiful components of it, in order to create healthy cities – as it is the task of making cities livable and attractive to both current and potential residents that is the greatest role of the landscape architect, according to Schwartz.

Schwartz furthered this idea through the personification of the “sophisticated mayor” who would realize that, in order to retain and attract both local residents, businesses, and the diversity of a immigrant population, one must pay greatest attention in their role as mayor to the built environment – in terms of both their city’s “hard” and “soft” systems. This is due to Schwartz’s belief that people will choose to live in cities, which are environmentally and culturally healthy, when given the choice.

This was followed by Schwartz’s explanation of the importance of design as more than just an esthetical value, but rather as an integral part of sustainability; for if something is well designed, the general public is more likely to give it meaning, connect to it emotionally, and thus ensure its maintenance and longevity. Schwartz stated that distinctiveness and uniqueness were what give cities, both new and regenerative, a competitive edge when vying for residents and businesses and stressed that in order for design to be successful, projects needed to make sense financially, as well as socially and environmentally. However, Schwartz balanced this by stating that design alone could not make a city successful, but was rather a crucial factor in a city reaching its full potential.

And Schwartz’s informed, yet humourous approach, continued throughout the evening, as she off-handedly stated that she did not learn how to be a landscape architect from her education at Harvard, “but that’s another story,” and again reinstated the fact that she had always wanted to be an artist. Schwartz, however, began to first consider the role of landscape architect when she started to study the emerging projects of earth work artists who were bringing together her two fields of study, often with either a critical or wonder-filled angle to their work.

This interdisciplinary approach to landscape design was highly evident in one of Schwartz first works, entitled “Bagel Garden”; a project in which she transformed her front yard into a quasi-French garden of pruned hedges, which where in turn circled for a path of edible bagels, (her reasons for this choice of material lie somewhere between democracy and rebellion), and caused a stir when it was featured on the cover of Landscape Architecture Magazine. And yet despite all the commentaries her work received, Schwartz, in short, chalked-it up to a boredom of what she saw as current landscape architecture. And with that, Schwartz asked, “why cant a landscape be funny, be dada, be bagels?”, once again overlaying her understanding of both the comical and critical nature that our landscapes can and should posses.

Following this half of the lecture, Schwartz detailed many of her past, recent and current projects happening around the globe, including Yorkville Park in Toronto, and Garden Plot 6 in China, perhaps her most intriguing project of the night. From this it was evident that Schwartz not only preaches good urbanism, but also rather includes her beliefs in every project that her practice is a part of. Whether meeting the challenges of revitalizing a waterfront, or attempting to turn a developer’s sales site into an urban oasis park space, Schwartz does not limit herself to one box of tools or typologies, but rather uses her insight, her light-hearted nature and her love for both art and cities to create public spaces which are both meaningful now, and will have the staying power to be meaningful to future generations.

In light of seeing Martha Schwartz’s projects presented in the Nation’s Capital, what are the public spaces that you believe could benefit from the work of someone such as Schwartz? What vision do you have for Ottawa’s landscape future?