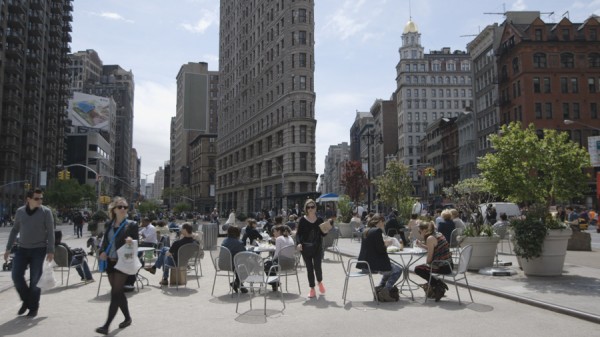 November 14th marked the second event in the 2013-2014 Urban Forum calendar, with a public screening of the documentary, The Human Scale. The Ottawa premiere of the film by Andreas Dalsgaard, which was presented in collaboration with the Royal Danish Embassy in Canada, saw a full house at the Mayfair Theatre, in Old Ottawa South, and was a moving warning as to how we are building our cities, and ways we can work to improve them, and their basic qualities of life.

Focusing on the work of Danish architect Jan Gehl, and his international practice Gehl Architects, the film is divided into five chapters, each with case studies used to either highlight growing urban concerns, such as the possibility of the ‘gigacity’ built for the car, or precedents of how good design can help to make our metropolises more humane, such as the pedestrianization of Times Square. And while many of the red flags raised in the documentary are not new to those who make urbanism circles their home, the film acts as an important, albeit beautifully shot and highly stylized, reminder of our need to be aware of the impact that our actions and decision will have, as we shape our urban environments.

But perhaps most simply and poetically stated, and acting as the theme throughout the film, is the question of, if we are human ourselves, why are we not building our cities at the scale of the human, or with people, rather than cars, finances, or political rationale, as our primary concern. For as ‘Chapter 5’ states, “It is very cheap to be nice to people.” Gehl has made it the trademark of his practice to design in ways that encourage community and spontaneity, engage people at an appropriate scale and speed, and focus on the spaces between buildings, as the areas which are meant to act as our truly public places, and therefore require our greatest attention and philanthropy.

What is of most interesting locally, however, is the timing of the film’s Ottawa premiere, and its correspondence to Ottawa’s “Safe Streets” proposal as one of twelve planning issues currently open for public consideration, as a part of the ‘Building a Liveable Ottawa 2031’ review of the City’s Official Plan, Transportation Master Plan, and a host of other urban-related city policies. This recognition of the need to create streets that are “designed to meet the needs of all people whether they choose to walk, bike, drive or take public transit” is a promising sign from the city that Ottawa is moving towards the people-focused urbanism emphasized in The Human Scale. And while what is planned and what is implemented is not always the same thing, Ottawa seems to be making a conscious effort to move towards more humane streets and sustainable development.