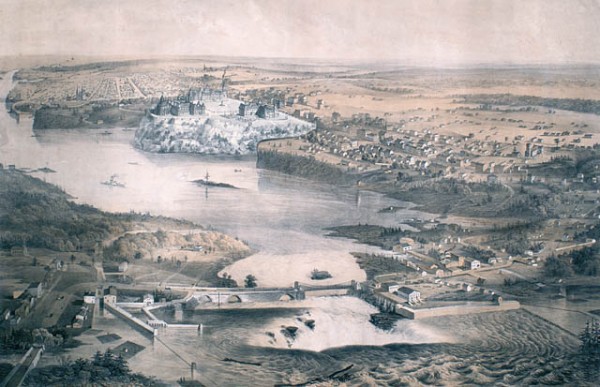 Today we at Spacing Ottawa would like to highlight some of the research currently being undertaken in regards to the Capital Region’s planning history, and in follow-up to the December article on Dr. David Gordon’s National Gallery lecture on the urban history of Ottawa. Planning Canada’s Capital, a compilation of the research being conducted by Dr. Gordon of Queen’s University, provides detailed information and numerous images of both historic and contemporary plans for the city, and is a rich resource for anyone interested in academic or historical research pertaining to the planning of the region.

According to the site,  Planning Canada’s Capital “contains texts, images and analyses of five plans that were prepared during the first half of the 20th century for Canada’s Capital Region. The component plans are Preliminary Report for the Ottawa Improvement Commission, 1903; Report of the Federal Plan Commission on a General Plan for the Cities of Ottawa and Hull, 1915; Planning and Development of Lindenlea Garden Suburb, 1919; Federal District Plan, 1922 and General Report of the Plan for the National Capital, 1950.  In addition, Links are provided to access the current plans for the National Capital Region, and some other related sources.”

For specific plans, and their associated images and analysis, referred to in Dr. Gordon’s lecture, the 1903 Todd report, Edward Bennett’s 1915 City Beautiful Plan, and Jacques Gréber’s 1950 plan can be found at their respective links. As well, an illustrated timeline of Canada’s Capital urban development can be found here.

Together, the site works as an extensive resource for those interested in the urban planning history of Ottawa and the Capital Region.