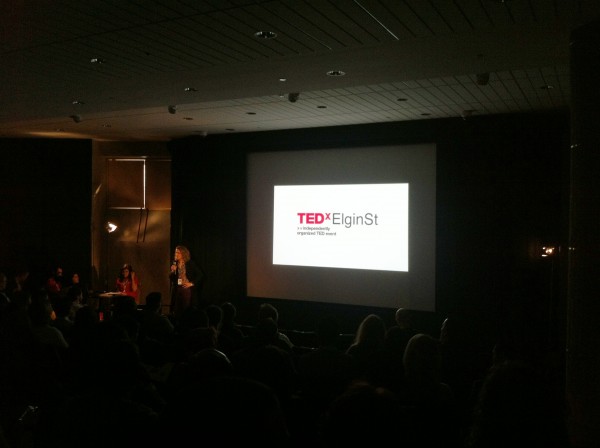 This past Saturday, in the darkened auditorium of the Canadian Museum of Nature – a setting and atmosphere synonymous with the famed TED Talks series – Ottawa hosted TEDxElginSt, the first independently organized TED event to be held in the city. With approximately 150 people in attendance, all of whom had to submit a 9-step application form in order to be selected for the invite-only event, in addition to a live-streaming online audience, those watching were encouraged to turn off their ringers, but turn up their tweeting as the days events got underway.

Hosted by political personality Ian Capstick, TEDxElginSt began with a burst of energy – once we were synced to the web – which continued throughout the day’s twelve speakers, all of whom presented 18-minute ‘talks’ related to the event’s theme of ‘Rethink, Rebuild’. Capstick explained that the theme was meant to look at “what ‘new’ Ottawa has to offer,” and to act as a reflection of the community, by whom the event had been organized. This theme also alluded to the idea that the city is currently undergoing great change, but that there still exists natural tensions between ‘official’ and ‘unofficial’ Ottawa, as well as the old and new aspects of a largely bureaucratic, historical, and yet creative city.

And it was for these reasons that the series was branded as TEDxElginSt and not TEDxOttawa. For according to the event’s Facebook page, “Elgin Street can be viewed as a symbolic dividing line. Standing at the South end, you look North and see what everyone thinks of when you mention Ottawa, but standing North and looking South, you see all the other things – the community. On the West, you largely have government offices and the business district. To the East, you focus on where much of the arts scene is located.”

Therefore, it was not much of a surprise that comments such as, “I can’t believe Ottawa could put on an event such as this…” were overheard multiple times, for it appears that we have a very low self-esteem of our city – a theme perhaps even more pervasive than the one planned – and which became subtly apparent in many of the talks, where Ottawa seemed to be cast by the general public as stagnant, a little boring, and possibly a bit backwards. (This included speaker Time Barber who comically shared his anecdote about arriving in Ottawa as a single, 20-something, grad students only to be told that the city was a great place to raise a family…. Something every young student is looking for…). Yet it was for these reasons that many of the speakers spoke so passionately about the city they loved.

And while there was a large range of speakers, both in terms of topics and their relationship to the city, those which best resonated with the audience seemed to be the ones who shared autobiographical accounts of their own stories, and how their experiences and work have helped them to ‘rethink’ and ‘rebuild’ their lives, the lives of others, and their world views – or at least views of the city.

For designer Michael Grigoriev such an epiphany came when asked to design a garment steamer, only to realizing there were already hundreds on the market. This led Grigoriev to a desire to use design in a more significant capacity for change and, noting that “Ottawa has a lot of government”, he decided to use his creative talents in a local municipal campaign which was attempting to move the focus away from the image of the candidate and to focus it to the ideologies of their platform. This shift from ‘design’ to ‘Design’, as Grigoriev put it, allowed for the campaign website to encourage public participation and engagement, with the understanding that the greatest asset we have in the city is the people and their ideas, and ultimately that these types of events, such a TEDx, show the change that is already beginning to happen in Ottawa.

It was the third session however, curated around the notion of community, that most closely united the theme of ‘Rethink, Rebuild’ with the event name of Elgin Street. Beginning with local architectural theorist and space practitioner Sarah Gelbard, graduate of Carleton’s Azrieli School of Architecture and Urbanism, those in attendance were treated to a presentation on how space can become place, in the line of philosopher Michel de Certeau. Gelbard wittily explained that she “loved architecture too much to be an architect”, and that while she was not a practicing architect, she believed that her work indicated that she instead ‘practices architecture’. As such, her work in Ottawa centers around the appropriation of public spaces, including parking spots and bus stops in which she creates installations or interruptions, under the belief that “place is practiced space.” Intrinsically, for Gelbard architecture is what narrates that city and as such, is never really finished.

Writer and editor Stephanie Vicente, later shared an open and honest discussion about her own struggles with mental illness, and the feelings of experiencing an identity crisis, which was interesting related by Vicente to the apparent complex and lack of self-esteem which Ottawa itself seems to be facing. Vicente went on to co-founded Herd Magazine as a form of expressive therapy and as a way to ‘herd’ the ‘cultural livestock’ she was surprised to find in a city often seen as only containing bureaucratic culture. It was this dichotomy that propelled her to create the magazine after having explored the city upon regaining her own self-confidence, and after hearing that her friends were surprised to hear of all the creative events and outlets she was finding in such a government town.

Armed with the belief that Ottawa is in fact a lively creative hub, if you look hard enough, Vicente is working to help reshape Ottawa’s own self-identity, just as she had worked hard to do for herself, and is aiming to “use this passion to better the creative community in Ottawa and bring together all corners of arts and culture together”. This insightful presentation thus worked to present the idea that Ottawa is perhaps in need of a renewed sense of self, one that can only come from self-discovery, as well as less mutual exclusion between groups, and Vicente drove this point home, closing with a plea for Ottawans to keep both an open mind and eye out for the next thing to be a part of in the creative culture of Ottawa.

Other speakers at the event included: Dave Conabree, who spoke on the topic of the importance of crowd sourcing and social networking in the public service sector, Jessica Tomlin, Executive Director of Match International who shared ‘6 Myths About Women’s Rights’ and her desire to transform our society, Tabatha Soltay on how we can use game-based learning to change how we approach disaster relief responses, John Gorman on the importance of solar power and how it can make us ‘prosumers’ (both producers and consumers of our own energy), Sean Blanda who presented a talk on ‘Rethinking the Career’ (which was especially important for the Millennials in the crowd), Nicole Belanger, who shared a moving story about her own life and how it has taught her to redefine how we define success in our own lives, and finally Katie Zeppieri whose talk on the power of the bystander left many in the room emotional.

The day also included a talk from James Boettcher, a promoter of food truck culture in Calgary and co-founder of YYCFoodTrucks, whose presentation focused on both the emergency use of food trucks, and the incredible coming together and resiliency of the community, in the aftermath of the 2013 Calgary flood.

The days events reminded all who were there or listening online that Ottawa is in great need of a renewed self-confidence, but that we also have more than enough reasons to be proud of who we are, and where we are hopefully heading. Yes, there are many areas for further improvement, and yes we still have a long ways to go, but there are small, breakout moments happening all over the city, you just have to know where to look to find or hear them. We can be a creative city, we can be more than just a government town, but we need to tap into that, celebrate it, and continue it.

Host Capstick closed the event with the fitting line, “We don’t need to want to move to Toronto or move to Montreal anymore…”, grasping the optimism and sentiment of the day. He then challenged the audience asking, “Are you going to get involved? Set up that food truck, appropriate that parking lot…” And with that, TEDxElginSt closed as a step in the right direction, and hopefully one which will continue to shine a light on the small voices in our communities which could really help us to better shape ourselves, and our city on a personal, national, and international scale, if only we give them a venue to be heard.

Overall, TEDxElginSt was full of great talks relating directly to the theme of ‘Rethinking’ and ‘Rebuilding’, in a tightly run and well organized event. The one regret I have, however, was that there was not more local content or speakers from Ottawa, despite the event being centered around not only the city, but a very specific street within it. For while all of the speakers were articulate, significant, and interesting to listen to, it would have been a wonderful opportunity to fully feature the talent that has been homegrown in our own backyard. For this event showed us that we already have the talent, ideas, and people in the city to put on a fully local event. Perhaps we just need the self-confidence to do so.