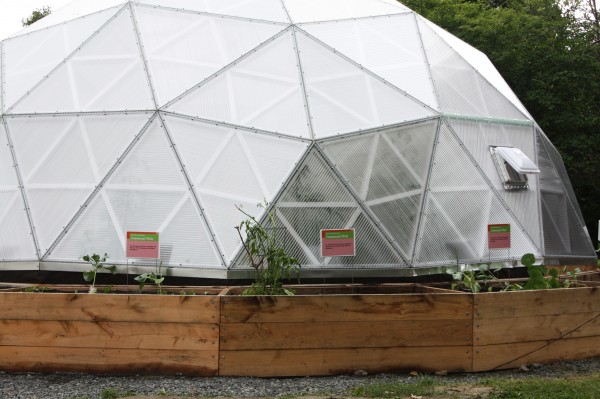 With the recent opening of the first biodome garden in Ottawa, Spacing Ottawa had the opportunity to speak with the designer of the dome structure, Martin Buffam, president of Future Food Biodome Systems, on his experience and hopes for the project.

The pride Martin Buffam takes in his work is evident; from the level of craft in the quality of construction, to the tone of enthusiasm and excitement you can hear in his voice when discussing the project. And he has good reason to feel proud, having designed and built the first biodome garden structure in Ottawa.

With a background in alternative construction methods, aquaponics, and passive and active solar design, Buffam was first approached by the Brewer Park Community Garden a little over a year ago, with the vision of building a biodome greenhouse which could house both tradition soil beds as well as a possible aquaponic system, and which would in turn allow for a greatly extended growing season for locally grown food in Ottawa. 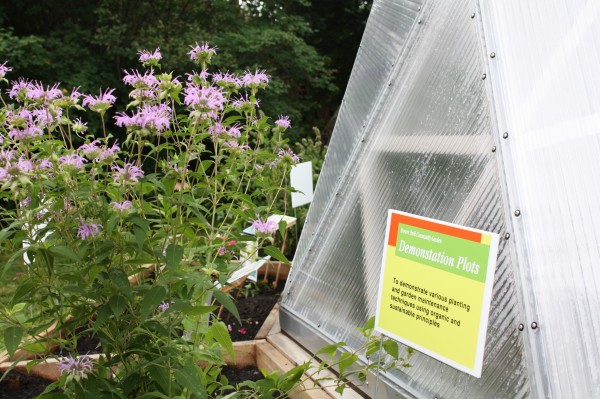 Buffam, who had previously lived in Ottawa and was familiar with Brewer Park, was brought on board to custom design and build a geodesic dome structure from the ground up, using his technical and practical skills in both construction and different growing methods, to supply the dome once funding was secured.

The design of the dome was a project in itself, taking approximately six months to determine the engineering, using formulas to determine the size and geometries, and included customizations such as ensuring that the access door was full accessible. Buffam explained, “It’s more than just a product, it’s a scientific thing you might say – I have a more craftsman’s-like approach to what I do. So to me it’s almost like an art installation – it’s a one of a kind thing. There are as many domes as people who build them” 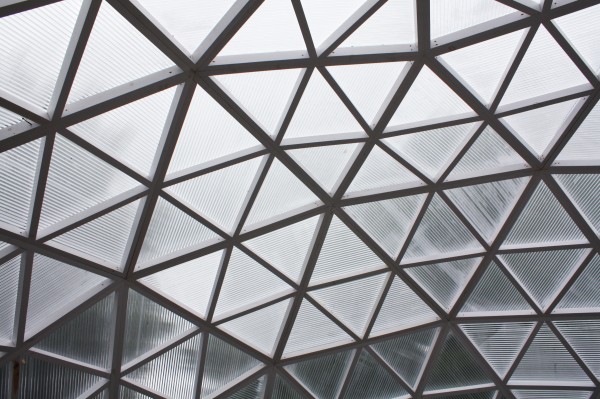 The dome, which is made up of a series of triangular planes attached at vertices, differs from conventional domes – where each corner or node acts as a stress point – having been designed so that the struts are continuous, with each strut connected to the next. In this sense, the dome is more like a spider web than a network of pressure points, allowing for the load to be spread out more evenly over the entire of the structure. This allows for the dome to be much stronger when it comes to stresses, such as the heavy snow loads Ottawa receives. Buffam, who has an interest sacred geometries and bio-mimicry, continued, “you don’t see squares and rectangles in nature, you see eggs and dome structures and bubbles, spheres – they are incredibly strong.” 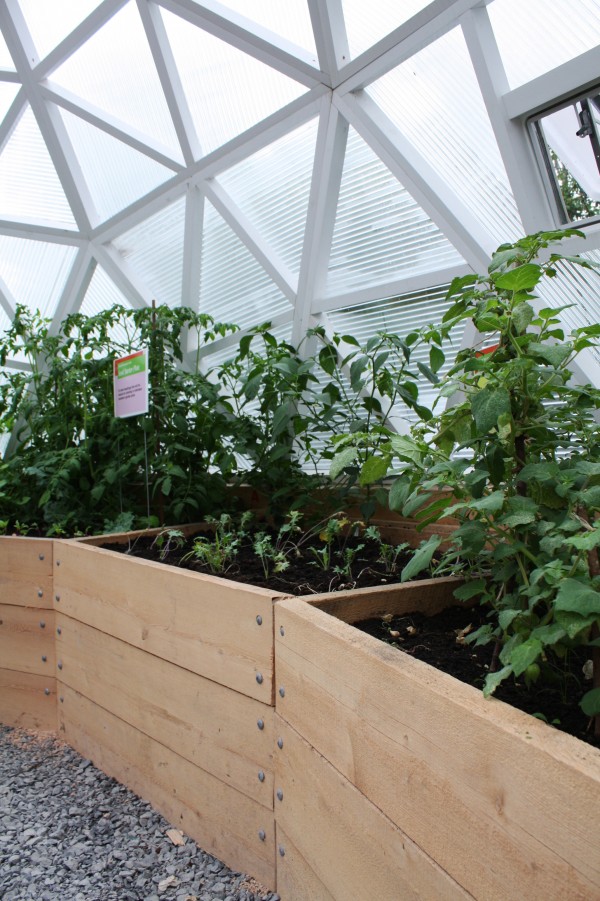 The struts themselves are also made from locally grown and sourced woods, while the glazing is a robust, high quality, 100% recyclable polycarbonate which is UV stable, and strong enough to be considered roofing material – adding extra strength to the already strong dome system. The polycarbonate also lessens the overall embodied energy of the project through its extended life span of 30-50 years, and added thermal value. It is considered to be superior to glass in instances such as this as it does not discolour, or chip, and it will no break or shatter. Alternatively, traditional greenhouses use polyethylene, which typically lasts five years before it needs to be recoated.

When asked about the benefits of a biodome structure over a tradition greenhouse form, Buffam explained that whereas the typical rectilinear, pitched roof greenhouse involves a less critical design and construction process, its use of one plane pushing against another lessens its structural strength. In addition, the circular form of the biodome allows for a greater amount of light to reach the plants as the form of the dome enables the suns natural movement to be optimized as it sweeps around the grow beds along the circumference of the dome, in addition to allowing air to circulate more efficiently. 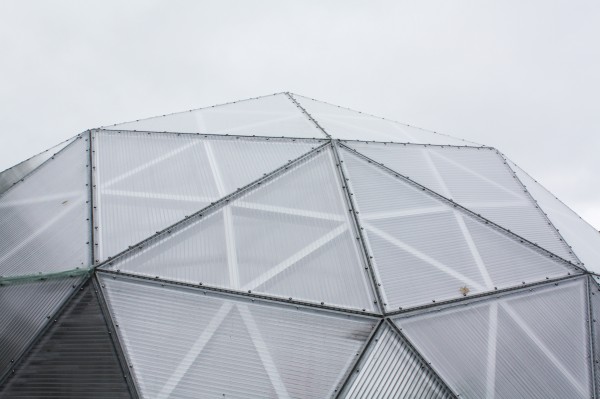 The dome, which took 6-8 weeks to construct on site, faced its biggest challenge when it came to its actual construction, thanks to Ottawa’s rainy, and unpredictable weather this past summer. And this thought brought Buffam to his hope for the project. “I hope it becomes a place for people to go and understand controlled environment agriculture,” said Buffam. “Whether or not you accept global warming or climate change… climate is changing dramatically, radically… we have extreme rain, extreme cold, extreme drought, extreme heat, [we] can’t count on the weather any longer.” 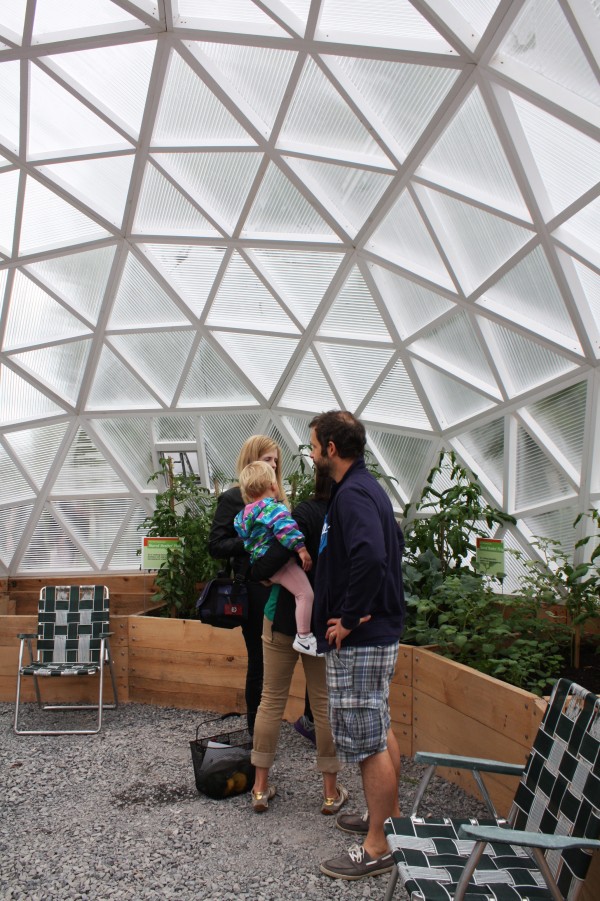 It is this need to both adapt to, and help counter the increasing changes and environmental concerns our planet is facing that is at the very heart of the project. “I think controlled environments will become more and more important as people want to buy local food, and produce it in their own back yard. Ideally we want to grow it in the ground, but that isn’t always going to work,” Buffam explains. “The thing about greenhouses, in my opinion the dome is the best form of greenhouse, in that we can control the environment in the space so we have a much longer growing season, and so we can predictably produce food for our communities. My vision for that community garden is for people to learn how to produce food locally and in a community setting – that’s ideal.”

And with the opening of the biodome last month, the Brewer Park Community Garden is off to another great start, thanks to Buffam’s biodome.