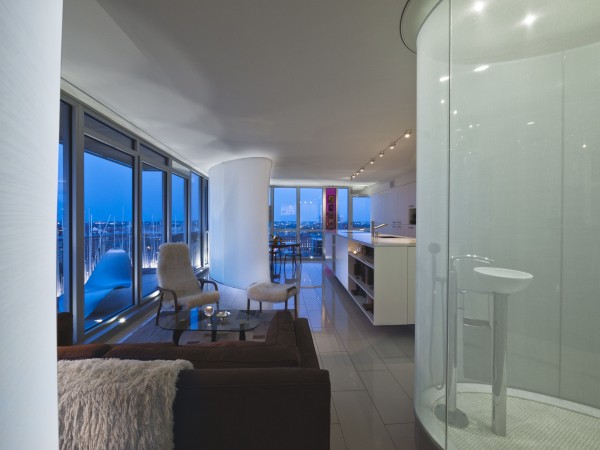 Paul Kariouk is an energetic guy. From artistic ways to maximize space, to simple approaches cities can take to make themselves more liveable, his mind never quits exploring the possibilities. And when it comes to his apartment, I believe he has literally thought of everything, as will be revealed in his tours during Ottawa Architecture Week.

“This is the biggest apartment and highest floor I could afford. I bought the most generic apartment I could find – a basic box – knowing I could completely reinvent the space,” Paul says by way of introduction.

For starters, his 850 square foot condo was clearly intended for one person, a couple at most, yet devoted almost half its space to accommodating two bedrooms.

“For what?” groans Paul. “For the five days a year you’re going to have guests in your spare room?! We’ve got this weird idea in North America that we all need a spare room, but it’s just wasted space. You don’t even need a dedicated office these days because everyone works off their laptop and mobile devices.”

Initially, the bedroom in question not only cut off the living room’s south-facing view, but also stole all the sunlight. Further, the only way to enter that bedroom was to pass behind an unsightly column that housed the air unit, otherwise walk through the bathroom, a surprising go-between space that connected the bedroom and the kitchen.

For Paul (principal of Kariouk Associates and associate professor of architecture and urbanism at Carleton University), choosing an apartment or designing your own space always begins with the question: What features do you absolutely need to support your lifestyle? And then: Which elements of your home have the flexibility to move or adapt?

“Architecture is not about cosmetic decoration; it’s about resolving very real, pragmatic issues and concerns,” Paul affirms. “My partner and I needed twice as much kitchen space, and we needed to double the storage space. We all have junk and need a place to hide it away. It’s a question of how do you use every molecule of space and resolve everything pragmatically?”

Removing the bathroom not only opened up more space for the kitchen but yielded prime real estate, where Paul gleefully inserted floor-to-ceiling cupboards in a space unbroken except for one sleek, silver fridge, and one small cubbyhole for a kettle or flower vase.

This kitchen is (almost) the first part of the apartment you see, after being welcomed into the generous foyer. Which offers an interesting perspective itself. The first thing you see is…(can it truly be?) a… urinal?! Well, that’s what it was originally intended to be, but Paul foresaw different uses.

“The urinal’s anti-splash design makes it the perfect drinking bowl for my dog!” he exclaims lovingly, in reference to his 150-pound dog that indeed looks like it would make mincemeat out of a typical bowl.

But more than that, standing in the foyer affords a unique glimpse into the room straight ahead…which seems to be a bedroom, judging by the pillows one can see.

Paul is clear on the intent. “Having this gap between the walls offers a tantalizing glimpse into the next room; it creates a sense of momentum and openness, without making you feel like you’re intruding on a private room. ”

This is one of Paul’s key tenants; that by playing with angles and positioning, you can grow your space. Case and point? His never-ending kitchen counter, which stretches an impressive four or so metres in length. But that’s not all, his kitchen counter is wider at the entrance and tapers off at the far end, greatly prolonging its appearance.

Of course, one is so fixated by the never-ending counter that you initially overlook how the floor-to-ceiling, translucent “column” you’re standing next to is actually … the shower! It’s entirely see-through, unless you are inclined to open a small cupboard within arm’s reach and pluck out curtains to ride the ceiling tracks and sheath the shower from view. (A cupboard that, like everything else in the apartment, was custom-built for this exact purpose). And should you not feel so modest, you can crank up the shower’s studio lights and shine a spotlight on yourself…

Now for the reason why all the cupboards and walls inside the apartment are white?

“There are so many things that already have colour: light, plants, furniture…” Paul explains. “White brightens things. With my white, reflective floor, you can see the sky during the day, which makes a small space seem cheerier.”

Standing at the edge of the living room – now double the size of when he first bought it – he casts his eyes wistfully down the long, loping straight of Bank Street where, 17 storeys below, street lights highlight evening amblers and car headlights cast their glares to and fro.

Having lived there for four years now, Paul has seen the number of downtown dwellers grow. But is intensification working the way it should?

Paul sighs. “The first thing to ask is what steps can you take to make downtown as seductive as possible?

“The answer is pedestrian networks, so people can walk around where they want to walk!” he exclaims. “The greatest quality is having sidewalks; ideally seven metres wide, allowing you a couple of metres to accommodate mature trees.” He shakes his head. “Some of our sidewalks are only two-to-three feet wide, and the developers have been targeting our most narrow streets to build their condos, which results in that horrible ‘canyon’ effect.

“Instead of spending money on street art projects, let’s put it into creating wide sidewalks with landscaping,” Paul urges. “As soon as we put in nicer streetscapes and green spaces, property values go up. Build that and the people will come.”

Back inside his apartment, having belatedly noticed the shower and not seeing anything that resembles a toilet, the burning question is where did he relocate his bathroom?!

To uncover that, you will have to take Paul’s “Re-developer Apartment” tour, offered several times throughout the day on Wednesday, October 1 as part of Ottawa Architecture Week.