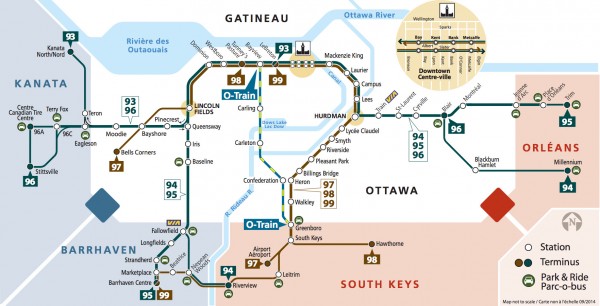 While sitting on a bus in Ottawa this past summer, I found myself doing a double take out the window – but not for any reason you may guess. In fact, I was not looking out the window so much as looking at it. For right there, in all its window-cling, transparent glory, clung a striking map of Ottawa and its transit way.

Its simplicity is reminiscent of Toronto’s subway maps, or those of London’s tube system – although not nearly as complex as the latter – and its bold, clean graphics give a visually efficient reading of the city in its totality.

Gone is the clutter of the street grid, and while not to scale or indicative of the expanse of the greenbelt, it gives a sense of the major points of connection in our city, as well as the water ways which we often forget greatly influence our travel across the city. There is even graphic representation of ‘Rideau Island‘.

With maps and wayfinding symbols being a hot topic in urban design, it is encouraging to see OC Transpo keeping pace in the lead up to what our LRT maps may look like someday down the transit way.