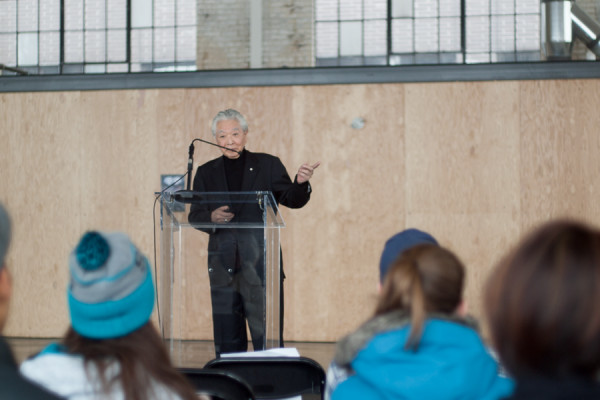 The theme of the talk was how nature influenced the design of the Canadian War Museum – a project Moriyama’s firm completed in partnership with Ottawa firm Griffiths Rankin Cook. Moriyama invited the audience to read between the lines of the poetic, familiar stories (often repeated in architecture school studios and in the press) that spoke to the many ways in which inspirations from nature allowed the design team to handle the contradictions of creating a memorial to war for a peaceful nation.

The architect began the story with his first building: a treehouse built on a British Columbia internment camp for Japanese-Candians during WWII. He spoke of the how the sound of the breeze through the treehouse’s planks influenced the very first conceptual sketch of the museum as horizontal mounds reverberating with sound. The two mounds of the sketch – one representing the museum and one the Gatineau Hills seen looking north at the site from Booth St – also show the ambiguity between the built museum and its natural surroundings. The museum was never to be a distinct object of architecture, but rather a regenerative landscape inspired by the soft, lush mounds now growing and healing the landscapes once torn apart by the trench warfare of World War I. Instead of a glorious imposing tower, the museum was designed as sloping landscape visually connected to Parliament Hill’s Peace Tower, and reflecting the quiet strength and modesty uncovered in many interviews with Canadians throughout the design process about what a national war museum should be: a place that honours the sacrifices of all war efforts, and also looks to a hopeful, peaceful future.

The idea of creating connections between the past and the future is something Moriyama spoke about with great conviction and urgency on Saturday, not particularly regarding the museum, but of its neighbouring site the Chaudiere Falls, which also include the contentious Domtar Lands. Moriyama acknowledged the sacredness of the site to the First Nations and its importance to the beginnings of Canadian history, before sharing his outright contempt for the site’s proposed development into condos and commercial space by the Windmill Group, calling the private venture “heart sinking and idiotic.” In this matter, Moriyama has offered to stand hand in hand with Ottawa architect Douglas Cardinal, who has been championing departed Algonquin Chief William Commanda’s vision for the land to be returned to a public meeting place for all nations that also celebrates its sacred past through the building of a national indigenous center.

Returning to the talk’s theme of nature’s influence on his work, Moriyama mused about how his flight had left Toronto twenty minutes behind schedule that day, only to arrive in Ottawa just five minutes late – a feat achieved because the flight was taken in the same direction of the prevailing winds. In remaining hopeful about the future of the Chaudiere Falls, one can’t help but read between the lines of Moriyama’s own musings and wonder about the great legacy that could be built if Windmill and the Aboriginal community could work with the winds of each others’ voices to bring dignity and honour to a site where the falls once roared, calling nations together for healing and reconciliation.