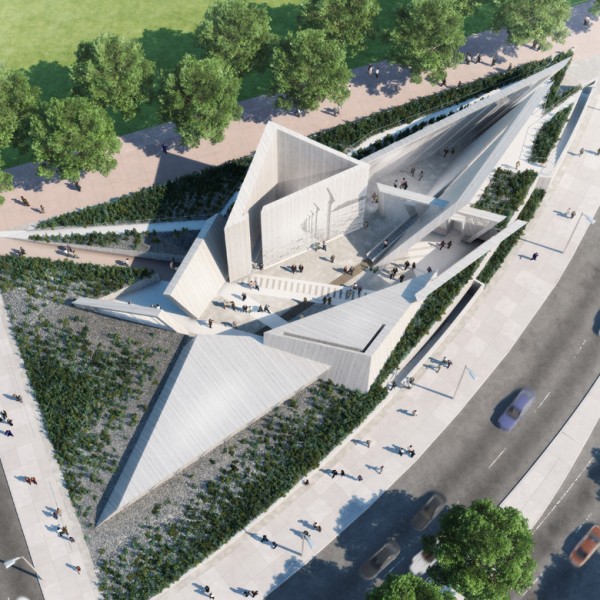 With January already out of the way, 2015 is shaping up to be a very interesting year for Ottawa. During the past 12 months the federal government selected the winning design teams for two new memorials within the city adding to the already extensive portfolio of monuments in the Capital region. Both the National Holocaust Memorial, designed by Daniel Libeskind, and the Memorial to Victims of Communism, designed by ABSTRAKT Studio Architecture, are slated to begin construction this year.

So when the Azrieli School of Architecture and Urbanism at Carleton University announced the line-up for their annual lecture series in the fall it was exciting to see the inclusion of Daniel Libeskind in addition to Douglas Cardinal, the architect of the Canadian Museum of Civilization (renamed the Canadian Museum of History in 2013). To make things even better their lectures were only separated by two weeks. Both lectures took place in January and having the lectures in such close succession offered a rare opportunity to hear the perspective of an iconic architect responsible for one of the National Capital Region’s enduring landmarks as well as the architect charged with the task of creating a new one.

Douglas Cardinal was an architectural heavyweight in the 1980’s and early 1990’s. In Ottawa he is of course best known for the Museum of Civilization but he has many other notable projects including the National Museum of the American Indian in Washington, D.C.. Although the big commissions have since tapered off Cardinal continues to practice even at the age of 80 with many projects commissioned within, and for, First Nations communities.

Though he may no longer be a household name, when he begins to talk about his projects you quickly realise the breadth of his experience. His lecture reminded me of what I have come to know as a truism – great architects are also great story tellers.

While discussing how the Museum of Civilization came to be, Douglas Cardinal described a lengthy meeting with Pierre Trudeau, the Prime Minister at the time, where he was ultimately asked how soon they could start construction. He drew a chuckle from the crowd when said that he had to inform the Prime Minister that he only had sketches at that point and that Quebec still owned the property on which the museum would eventually sit.

He recalled the Prime Minister stressing the importance and urgency of the project reminding him that this is a democracy and although things take time, decisions can be undone if too much time elapses (mainly if another political party takes power).

For this reason the 1980’s were also quite an interesting and exciting time for the City for Ottawa. During Trudeau’s reign the National Gallery of Canada was also commissioned and constructed by the Federal Government here in Ottawa and was completed only one year ahead of the Museum of Civilization. The National Gallery was designed by Moshe Safdie who had gained international recognition for his design of Habitat 67 and would later design Ottawa’s former City Hall.

Not unlike Cardinal or Safdie in the 1980’s, Daniel Libeskind comes to Ottawa with an established reputation and whether you like the aesthetic of his work or not, he has made a career of designing landmarks. For those of us in Ontario we most likely think of his controversial crystalline addition to the Royal Ontario Museum (ROM) in Toronto however that is only one of many significant projects that he has completes.

Not surprisingly, Libeskind is also a great storey teller; he was engaging and speaks with enthusiasm and passion on the topic of the Holocaust as it is one that resonates very closely with him. He was born to Holocaust survivors in communist Poland following World War II during a time where anti-Semitism was still very present. This, of course, stayed with him.

During his lecture he discussed his design, for the Jewish Museum in Berlin, his first project to receive international acclaim. As he talked us through the design Libeskind described his struggle designing part of the building called the Holocaust Tower which was going to be empty, with no openings except a door leaving the inside completely dark. He goes on to tell us that he came across an account of a Holocaust survivor, by accident, who had found strength in a crack of light while locked in the cattle cars. That storey inspired Libeskind to add an opening allowing a sliver of light into the tower – that sliver of light representing hope.

This sentiment echoed something he said at the outset of the lecture when he asked us to consider what it is to create a monument of this nature – “How do we preserve a memory of evil while introducing a sense of hope?”

His question is a reminder that the stories of our past shape our future and it is often the role of monuments and museums to record and remember these stories. With the addition of these new memorials it is an interesting time once again for Ottawa as we reflect on history and look to the future through these monuments.