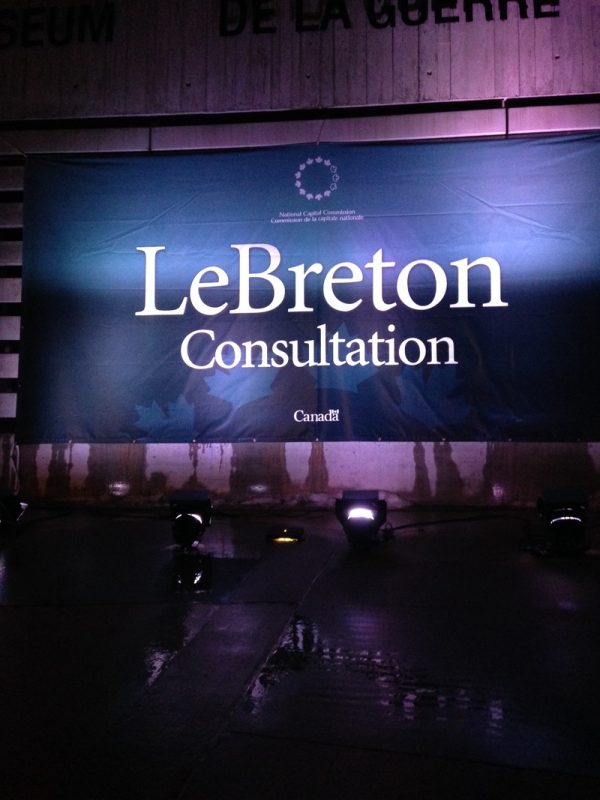 Now that we are a couple months removed from the public presentations and consultation process for the redevelopment of Lebreton Flats I am anxious to see what recommendations will be made to the National Capital Commission (NCC) Board of Directors by the evaluation committee.

Their recommendation along with a summary of the public input that was compiled for the committee will be made public sometime this spring.

As we await their recommendation, I can’t help but wonder what influence our input will have on the committee’s decision, if any at all. I am optimistic that the more than 7,900 people who submitted comments will feel as if they were a valued part of the process through some correlation between the summary and the selected design. However, the public engagement process has left me with some reservations.

The magnitude of the Lebreton redevelopment demanded more than a few public presentations and two weeks to provide comments through an online questionnaire. While we likely won’t see another project of its size or prominence in the near future it does call into question whether the current public engagement strategies are adequate. I would argue that they aren’t.

To date Ottawa has championed the online questionnaire for gathering feedback from citizens. As mentioned, for the Lebreton redevelopment this tool was employed in conjunction with the question period of the public presentations.

Similarly, although it may be a distant memory to some now, the City undertook the Liveable Ottawa 2031 project two years ago which also consisted of an online questionnaire.  The perspective gained from this exercise was supposed to play a role in influencing public policy in Ottawa which would be reflected in the amendments to the Official Plan, Transportation Master Plan, Infrastructure Master Plan, Cycling Plan, and Pedestrian Plan.

Yet some of the Liveable Ottawa questions were too ambiguous and were left open to interpretation as previously noted by yowLAB and the Ottawa Citizen. Additionally, it is still unclear to me how the information gathered was put to use.

I think we all appreciate the opportunity to provide feedback but without an understanding of how it will be put to use, the incentive to continue participating diminishes.

While it is easy to dissect the shortcomings of the public engagement strategy for the Liveable Ottawa project or Lebreton Flats, the City has struggled with this on other projects as well. Some of the recurring issues include seeking public input too late, a lack of clarity regarding how the public’s input is factored into decisions, and gathering feedback at one stage of the process only.

It is time the City improved on this as too many significant projects have missed out on the opportunity to learn from the mistakes of past projects, which could help to improve their public feedback strategies for future landmark or legacy projects. The volume of the turn out to the Lebreton Flats public presentations is evidence of the public’s interest in Ottawa’s built environment and collective future.

First, let’s acknowledge that incorporating public participation is a challenging endeavor and it is impossible to achieve full consensus. The City must walk a fine line and balance how much decision power they are willing to, and can concede while still ensuring a successful outcome. Ottawa is fortunate to have an educated and engaged general population who can collectively yield fruitful feedback, which should be considered alongside the opinions and work of professionals.

To refine the current public engagement strategy it is important to look broadly for examples that Ottawa can emulate and adapt as its own. An excellent starting point would likely be Christchurch, New Zealand, whose public consultation process for the redevelopment of its city center following the massive earthquakes in 2010 and 2011 has been heralded.

One of the main takeaways should be their early and consistent inclusion of public feedback. They began with the 6-week ‘Share an Idea’ campaign which garnered over 100,000 comments from which they were able to establish six main themes. These were: Green city; Stronger built identity; Compact core; Live, work, play, learn and visit; Accessible city; and Embrace cultural values. In addition to online questionnaires, during the campaign there were more than 100 meetings, an expo, and a 48 hour design challenge as part of the idea collection process.

The themes that emerged echoed what most professional planners advocate for yet because these themes emerged from the public feedback there is an opportunity for shared vision. While not every project will be at the city scale the principle here is that allowing public feedback to play an impactful role in determining the goals and desired outcomes of a project can lead to a stronger interest in further public participation. Additionally, it generate an overall feeling of being a part of a city that moves forward collectively. Furthermore, this strategy can be scaled; the more significant the project, the more inclusive the process.

With these themes established the Canterbury Earthquake Recovery Authority –the group responsible for the recovery strategy–put together the first Draft Central City Plan and initiated the ‘Tell Us What You Think’ process. The citizens were invited to participate in the process by providing feedback on the initial draft, garnering nearly 3000 comments.

Once a revised draft was prepared based on these comments the public was again invited to participate. Following this last round of comments a professional group worked to produce the Blueprint, Christchurch’s Central City Plan.

When we compare the process implemented in Christchurch with the Lebreton Flats public engagement strategy, the Lebreton process appears totally inadequate. Looking back the NCC’s request for proposals was extremely open-ended which was both good and bad. For example, the NCC could have engaged citizens with a campaign similar to ‘Share an Idea’ in order to provide the design teams with a list of public anchor projects the community would like to see while still giving them the freedom to propose unique and exciting projects that were not previously considered.

The two week window allocated for feedback on the two visions for Lebreton also felt rushed. It takes time to digest all of the information and go beyond the seductive renderings, especially considering this was the only opportunity to submit feedback.

As designers it is easy for us to assume that we know what is best for our clients, yet it is also a very dangerous game to play if our assumptions are proven wrong. While I don’t think this was the case at Lebreton when it comes to landmark or legacy projects that will impact Ottawa for years to come the NCC and City need to have a more inclusive and transparent process. That way even if we don’t agree wholeheartedly with the decisions, we at least with an understanding of how and why they were made and we can trust that our voice was heard and we collectively contributed to the process.