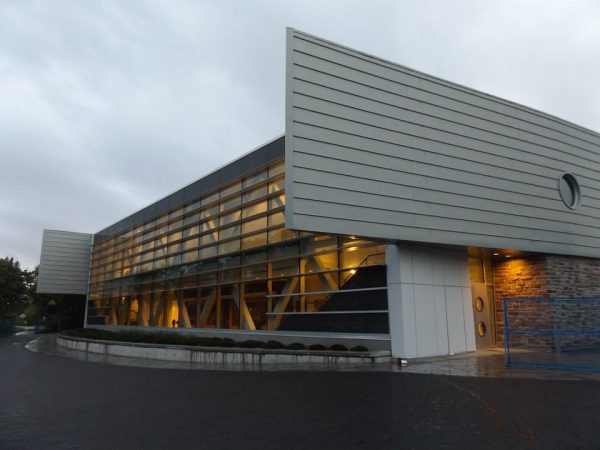 It is year fifteen for Doors Open Ottawa’s celebration of the city’s rich architectural and cultural heritage.  Organized by the City of Ottawa, Doors Open remains the second-largest architectural event in North America. Since 2002, over 850,000 visitors have been discovering some of the city’s most impressive places, many of which are not normally open to the public. 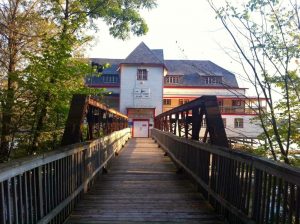 On June 4 and 5, doors will be open to more than 120 such places. People will be free to visit a range of remarkable buildings from embassies and places of worship to architectural firms, artists’ studios, science labs, and museums.

Two exciting last-minute entries have just been announced: The Sir John A. Macdonald Building (former Bank of Montreal) at the corner of Wellington and O’Connor streets and the Wellington Building across the street from Parliament Hill. The rehabilitation of the Sir John A. Macdonald Building—an outstanding federally owned Classified Heritage building—has won numerous awards. It’s only the second time since it reopened last year that the public will have access to its lavish interior. The Wellington Building (former Canadian headquarters of Metropolitan Life Insurance) just reopened after an extensive restoration and modernization that saw the dramatic ceiling mosaic meticulously restored piece-by-piece along with the installation of environmentally sustainable features such as a new a green roof, solar hot water panels and a glazed atrium. 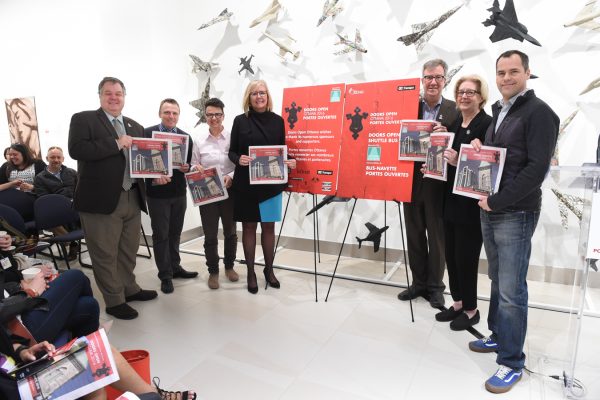 Mayor Watson is joined by councillors, Doors Open organizers and building participants for the event launch at Shopify Headquarter at 150 Elgin Street

Doors Open Ottawa launched this year’s event on May 16 at Shopify’s new Elgin Street headquarters. Mayor Watson made it official and guests were treated to a teaser tour of Shopify’s six themed floors. During Doors Open weekend visitors will be given the chance to see first hand the meaning of a redefined 21st-century workplace!

We are pleased to announce the return of some of Doors Open Ottawa’s all-time favourites, like the Supreme Court of Canada, the stunning Art Deco French Embassy; Earnscliffe, the residence of the British High Commissioner and home to Canada’s first Prime Minister; and the historic—and believed to be haunted—Carleton County Gaol, now HI-Ottawa Jail Hostel.

Visitors will also have the chance to discover the fascinating world of conservation at the Canadian Conservation Institute. Here science meets heritage in the preservation of important archival, museum and national historic site collections from across the country. 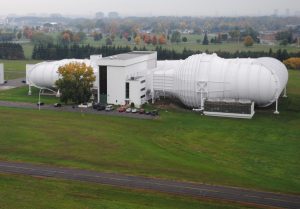 Celebrating its centenary this year, the National Research Council (NRC) has come on board with two facilities. Doors Open Ottawa offers a rare opportunity to see inside the NRC’s Sussex Drive laboratories—a national historic site that connects scientific spaces with lavish architectural detailing.  Then visitors can let their inner engineer loose at the Uplands Wind Tunnel, home to sophisticated aerodynamic testing. A range of demonstrations are planned that will amaze not just the kids!

This year, Doors Open Ottawa welcomes 20 new building participants, including Carleton University’s cutting edge Immersive Media Studio where innovative, hybrid applications of digital technologies for architectural rehabilitation and conservation are developed. While on campus, visitors can experience the Discovery Centre at MacOdrum Library, a collaborative workspace equipped with gaming lab, wall-sized screens and treadmill desks that is changing the student learning experience. Before leaving Carleton, check out the Ojigkwanong Centre for Aboriginal Culture and Education’s permanent ceiling installation. Made up of dynamic interwoven patterns, Light Keeper was designed by Prof. Manuel Baez and his students in consultation with Douglas Cardinal, the Centre’s architect. 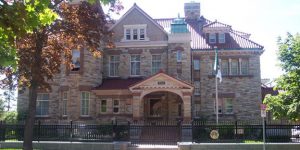 Not to be outdone, the University of Ottawa is opening its Advanced Research Complex, complete with a 44-tonne accelerator mass spectrometer and world-class photonics laboratories, along with its new Alex Trebek Alumni Hall, an adaptive reuse project that combines two splendid Victorian residences in the heart of the campus’ historic quadrangle.

The range of other new participating buildings is vast. From the Islamic Society of Cumberland’s strikingly modern Bilal Mosque and HMCS Carleton’s new state-of-the-art naval training facility at Dows Lake to the Ottawa Valley Wild Bird Care Centre and the Rideau Valley Wild Life Sanctuary, all will be open and ready for visitors. 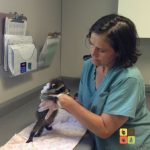 If people are weary of walking, the Ottawa Citizen Doors Open Ottawa Shuttle Bus will be operating free of charge all weekend to over 50 participating buildings. (Information on stops and service can be found at ottawa.ca/doorsopen.  Or, take the opportunity to cycle around the city on a Doors Open Ottawa bicycle tour offered by Ottawa Cycling Tours and Escape Bicycle Tours.

The comprehensive Doors Open Ottawa Event Guide, which includes building descriptions, details about participating times, parking and washroom availability, and disabled access will be distributed with the Ottawa Citizen and is available at City Hall, Bridgehead Coffee Shops, and at all participating buildings. 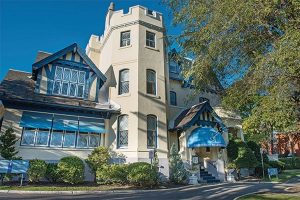 To find all Doors Open Ottawa information at your fingertips, including an interactive map, visit: ottawa.ca/doorsopen.

On June 4 and 5, join the many residents and visitors to Ottawa in discovering the city’s stunning architecture and enticing cultural spaces.  Whether you’re an architectural enthusiast or just looking for a weekend of free fun with friends and family, Doors Open Ottawa is a weekend not to be missed!