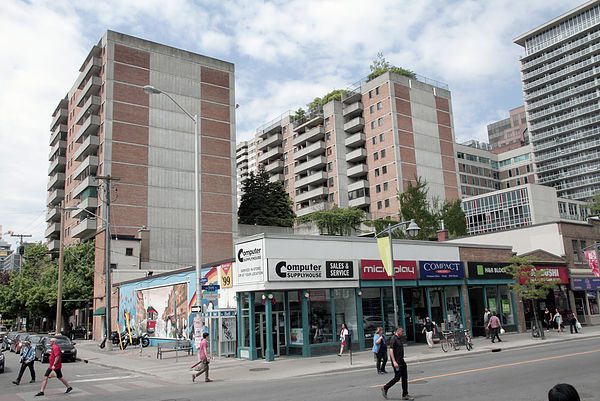 An easily overlooked building in Ottawa’s Centretown features a unique amenity which, while in plain sight from the street, generally goes unnoticed by passersby: between two 13 storey towers, on top of a four-storey parking garage roof, is a park, with 20 ft spruce trees, a sandbox, bench seating and open grass. From the street, the vines growing six stories up the northern tower, along with the trees and overgrown vegetation on the roofs, seem to be slowly overtaking the aging structure. From above, an order designed more than 30 years ago is seen to be more or less intact. The geometric timber planters have built in benches and support a variety of trees, including many which remain from the original planting in 1985. The two towers and parking garage, collectively known as Nepean Place, were built in 1985 as a joint venture between the City of Ottawa, the Centretown Citizens Ottawa Corporation (CCOC), and what is now the Ottawa Community Housing Corporation (OCHC.) The City operates the parking garage, OCHC operates the tower at 215 Nepean, CCOC operates the tower at 210 Gloucester and both OCHC and CCOC collectively manage the landscaping and equipment placed on the deck above the parking garage. The project architect for Nepean Place was W.G. Mohaupt, who worked on a number of non-profit housing developments in the city. Corush, Laroque, Sunderland and Partners ltd were the landscape architects.

Minor variances, which allow developers to obtain a building permit although the property does not comply with zoning by-laws, were given to Nepean Place’s developers to forego the expected 30% landscaped open space at grade (street level). The city planners felt the proposed landscaping on the deck of the parking garage and on the roofs of both towers justified not offering any green space on the ground, enabling the developers to utilize a larger footprint. Unlike its Mechanicsville counterpart, the Nepean Place deck appears to be well used and there’s an interesting mix of private and public life. The landscaped deck is accessible to residents of both towers and fourth floor residents whose apartments face on to the park have terraces which blend into the shared area. Balconies overlook the space, some just metres above. The view of the city is unique: the spire of Saint Patrick’s on Kent rises to the west and, to the north, highrise offices and condos. The roofs of both towers were both initially landscaped, but 215 Nepean’s is no longer accessible and the plants have either died or been removed. Residents tend vegetable gardens on the roof of 210 Gloucester, and some original trees remain. Beyond a curiosity of planning and architecture, Nepean Place is a reminder that the Nation’s capital has fallen behind other Canadian municipalities which have developed policy to incentivize and regulate green roofs. In 2010, Toronto became the first city in North America to require and govern the construction of green roofs on new development. The Toronto bylaw applies to new building permit applications for residential, commercial, industrial and institutional development. Green roofs provide a number of benefits, particularly by reducing urban heat island effect and managing stormwater. Considering Ottawa’s mayor has shown support for and made actions towards passing a similar bylaw, it appears to be only a matter of time for Ottawa.