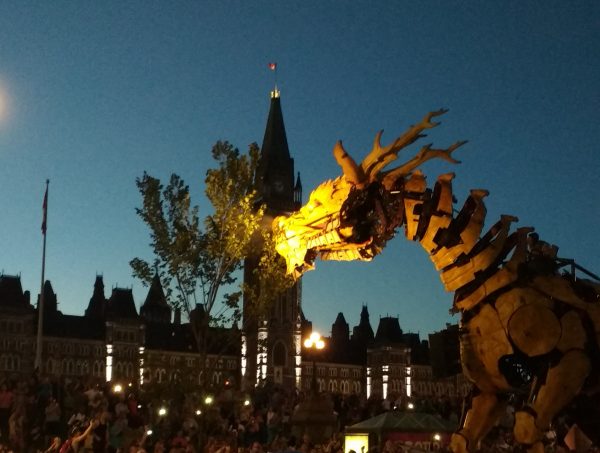 From Thursday July 27th to Sunday July 30th, La Machine – a French-based street theatre company – made their North American début in Ottawa. The performance – “Spirit of the Dragon-Horse, With Stolen Wings” – featured Long Ma, a 12 metre high fire-breathing-horse dragon, and Kumo, a 6 metre wide (13 metres when in motion) water-spewing spider. In precise and calculated choreography, the colossal mechanical monsters wandered through the downtown core and did battle. Long Ma emerged triumphant, and a presumed mythical cosmic balance was restored.

La Machine was touted as one of Canada 150’s/Ottawa 2017’s signature offerings and by many indicators, it seems to be among the more successful events. Not only did the performance draw enormous crowds, but it has mostly avoided drawing significant critical ire. But are these the only ways of marking success?

Enthusiastic responses to La Machine furnished ample proof that those who live in and visit the city are game for urban spectacle. Restaurants in Byward Market ran out of food and the streets were so saturated for Friday evening’s scenes that the city tweeted asking people to avoid key sections of Wellington Street.

Perhaps drawing this kind of response is a sufficient accomplishment for now, after all, it inspired, enchanted, and, as Jeff Leiper in the Ottawa Citizen claims, “was a successful exercise in collective trust.”. But because the La Machine performance fell within the sphere of sesquicentennial programming, its success has to be weighed within larger commemorative, celebratory, and critical projects. I think that we are obliged to consider its possible meanings and messages.

Tales of two cities?
Ottawa wasn’t the only city to be visited by mythical creatures this summer. Royal de Luxe, also a French street theatre company, brought some of their giants to join in the celebrations of Montréal’s 375th. The 9-metre tall Little Girl Giant and her dog Xolo arrived in Montréal on May 19th in order to meet up with her uncle, the 15-metre tall Deep Sea Diver. The giant marionettes traipsed through the streets, accompanied by a crew of human minders called the Lilliputians, for three days. They reunited on the 21st and then departed from the city. 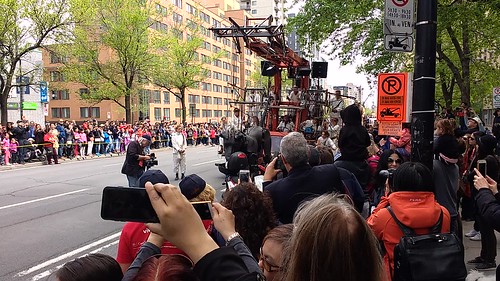 Two urban spectacles. Both of epic or mythic proportions. Alike and yet not alike. Both performances drew enormous crowds: official estimates put Ottawa’s count at 750000 and Montréal’s at 622000. But the ways in which these crowds took-in the spectacle varied considerably. In Ottawa much of the spectator experience came from attending one of the staged scenes at fixed notable landmarks. In Montréal, the spectators positioned themselves along one of the well-publicized routes. The ways in which the performances engaged the audiences underpins the main differences in the conceptual content of the pieces: form/use of space is inseparable from content/narrative.

While promotional material for La Machine described the performance as an “invasion” of the city by these creatures, the title of the Royal de Luxe piece was “The Great Invitation”. The difference between “invasion” and “invitation” signaled two different interactive forms between the visitors and the public where “invitation” implies an implicit involvement of the city and its citizens.

In Ottawa, Long Ma and Kumo waged their perpetual war among us. In Montréal, the Little Girl Giant, enormous dog, and Deep Sea Diver shared their daily tasks with us: they woke up, cleaned up, got dressed, rode scooters, ate lollipops, and meandered through spaces of everyday city life. In Montréal we saw the quotidian made extraordinary, and in Ottawa, we saw something otherworldly brought down to earth. While both are epic narratives, on the one hand we see the epic battle and on the other we see the epic quest.

But it might also be symptomatic of a somewhat unhelpful binary that is often associated with Ottawa: though Montréal has its urban tensions and divisions, town/crown is not one of them. Branding for Canada 150 includes Ottawa 2017: “be here for Canada’s big year” is among the main slogans used in promotional material. While the Giants were free to discover local spaces, the horse-dragon and the spider were confined to the familiar and ceremonial axes that are always co-opted for the production of national narratives.

Moveable myth-making?
One thing that both performances have in common is that they were produced, tried, and tested elsewhere. In both instances, spectators were invited to engage with public space in general, though perhaps not with the particularities of the host cities.

The giants of Royal de Luxe search for and find one another throughout the world. The pretence is the invitation from the host and the willingness of the characters (and company) to accept. The performance participates in the life of the host city even if it does not directly engage with it. In Ottawa, the La Machine performance worked in a different way: a prefabricated production originally designed in 2014 to commemorate the fiftieth anniversary of Franco-Chinese relations, was grafted to a local context.

This grafting felt somewhat superficial – more a post-facto justification than a transparent outlining of the terms. There was nothing overtly national or local about the performance save a backstory as outlined on the Ottawa 2017 website. In this story, Long Ma “sets out on the route taken by Champlain several centuries earlier” to recover his wings and his temple – both stolen by Kumo. The giant spider, who had been hiding under Ottawa, “the mother-city of all spiders” (likely a justifiable nod to Louise Bourgeois’s sculpture Maman), is roused during work on the new transit line.

How does this imported presentation resonate in the political and cultural context of 2017 Ottawa? Why the need for a mythical guardian and its chaotic counterpart? Why the emphasis on staging battles? What does evoking Champlain and walking a horse-dragon near Chaudière Falls signal? Who does the horse-dragon represent? What about the spider?

These questions are important because in spite of the majesty of the project, no traveling performance can ever entirely transcend its national and local contexts. The performance occurred at the heart of a summer of national myth-making which, in some ways, causes it to be subsumed: this imported allegory becomes both a transplanted foundation story and a collective memory.  People were willing to engage with monsters in the street but how would they have felt if forced to confront the monsters of Canada 150?

Because I have seen and been stirred by giants meeting in the street before. When I moved to Berlin in the spring of 2009, plans for commemorating the 20th anniversary of the fall of the Berlin Wall were well underway. Royal de Luxe’s October performance was called “The Berlin Appointment” and it was a thinly-veiled figuration of a city or world divided and a family trying to reunite. When I caught up with the Giants, they were preparing to leave town. In the fields outside the Reichstag building, a potent, nuanced, and complex cipher of German history, I ran in to a friend who was cradling her new-born premature baby in a sling. We watched as the Giants made their way to the water releasing letters that had not been delivered during the time of the division back into the city. And as I stood with Berlin’s biggest and smallest living things, I reflected on the scale and impact of my being in that place at that time. 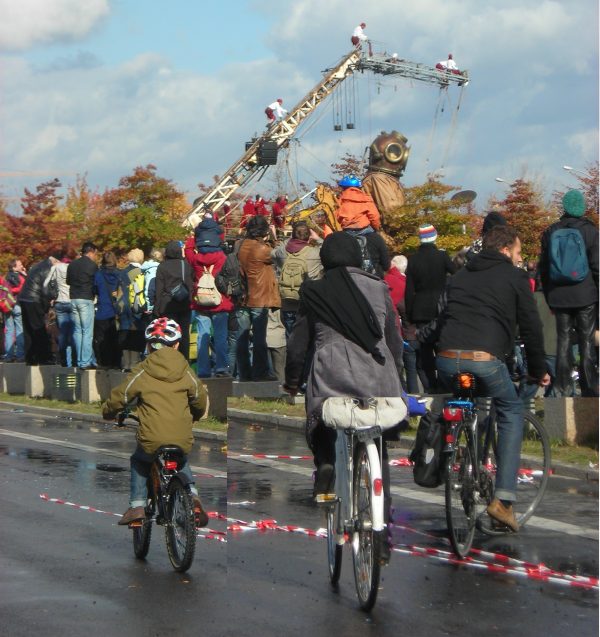