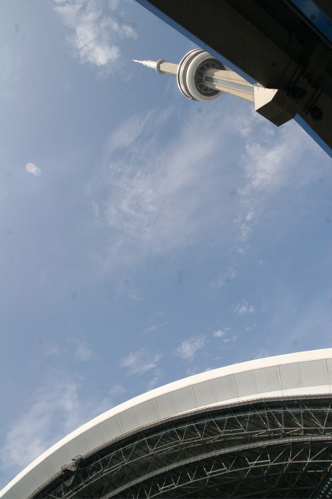 When I close my eyes I see red and white streetcars streaking past: eight years and forty-nine weeks ago I moved to Toronto with not much more than the notion that it might be a good idea. I had visited a handful of times (concerts at the Opera House, a romantic weekend or two away on the Scarborough motel strip) but hadn’t lived there, nor even lived in Kit-Kat sign-filled Canada before.

In 1998 Toronto was a different place and in many ways I see it with the same clear eyes now that I did then. It deepens my fondness for the city to not be as immersed in it, and it also gives me enough remove to compare it to the city I arrived in. Those two Torontos are very different.

I remember a Toronto where there was nowhere to live. I looked at maybe fifty apartments that October and November. Fifty! Most were highly competed for (by people without pets and with actual jobs) and many were dodgy. A weird apartment on Roncesvalles with a shared bathroom. A pet-filled dump over top of a Bloor West KFC (advertised as over a bridal shop). A Parkdale apartment painted entirely bright orange shown to me by a drunk landlord who derided the current tenant. A Summerhill apartment shown to me by a drunk landlord who drove to the showing up a steep hill. A basement on Ferrier, mispronounced. An apartment in the beach which came with a lecture on responsibility. To this day I can’t go more than a couple of miles in the city without going past some sketchy apartment in which I might’ve led another life.

I remember a Toronto full of old-school weirdness: squeegee kids under every overpass. Record stores with Jesus sayings stamped onto all the inner sleeves. JJ Muggs before it was JJ Albanys before it was an Israeli-run espresso parlour. I remember thinking eating at Golden Griddle was fun. I remember when each TTC stop had a phone number on it — you could call it and it would, in theory, tell you when the next, say, 505 streetcar would be barreling towards you in the dead cold of winter. Of course it wouldn’t be accurate, but it gave you something to do in that Bell payphone box. I arrived a few months before a record blizzard in 1999, me and my boxes of stuff just slightly in advance of the National Guard and their melting machines. I would take streetcars home that winter, or try to, and not understand when they short-turned and wouldn’t take us all the way. Living at Roncesvalles and Dundas I would later understand this was completely normal, like the driver parking at Coffee Time and making you wait for his snack, or shift change.

I remember a city pre-crazy-adorable gentrification, where a parking space on empty Dundas outside of Saving Grace cost only $1.00 an hour, and you weren’t parking behind a BMW sport utility vehicle. 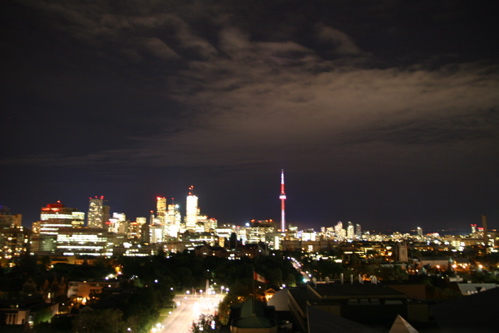 And most of all I remember a Toronto that hated itself. Arriving in Canada from the US, I was met with such a strange blast of low civic self-esteem mixed with ardent Canadian nationalism. “I’d never live in the US!” everyone would say, while out of the other corner of their mouth acting baffled that I’d moved from there to Toronto to begin with. Then they’d pause and admit — “I mean. Unless I could live in New York City.”

And though I do now live in New York, it’s not because I figured out that that city is better than Toronto, but that now that Toronto has figured out it is just as good, it seems somehow more okay to leave for my own reasons. In the years between my arrival and departure, the city has transformed, bloomed — I have said it again and again and I will say it here — due in large part to the kind of people who would be reading this blog in the first place. Street furniture activists. Zealous gardeners. Transit nerds. Kids with bubble guns. People who close streets to cars. Wanderers and photographers and romancers of the city at and above and below street level — those who look up and around when they are traversing blocks, rather than dully forward. People who engage and take ownership. They have found a city to love and in response it has thrived. Some of these goofballs even go drinking with the mayor. Toronto. What a beautiful place. 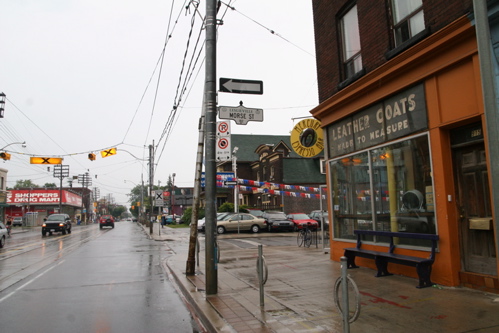 On my second night in New York City this wekeend, watching Final Fantasy perform songs about Brad Lamb and the CN Tower here on the Lower East Side, I was so proud and homesick in the same breath. I knew I was in on something most of the audience wasn’t — the experience of living in one of the most charming and usable cities in North America, one whose romance is just building and one where the DIY attitude has merged with notions of civic responsibility and the creation of common space. I will passionately miss the city that strung a utility pole on Harbord like a bass guitar, and where every outdoor patio is filled to capacity the first day of late winter that surpasses 11 degrees. Where houses teeter and tip into Shaw Street, where you can have a campfire on an almost private island overlooking the glittering lights of downtown, where you can walk home from anywhere at all and feel more or less completely safe, see stars between the sodium lights, and pulse with Toronto’s wonder and potential. 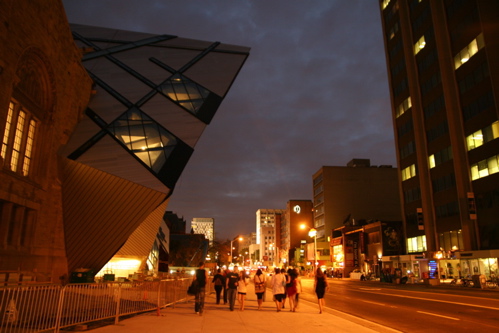 Though it seemed to me like my time in Toronto would go on forever, it amazingly didn’t, like the endless construction at the ROM (once that crystal was built, it almost felt like I was allowed to leave). As I drove away from the city (Friday night, tons of traffic, of course, yes, and why?) the Gardiner sparkled and menaced, more ads than ever on the side of the highway, more big box awfulness stretched far into Burlington. But as I wound my way along the Burlington Skyway, the Garden City Skyway, up into the lamps and ramps towards the Empire State and back to USA — it felt so much like the days I was just dawning on Toronto. I am so glad it has learned to love itself and is in such good hands as yours, ours. I promise to be its ambassador if you all promise to keep up the good work. Do not squander what you have: I have seen the rust belt and too much has been wasted. We are all lucky for Toronto’s existence — now take that city and run with it.