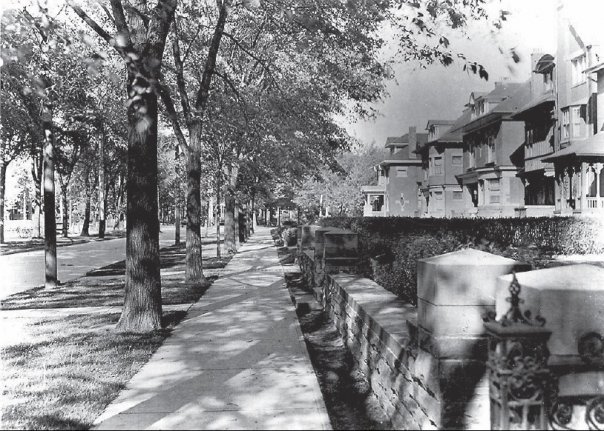 As Shawn Micallef wrote earlier this month, Jarvis Street has been much abused over the years. It was once one of Toronto’s most elegant streets, lined with trees and handsome mansions on both sides of a narrow road. But over time the trees were cut down and the street widened. Still home to some majestic historic mansions as well as interesting modern buildings and the western border of Allan Gardens, and a street where thousands of people live, work and go to school each day, the street is currently little more than a wide, dull transportation corridor through the heart of one of the oldest parts of the city. It is utterly dominated by five lanes of car traffic — the middle one switching directions with the rush hour — devoted to moving cars through the space as rapidly as possible. Both pedestrians and cyclists avoid using it unless they have to.

There has been some discussion in the media recently about how the City of Toronto has come up with a plan to change the situation. At the May 5 meeting of the Public Works and Infrastructure Committee, city staff will present a plan to remove one lane of traffic on Jarvis between Queen and Bloor and narrow the roadway. The plan is to divide the 3 meters of this lane between pedestrians and cyclists — 1.2 meters to widen the narrow curb lanes to make them safer for cyclists, and about 1.8 meters to create a sidewalk boulevard on the eastern side to allow the planting of a row of trees along most of the street, and other enhancements to the public realm, that will restore some of the street’s former elegance.

The plan to remove a lane of traffic has provoked predictable anger from drivers who don’t want to have to spend an extra two minutes to drive from their jobs in the financial district to their homes in Rosedale and North Toronto. But in stories in the Star and the Globe and Mail, local councillor Kyle Rae, one of the prime movers of the project, stood up to this opposition and spoke out in favour of taking out the lane and improving the street.

But here’s the curious thing: at the final public consultation meeting for this project on January 22, 2009, Rae announced that he was not actually supporting the plan City staff will be presenting for Jarvis Street. He said that he is instead supporting a last-minute alternative proposal — one that would not in fact narrow the roadway or create a widened sidewalk boulevard, would not enable the planting of new trees, and would allow for few of the proposed enhancements to the pedestrian realm.

The goal of this alternative proposal is to put full painted bike lanes on Jarvis between Queen and Bloor (not just widened curb lanes). The problem is that bike lanes would take 1.5 meters on each side of the street, meaning they would take up all of the 3 meters of space made available by removing a lane of traffic, leaving no space for the plan to create a boulevard in which to plant trees and make Jarvis more attractive and more pedestrian-friendly.

Bike lanes are, of course, desirable on all streets with heavy traffic.  But the case for giving full bike lanes such exclusive priority over this limited space on Jarvis is relatively weak. Bike lanes on Jarvis would serve a fairly small number of cyclists. Most cyclists whose journey includes an east-west portion could take the existing Sherbourne bike lane, only 2-3 blocks away. Furthermore, Jarvis would not be a integral addition to any bike lane network. Going from Queen to Bloor, it would not really connect other lanes — unlike the Sherbourne lanes, which connect the waterfront trails all the way to the lane to the Bloor Street Viaduct, and to routes connecting through Rosedale. Parallel lanes on Jarvis and Sherbourne would be closer together than any other bike lanes in Toronto, and given Jarvis’ heavy traffic and its dangerous intersection with Mount Pleasant, most cyclists are likely to choose Sherbourne anyway (at least if the terrible paving gets fixed).

But the more important issue is that the revitalization of Jarvis Street wasn’t really about transportation at all. On the contrary, it was about moving away from Jarvis Street as a transportation corridor and giving it a real sense of place – a place to be rather than a place to travel through. Jarvis is home to many residential buildings, several large office buildings, and several important educational institutions, yet the thousands of people who live, work, and study there currently spend as little time as possible on the street, and probably don’t even enjoy looking out their windows at it. Jarvis is also home to many historical buildings and to the historical Allan Gardens, yet no-one particularly wants to spend time on the street appreciating them. The goal of the revitalization was to make Jarvis once again a destination, not a thoroughfare — a place people might actually want to spend time, thanks to a wide, tree-lined boulevard. Bike lanes would make the street a little less unpleasant, mostly by slowing traffic and buffering it a bit, but it would still remain an unpleasant transportation corridor.

The question of a champion

So how did this curious situation come about? I suspect a key issue in the Jarvis situation is the lack of a champion for the City’s plan for a tree-lined sidewalk boulevard. The buzz at the public meeting in January was that the original impetus for the plan to make Jarvis an appealing street came from Ted Rogers, whose corporate headquarters sit at the street’s northern end, and who died just as the process was getting under way. Whatever the original impetus, there is no group who has stepped up to champion the plan — no local resident’s association, no BIA (Business Improvement Association) — in part for the very reason that no-one really identifies with this neglected street. By contrast, cyclists in Toronto have become increasingly well-organized and vocal, and were able to mount a strong lobbying campaign for bike lanes.

A related issue may well be that bike lanes are simply cheaper.  Another curious aspect of the Jarvis plan is that, unlike most other street-narrowing projects this decade (e.g. Lansdowne, College St. between Spadina and Bathurst, or Roncesvalles), the Jarvis plan is not part of a scheduled and necessary road rebuilding program, in which a lot of the expenses of tearing up the road would be incurred anyway and narrowing the roadway can be done efficiently. The out-of-cycle nature of the plan is another indication that it may have originally been inspired by the prospect of private support. Without the prospect of private contributions to the project, repainting the street is a lot cheaper than rebuilding a portion of the sidewalk and road.

It’s interesting to contrast this situation with a comparable plan in Rae’s ward, the now-underway project to widen and beautify sidewalks on Bloor St. between Avenue Road and Church. This stretch of road would in fact be a strong candidate for bike lanes — there is heavy bike traffic already, there is a real need for a good east-west bike corridor, and with a slight expansion it would link together several heavily used parts of the bike network (Bloor Viaduct, Sherbourne, St. George). As well, the pedestrian realm in this stretch is already wide, attractive, and heavily used. But the Bloor sidewalk-widening project has a strong and interested champion and funder, the wealthy and powerful Bloor-Yorkville BIA, who want to create a sense of place to enhance the shopping experience for their walking customers. Because they were providing the money, they were able to govern the direction of the project.

Right from the beginning of the consultation process, there was a strong demand for the city to provide bike lanes on Jarvis. It is, surely, the whole point of public consultation that the City take into account what it hears from the public.

There are two ways the City should have responded to this demand. First, among the options included in the early part of the EA process was the possibility of taking out two lanes of Jarvis Street, leaving the centre lane to shift direction according to demand as it currently does. That would have kept exactly the same rush-hour-direction capacity on Jarvis as the 4-lane plan that is being recommended — but it would also have allowed both widened sidewalks with trees, and also full bike lanes. But it was clear from the beginning of the process that this option was pro forma only and was not being looked at seriously. Yet this option should have been one of the leading contenders in response to the public consultations and the demand for bike lanes. Instead, it was dropped in the final document (PDF) and to make way for the bike lane-only option (while the pointless option of creating a median was kept).

The other way the city should have responded would have been to immediately design and introduce an option with bike lanes instead of sidewalk widening at the beginning of the EA process. That way this option could have been evaluated by the engineers, the designers, and the public on equal terms with the other options. Instead, it was denied as a possibility for most of the process, and then inserted right at the end, seemingly when it received political support.

It’s unclear how this will all play out at Works Committee and City Council, although generally council is deferential to the local councillor in these matters. It could also be that, whatever the decision, the project will be shelved for a while for lack of funds.