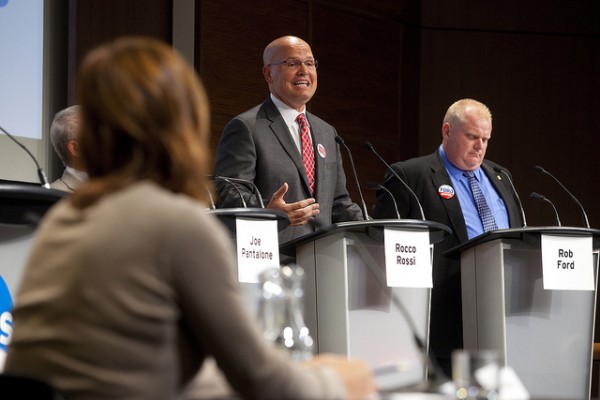 • Now that it’s post-Labour Day and Torontonians are back from cottage country, the real race can begin. And last night, dare I say it, it did. The first debate of the three-part series, Toronto Debates 2010, went smoothly last night with the candidates chopping up Toronto’s economic future. With little bickering, only a couple of barbs thrown (mainly from Smitherman and Ford) and an actual consensus between the five frontrunners, maybe we’ve hit a turning point. At least for the way the candidates approach debates anyway.

• Rob Ford released that long-anticipated transit platform of his. And he did so via YouTube, of course. A place he’s been having a lot of fun with in the past. But this time wasn’t the jocular, it was, er, serious, I guess. Ford announced, mainly by reading off his notes at a slow pace, that his $4 billion transportation plan is sensible and smart. By cutting back on streetcars and adding subways, Ford noted that this won’t bring on the gravy train. Meaning no extra taxes or road tolls. He plans to (somehow) reallocate the Transit City funding from the province and put it toward his plan — as if he could do that. He also noted that he would ambiguously and without any hard action, acquire $1 billion in private funding. As if that’s an easy task as well.

• John Lorinc takes aim at Rocco Rossi’s new election strategy. In the wake of Rossi’s being in favour of councillor term limits, Lorinc takes a look at Rossi’s supporters, including lobbyists, spin doctors, the recently embattled Hazel McCallion et al. What it all adds up to, Lorinc points out, is not so much a strategy but an interesting, somewhat shady entourage and voting habits.