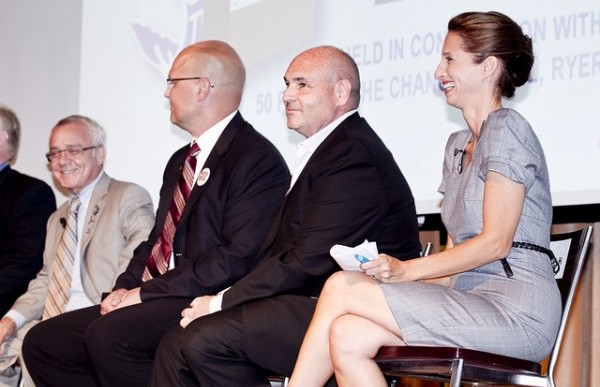 • The Ford-as-mayor reality is starting to take effect. After two polls came in showing Ford pulling far ahead — Nanos poll has Ford at 45.8%, Angus-Reid poll reads: 39% — the media is taking note, mainly through unflattering editorials and columns. But to what point did the media get Ford to his way-far-in-the-lead position? Spacing’s Nabeel Ahmed takes a look at Ford’s relation with the media from his uneventful beginnings through the pot charges, soccer coach days and poor-quality YouTube videos to today.

• And time again for another CP24 debate. Unlike the last couple progressive, and dare I say useful debates, this one returned to the classic argumentative clashing. With the trailing candidates also taking note of the polls, they each took shots at Ford, his campaign promises and past indiscretions. And through the yelling, there was some sobering comedy in the fact that there is still a huge number of undecided voters still looming. A whopping 25% are still on the fringe. Then again, only 41% of the electorate came out for the last municipal election in 2006.

• John Lorinc looks at a little bit of reoccurring election history. Going back to the 2003 race, Lorinc ties together the similarities between the outgoing mayor and the current frontrunner. One way to stop Ford’s non-gravy train, Lorinc opines, is for one of the candidates to call it quits. This possibly being Joe Pantalone. In Pantalone’s defence, Andrea Addario, David Miller’s communications director in the 2003 mayoral campaign, makes a case for why Pantalone needs to stay — and continue to gain steam.

And in bite-sized election-related news:

• Sarah Thomson is considering bowing out in an attempt to stop Ford. She’s still considering who she would back if she does take the step. She is also denying this step in other media reports.

• Once-mayoral hopeful, George Mammoliti, has thrown his support behind the Ford train. Although not so friendly in the past — the term “gino-boy” was allegedly tossed by Ford — Mammoliti, who’s seeking re-election as a councillor, has hope for Ford.