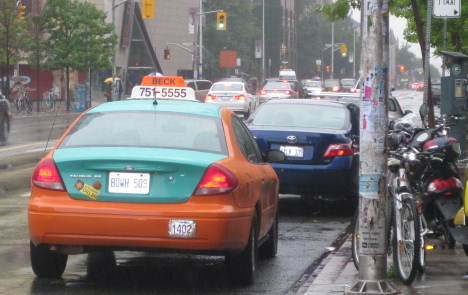 My first, and only, experience in one of Toronto’s hybrid taxis was a couple of months ago. I have since been bewildered by the lack of hybrid taxis on the road. There are roughly 40 hybrid taxis in the city, representing less than one percent of Toronto’s 5700 cabs. This is one of the lowest ratios of hybrid taxis in any major Canadian city. Toronto has fallen behind cities like Vancouver, who boasts over 100 hybrid cabs and a policy that all new taxis be hybrid. Toronto has also fallen behind its own 2007 clean air action plan goal of shifting all taxis to low emission or hybrid technologies by 2015.

A 2009 study published by the Toronto Atmospheric Fund, TAF, reported Toronto’s taxi fleet CO2 emissions could be cut by 25 percent, up to 19,000 tonnes per year, if all cabs went hybrid. The study compared conventional gas-powered Toyota Camry taxis with hybrid Camry taxis, collecting 750,000 km of fuel consumption data over 18 months, and found that drivers could save roughly a thousand dollars over the seven-year allowable taxi lifespan. While the savings are modest, the emission reduction benefit is substantial. Hybrid taxis emit an average of three tonnes less CO2 per year than conventional cabs.

Ownership structure is the primary reason hybrids have been slow to gain popularity. Two-thirds of cabs in Toronto are owned by one party and leased to a driver. This separation between owner and driver creates a split incentive. Taxi owners do not benefit from purchasing costly hybrids; it’s the drivers paying for fuel who see the gains. The remaining third of Toronto’s taxis are owner-operator. This structure enables drivers, who are also the owners, to realize a return on purchasing a hybrid. All the taxis in the TAF study were owner-operator. 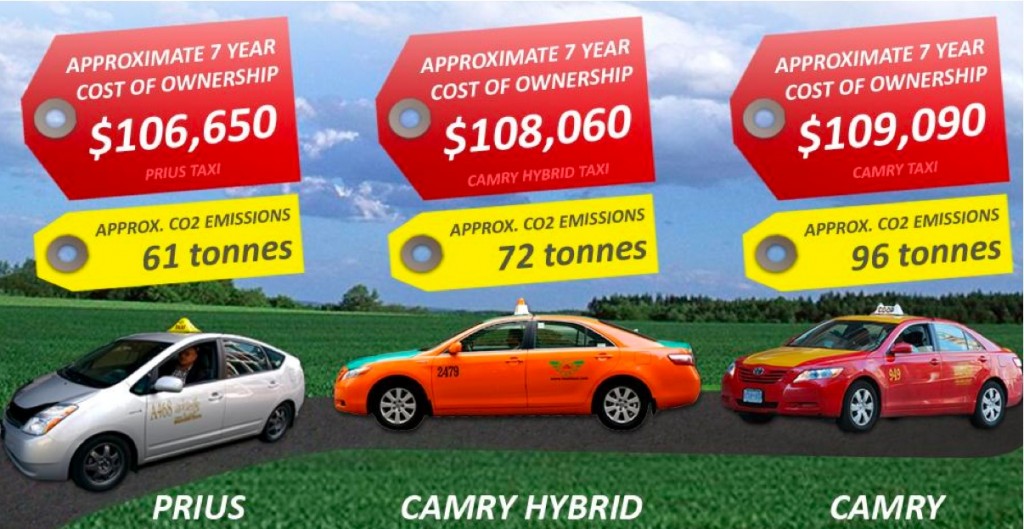 Used vehicles for taxi use, allowed by the municipal code, create a further disincentive for both ownership models to opt for hybrids. Conventional gas-powered used vehicles, mostly year-old fleet vehicles, are available at a fraction of the price of hybrids. Drivers are also wary of hybrid battery technology. Replacement hybrid batteries can run in the range of 4000 dollars. And while there has yet to be a battery problem in any of Toronto’s hybrid cabs, drivers see potential battery replacement as a large financial risk.

The municipality, who dictates vehicle requirements, has been slow to encourage the transition to hybrids. While the city has raised fares to help drivers cover fuel costs, there has been little in the way of incentives to switch to hybrid technology. Mayoral candidate Sarah Thomson has proposed a one-time rebate of 500 dollars on licence fees for each taxi willing to switch to hybrid. However, the rebate will likely not be enough of a financial incentive to encourage taxi owners to make the switch. A change in licence structure, requiring all vehicles be owner-operator, or a bylaw requiring mandatory low emission or hybrid vehicles, would speed up the transition.

Local governments in the U.S. have been pushing to enact regulations for low emission and hybrid taxis for some years now. Despite initial resistance from taxi driver associations, there is now a bill before congress known as the Green Taxi Act, which would allow cities to enable such changes. For Toronto, a city that prides itself on its environmental initiatives, enacting a policy change that would encourage a hybrid taxi fleet is long overdue.

Do you think the city should change the municipal code to encourage hybrid vehicles? Is there a better way to create an incentive for taxi owners to make the switch?