In the wake of city council’s decision to continue to build-out Toronto’s LRT plans — and since Mayor Rob Ford continues to mistakenly call any LRT project a streetcar line — Spacing will profile a handful of LRT projects from around the world that will give readers a  little better understanding of this transit option.

Consider an auto-obsessed city – a place where people love their cars as much as they hate the traffic –  embarking on the biggest expansion of its mass transit system in decades, an effort to change the way people navigate its sprawling and clogged streets and freeways.

That’s the reality in Los Angeles, where, since 1990, the city has witnessed a renaissance in public transit, with the inauguration of four rapid light rail transit lines, one underground metro route, and a heritage waterfront tram.

Starting from scratch just over two decades ago, LA wound up with over 60 miles of track,  53 LRT stations, and 172 LRV train cars, in addition to 16 miles of subway –  an over $6 billion investment.

As Spacing’s John Lorinc pointed out a few weeks ago, LA’s conversion to light rail offers a transit lesson for Toronto. 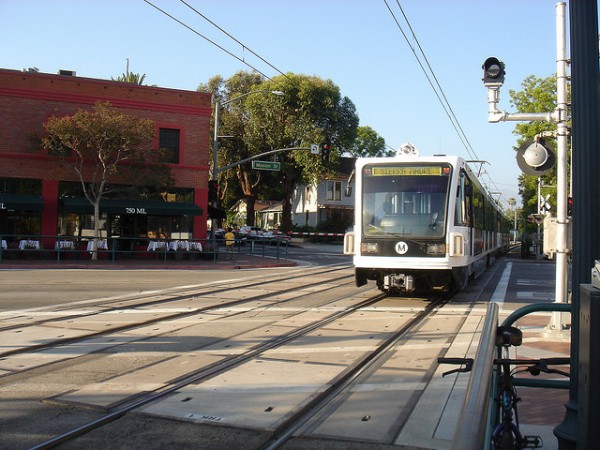 Los Angeles County’s Metro Rail LRT routes run in a mix of environments, including on city streets, segregated from neighbouring roads, and in the median of freeways. Whether at-grade street, at-grade ROW, elevated, and underground, all trains are governed by colour light signals.

On average, service operates every 5-10 minutes during the peak period and 10-15 minutes on weekends, reaching top speeds of 65 mph and traversing over a dozen municipalities from Los Angeles to Long Beach, Compton to Culver City.  Each line runs approximately 30 to 60 minutes end-to-end.

Transit revenue is provided in part by two half cent sales taxes that contribute over a billion dollars, while State and Federal grants combined account for a billion. Other resources include bonds and fare box revenue.

Long term sustainable funding has permitted countless rail extensions and additional routes, the most recent of which, LA Metro’s Expo Line, is near completion, currently being test-driven.

Interurban rail is one of the most viable ways to connect suburban and exurban parcels to city centres. It is equitable, affordable, and flexible. With similar problems of gridlock and sprawl, significant regional competition, and income diversity, Toronto could find inspiration in Los Angeles’s transit successes.