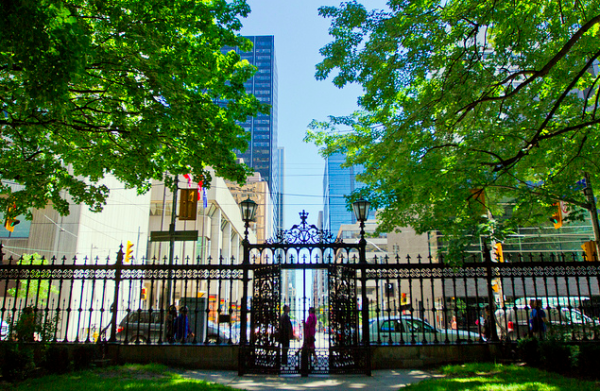 Editor’s note: Spacing was invited by the Law Society of Upper Canada to tour Osgoode Hall and its new exhibit, “Fact or Fiction: Deciphering the Fence at Osgoode Hall”. The Law Society will be running free public tours of the building throughout the summer, weekdays at 1:15pm. Visit their website for more information.

Bordered by Queen Street West and University Avenue, in the heart of downtown Toronto and steps from the glassy towers of the financial district, lies one of the city’s most magnificent historic gems: Osgoode Hall. You may have passed by on the 501 streetcar or popped out of the subway station near its cast iron fence, but few venture beyond the gates.

Behind the monumental fence lie Osgoode Hall’s meticulously maintained grounds, filled with lush grasses, a mature tree canopy, and bright summer blooms. As I arrive, a small dog plays in the grass, families stroll along the footpaths, tourists consult pull out maps, and suited men and women lunch on shady benches. Tall trees and thick vegetation provide respite from the traffic along University Avenue, while the Shangri-La tower peeks out above the treetops to remind me of my urban context.

Osgoode Hall, named for William Osgoode, the first Chief Justice of the province, is one of the oldest remaining buildings in all of Toronto. Built in 1832 to house the Law Society of Upper Canada, it has served as a center for legal life ever since. The Law Society of Canada remains a part-owner of Osgoode Hall and still serves as a governing body for Ontario’s legal professions.

The building is fully functioning, home to the Law Society’s offices and courtrooms for the Court of Appeal and Divisional Court. It is remarkable that, given its functionality, the building is still maintained according to strict historic standards and employs a full-time curator, Elise Brunet, to manage the facilities, historic features, portrait collection, and to run educational tours and exhibits of the building.

Constructed in various waves of additions, dating from the original 1832 structure to the most recent 1991 renovation, the building layout is “amazingly confusing, like the legal system,” joked Brunet. The structure itself contains remnants of many different time periods and purposes. Its mixed architecture is reflective of various social perceptions of justice, from grand and imposing to understated and functional, demonstrating a strong correlation between aesthetics and purpose. 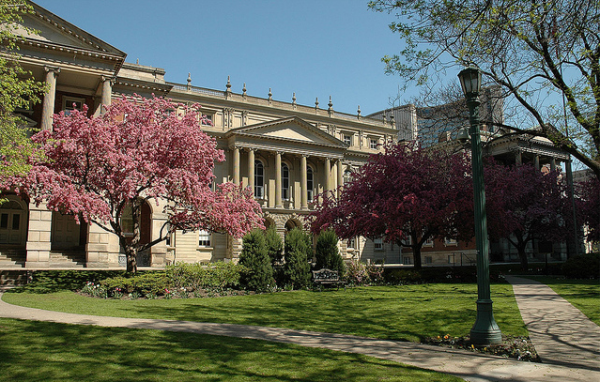 The exterior of the building, as well as the various rooms within, is absolutely stunning. The breathtaking American room, a wing of the Great Library, was a personal favourite. With it’s old world wood paneling, spiral staircase, and original stained glass skylight, this two-tiered library space is a sight to behold.

Brunet said that, because of its stunning design, Osgoode Hall was considered “The CN Tower of the 19th Century”; all important dignitaries and visitors to Toronto paid a visit to Osgoode. Evidence can be found in a collection of artifacts including guidebooks, souvenir dishes, postcards, and stereoscopic cards that demonstrates Osgoode Hall’s position of importance in the minds of 19th Century Torontonians.

After touring the main atrium, a functioning courtroom, the Great Library, the Reception Room, and Convocation Hall, Brunet guided us to  the newest exhibit by the Law Society titled “Fact or Fiction: Deciphering the Fence at Osgoode Hall”. The exhibit is focused on the iconic 1867 cast iron fence surrounding the property. It dispels major myths about the fence and, in particular, the pervasive assumption that the fence was built to keep cows out of the Osgoode grounds. The exhibit investigates the origin of the cow theory, most likely made popular by Patrick Slater’s 1933 novel “The Yellow Briar”. Panels counter this perception of 19th Century Toronto as rural and bucolic, chronicling the fence’s history of design and construction and it’s context within the surrounding area, which was completely urbanized at the time of the fence’s construction. 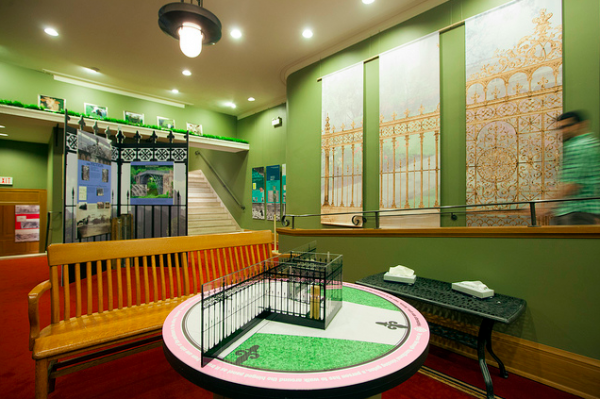 Additional panels in the exhibit explore the different social meanings of fences, from aesthetic enhancement to spiteful barricade. The Osgoode Hall Fence itself is lauded for its ability to define space, create a barrier between the grounds and the street traffic, and afford a sense of scale to the grand historic building. 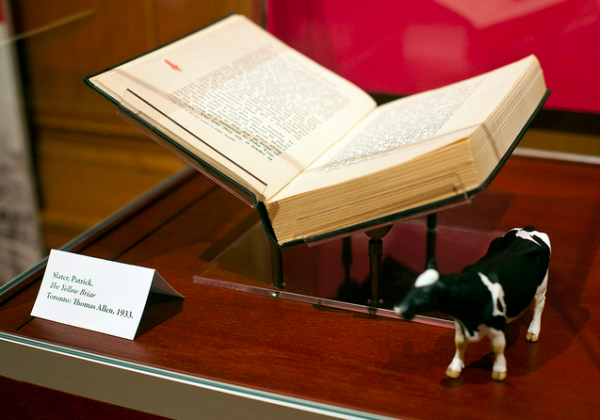 Upon exploring Osgoode Hall and the exhibit, it became clear that the structure itself is deeply connected to the evolution of the city. The phases of restoration, the multiple additions, and its changing functions reveal that this building is certainly not a museum. Things keep moving forward at Osgoode; it is not a static space.