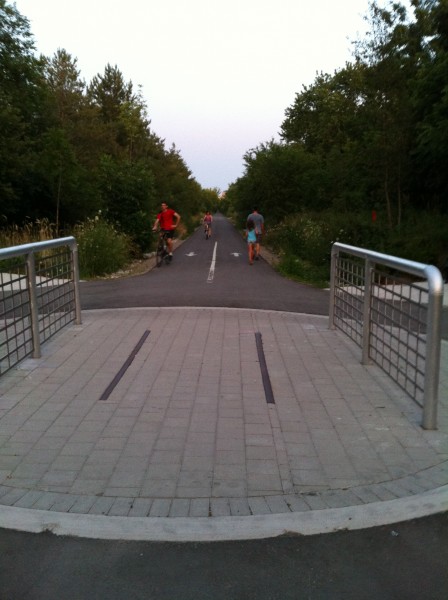 When it comes to transportation planning, networks get a lot of credit. This is particularly true in grid cities like Toronto, which transportation scholar Paul Mees has written at length about as the poster-child for the power of transportation networks (Spacing Vancouver reviewed his most recent book Transport for Suburbia). Having been particularly inspired by Mees and others, I’m always on the lookout for unobserved transfer points, missing links and connections that expand my access to Toronto. Nowhere is this more fun to do than with the bikeway network.

In an era better known for vanishing bike lanes, little coverage has been given to the expansive off-street cycling trails being built in Toronto’s inner suburbs. In 2011 alone, 25km of off-street trails were built (meanwhile on-street lanes experienced a 3.2km net loss). While that hasn’t made my daily ride to work near Union Station any easier, it did get me to take my bike on a GO train after work last week. For blazing new trails on smoothly paved and car-free paths, Toronto’s inner suburbs, not its downtown, is where it’s at.

With a 2012 Bike Map as my guide, I set off from Old Cummer Station in North York with the idea to link several off-street ravine paths with the new CN Leaside trail built between York Mills and Eglinton (see my route here). Running on an old freight corridor, the new trail mixes Davisville’s Beltline feel with little design touches drawn from New York’s High Line Park and the West Toronto Rail Path. Beautifully paved with new bicycle traffic signals (Toronto’s first?) and parts of the old track preserved at intersections where benches and artful bike parking rings sit, the CN Leaside trail is well worth checking out.

That is, if you can find it.

Coming from the well-used Betty Sutherland trail to the north, I couldn’t find a single sign to direct me towards the CN trail’s obscure starting point at the bottom of an industrial park southeast of York Mills and Leslie. This was despite following a recommended route on the City’s bike map. Nor were there any signs along the trail pointing out the many nearby off-street paths — in Edwards Gardens and Wilket Creek  — I could connect to. Worst of all, there was no mention that the path’s southern terminus was a dead end a full kilometer after the last chance to exit. 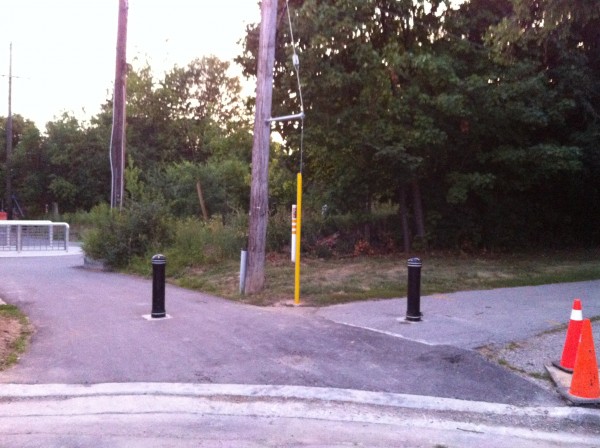 The CN Leaside Bike Trail in need of some signs

Having lived in New York and recently visited Washington D.C., what is most striking about their bicycle infrastructure is the way-finding — a.k.a. the signage and route design — that ensures you get from A to B. With bike lanes just as challenging to build there as in Toronto, these cities have been peppering their streets with signs directing cyclists to major landmarks from miles away. As a result, no map is needed to find a safe route from Midtown Manhattan to Prospect Park, Brooklyn — an 18 kilometre trip — even if you’re new to the city.

In these places, the few bike lanes that do exist become the trunk lines fed with riders through well-signed streets. This is not unlike how a limited number of subway lines are fed by a network of streetcar and bus routes, or how cars are funneled off local streets and onto arterials and highways. It’s the way-finding infrastructure, an easily implemented, cheap and uncontroversial tool, that makes these still limited bicycle networks function well.

Toronto’s ravine and rail paths hold huge potential to be those trunk lines, but only if they are linked, visible and easy to use. Despite winding through all four corners of the city, these off-road, car-free trails remain literally below the radar of much of Torontonians despite their potential usefulness.

This doesn’t mean they can act as a permanent surrogate for more direct on-street lanes. Yet with off-road trail expansion moving full-speed ahead, these new and existing paths need to be integrated with the larger system rather than being treated as piecemeal projects mostly for the benefit of a local community.

After all, few cities can claim to have 286km of already built off-street trails. It’s time they were put to better use.