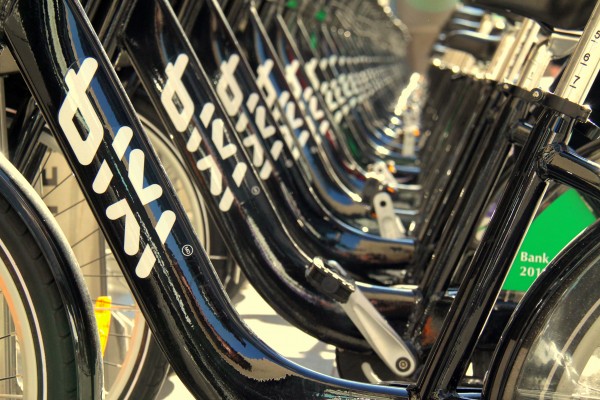 Last week, Tyler Hamilton wrote a good column in the Toronto Star on the rise of car-sharing companies in Toronto. Entitled “Not owning a car in T.O. has never been easier,” Hamilton described how there are now three car-share companies in Toronto — ZipCar, AutoShare and Car2Go — that together have over 1000 vehicles at 550 locations around the city. To put this in perspective, that’s more shared cars than Bixi bikes and almost seven times more car-share locations than Bixi stations.

For an extra $45 over the cost of an annual membership in any of the three companies, Hamilton points out that members can get access to vehicles from all three companies. This includes the new pay-as-you-drive Car2Go vehicles, a fleet of 250 Smart Fortwo cars that can be picked up and dropped off in any City-owned Green P parking lot south of Eglinton between Jane and Victoria Park, don’t require advanced booking and can be taken one-way.

Car2Go is therefore something altogether different from the previously existing car-share systems. As Hamilton writes:

Kevin McLaughlin, founder and president of AutoShare, prefers to think of Car2Go as a ‘self-driving taxi’ service and not true car-sharing. ‘By far their (Car2Go’s) biggest impact, at least at the beginning, will be on taxis, Bixi (bike sharing), walking and even transit.

The new Car2Go service, argues McLaughlin, is so convenient that its competition isn’t other car-sharing companies but public transportation systems; namely, Bixi and the TTC.

Following the simple test, “if it looks like a duck, swims like a duck, and quacks like a duck, then it probably is a duck,” a unified car-share membership that includes Car2Go, I would argue, is essentially a public transportation system.

There’s one major problem with this argument. For at least the last 90 years, all forms of public or semi-public forms of mobility in Toronto have been either licensed, franchised or owned by the City or the Province. This includes Bixi, which is technically a “municipal capital facility” with a ten-year contract to operate in Toronto, similar to how in 1891 the Toronto Railway Company was granted a 30-year franchise to operate a street railway. As far as I can tell, the car-share companies have no such municipal relationship aside from purchasing parking permits with the City.  In Paris, Autolib parallels Velib in its relationship to the government. Berlin’s electric car and bicycle network is linked to the city’s public transportation system.

This isn’t to say that the rise of private car-share companies is bad. If anything it shows that there is a latent demand for more transportation options that the existing public systems aren’t meeting which it is attempting to meet. But why was car-sharing allowed to go the private route while bicycle-sharing was implemented publicly?

As a result, car-sharing companies have been rapidly expanding while Bixi’s growth has been stymied in political gridlock.  Since ZipCar’s Toronto launch in 2006, car-share vehicles in the city have grown by at least a factor of 12 from 80 cars to over 1000 (including Car2Go). Had Bixi grown at a similar rate, today we would have had the 3000 bikes and 300 stations originally planned by City Council.

Of course, that assumes bike-share is as popular and potentially as profitable as car-sharing. This gets at the root of the double standard underpinning this tale of two systems. Bixi was approached as a traditional transit system, a public service that would require a subsidy to be successful and that the municipality would therefore have to control to guard itself against escalating costs. Car-sharing, on the other had, was seen as akin to private car rental — a benefit to be enjoyed by those who can afford it and that can be left to the market where it will succeed or fail.

In hindsight, there’s no reason why car-sharing, a service more likely to reduce car use and compete with the TTC’s public transport monopoly, wasn’t municipally subsidized or owned. In contrast, Bixi may not have needed a subsidy to succeed (New York City’s system isn’t getting one) and might have expanded faster had it not been controlled by the City. If keeping Bixi affordable was driving public involvement, a subsidy could just as easily have been given to a company to expand based on the number of riders who signed up or been targeted to help certain groups buy memberships through refunds or discounts (i.e. student passes).

The tragedy of it all is that despite the City’s best intentions, old associations are allowing almost free reign to new auto-oriented transportation systems while bicycle-based systems remain constrained. This isn’t a call to sell off Bixi or for the City to pull a 1921 on the car-sharing companies. Rather, it’s to acknowledge that a double standard is still being applied to the way bikes and cars are perceived by public policy, and this is obstructing our ability to provide public services that shouldn’t be politically polarized issues in the first place.