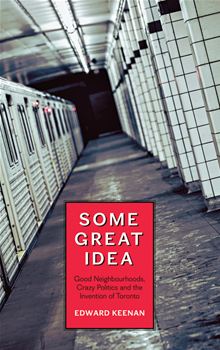 “I’m writing here about Toronto, an interesting case and a city that’s sometimes deﬁned as much by the brevity of its backstory and its hazy character traits as by its pre-eminence among Canadian urban areas or its agreeable nature. It’s a Gatsby among municipalities. And I’m writing about a time – the decade and a half following the 1998 creation of the Toronto ‘megacity’ – in which the stories Toronto tells itself, and the various subplots lived by the people in it, have refused to converge into a coherent narrative.” – Edward Keenan, Some Great Idea

You’ve probably read and appreciated Edward Keenan’s analysis of Toronto politics in The Grid. Nominated eight times for a National Magazine award, Keenan is a voice of reason, an advocate for transit, accountability, and a more thoughtful citizenry.

Tonight, Keenan launches his new book, Some Great Idea: Good Neighbourhoods, Crazy Politics, and the Invention of Toronto at Lee’s Palace (529 Bloor St. W). The evening will start off with a one-on-one discussion between Keenan and former Toronto mayor David Crombie, and DJs Track Meet will make sure it doesn’t end too soon (see full event details here).