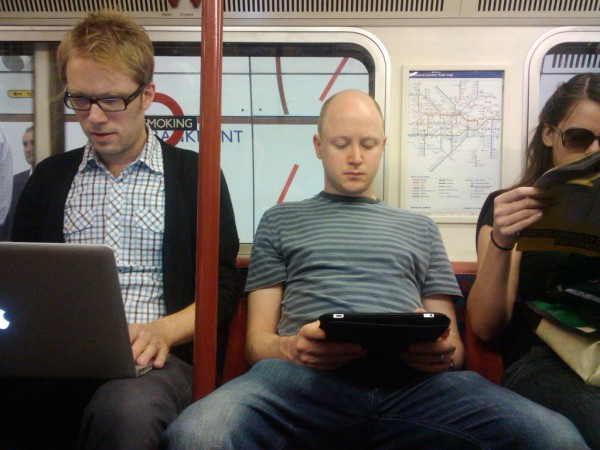 Ever wish you had something to read on the subway, other than that crumpled free commuter newspaper on the floor? Three students at the Miami Ad Schoolcame up with this idea to use ads on the New York subway that can bring a small library to your smartphone.

Responding to a revolution in the way we consume books, commuter ennui, and limited cell service on the subway, the idea is fairly straightforward. Use some of the advertising space on a train to display a number of current titles, and embed near field communication (NFC) chips behind each. When a title is swiped by a smartphone, it will send a 10-page preview of the book to your phone — just enough to kill some time and get you hooked — and let you know which library branches have a copy of the entire book. It could also include links to the library catalogue with up-to-date information on availability for when you next surface.

It’s easy to see how this idea can be adapted to Toronto, or any transit system, for that matter. There are a number of library branches a stone’s throw from subway stations — the Runnymede and Bloor-Gladstone branches are no more than a block from Runnymede and Dufferin stations, while the North York Central Library connects directly to North York Centre station. Extra copies of books featured on the subway could be stocked in nearby branches to ensure availability.

The TTC is also slowly rolling out cellular and wifi service in the subway, starting with station platforms, so new mini “e-branches” could eventually include links to complete eBooks available from the Toronto Public Library’s growing digital collection. Before iPhone users get too excited, though, Apple does not include NFC technology on its phones, so swapping NFC chips for QR codes linking to websites may improve accessibility when cell reception does make it underground.

Newfangled eBooks and wireless communications technology may be a bit much for Toronto’s typically low-tech transit system, but New York has taken a bricks-and-mortar approach and built a small 2,100-square-foot public underground library branch, tucked away just outside the turnstiles at the 51st Street station on the busy Lexington Avenue line in Midtown Manhattan. The library offers a selection of fiction and non-fiction books, and passing by a dozen times a week on the way to and from work, school or home means you’re not likely to pay overdue fines too frequently.

Is this something that could work in the subway? (Or in the métro, SkyTrain, Transitway or C-Train?) Where would you like to see new “e-branches”, or where might a new branch be squeezed in? Leave us your thoughts in the comment section below.