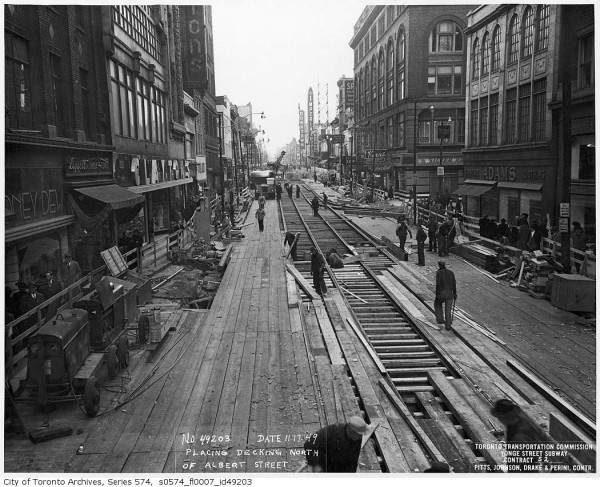 As Toronto’s surreal transit funding battle continues to spin out of control, the far-sighted, progressive-minded transit policies coming out of the Los Angeles region continues to impress.

Consider this intriguing employment deal adopted by Metro, L.A. County’s transportation planning authority, which is responsible for spending $40 billion on new lines and highway improvements over the coming three decades (thanks to a new stream of revenues from a half-cent regional sales tax approved in 2008).

In January, 2012, Metro’s board approved a project labour agreement [PDF] with the region’s building and skilled trades unions that explicitly directs jobs towards the residents of L.A.’s regrettably large collection of very poor neighbourhoods.

Under the terms of this so-called “construction careers policy,” contractors and the building trades are required to ensure that 40% of the construction jobs on projects over $2.5 million go to people living in “economically disadvantaged” areas; 10% to disadvantaged workers; and 20% to apprenticeships.

Both unionized and non-unionized contractors must comply with these targets if they want to qualify. The PLA, according to this FAQ, applies to a wide range of positions, from landscapers to steelworkers.

To ensure there’s no fuzziness in the implementation of the policy, Metro has carefully delineated the characteristics of a disadvantaged neighbourhood and even allows bidders and unions to check addresses of “target workers” on a zip-code search engine, check lists of current and forthcoming projects, and consult with officials dedicated to ensuring that the policy delivers on its ambitious promise.

The point, says Patricia Castellanos, deputy director of the Los Angeles Alliance for a New Economy  (LAANE), is to deliver middle-class quality jobs, and the associated economic multiplier effect, to hard-scrabble neighbourhoods, such as South L.A. “This is something that is necessary for those communities who, by the way, will see these rail lines cutting through their communities. The communities stand to benefit on multiple ends.”

LAANE is a 20-year-old alliance of labour, neighbourhood, social justice and environmental organizations, and its board also includes sitting politicians, academics. For many years, LAANE has pushed developers and local government agencies to agree to so-called “community benefits agreements” that would guarantee various outcomes, including the provision of jobs, training, community improvements, mitigation measures and so on.

In a few cases, CBAs in L.A. resemble Section 37 agreements in Toronto. But in many others, says Castellanos, the benefits aren’t just about physical improvements to the public realm. Rather, the proponent agrees to hire local workers from troubled communities, as happened with the Staples Centre, home to the L.A. Lakers. After the developer failed to come through on the promises it made for the first phase of the project, a coalition for local groups  coalesced to press for a broad-ranging CBA for the second phase, or face a showdown at City Council. Among the benefits: a guarantee from the owner that 70% of the jobs created would pay a “living wage.”

CBAs, as well as more far-reaching policies like Metro’s PLA, aren’t unique to L.A. The Scottish government frequently relies on such agreements, according to Steve Shallhorn, executive director of the Labour Education Centre. Other examples: the Vancouver 2010 Olympics, and a B.C. highway project on Vancouver Island.

Closer to home, Toronto Community Housing pressed for local hiring policies as part of the Regent Park revitalization, with the result that dozens of area residents got jobs in the area’s new retail facilities. Beyond that, the local examples are few and far between.

Shallhorn, however, says that a new coalition of community and labour groups — details here — have formed to persuade Metrolinx to adopt a similar approach in high-poverty areas that will be affected by the Eglinton Crosstown construction projects. Senior Metrolinx officials, adds Shallhorn, have been open to discussing the concept, and the coalition has attracted funding support from some foundations and is said to be on the radar of the United Way of Greater Toronto.

This past weekend, in fact, Castellanos and two other CBA experts were in town to talk to community groups about their experiences and offer some advice. In the coming weeks, the coalition will be looking to hammer out a made-in-Toronto version of the sorts of agreements that have been negotiated elsewhere.

What’s clear from the experiences of other jurisdictions is that CBAs aren’t just about hiving off a bit of spare cash to bankroll modest apprenticeship programs as a means of showing the procuring agency in a progressive light. In the case of both the Staples Centre and the Metro transportation projects now in the pipeline, these hard-nosed hiring agreements compel L.A. contractors and unions to direct a substantial number of jobs and training programs into high unemployment areas.

From a macro perspective, there’s no difference, of course. The procurement will generate incremental employment on a regional basis, and a labour economist would say it doesn’t matter who ends up cashing those paycheques.

From a neighbourhood and social justice perspective however, such programs aim to ensure that a solid proportion of that payroll finds its way into economically distressed communities, with all the associated spin-off benefits.

With the fierce debate over financing the Big Move reaching a critical juncture, the potential social dividend should become part of the political calculus facing the Liberals and the NDP as they bicker over the right mix of revenue tools.

Should we care if there are additional costs to such tendering policies? I’d turn the question around: shouldn’t we care more about broad social cost of the insistent under-employment in many of Toronto’s poorest communities? (Despite last week’s news that Toronto’s employment levels have once again reached the all-time high [PDF] reached in 1989, this 2012 City of Toronto survey [PDF] shows that 16 of the city’s 22 employment districts saw job losses in the past five to ten years.)
Castellanos, for her part, says it’s too soon to tell if Metro’s 2012 policy will make L.A.’s transportation projects more expensive. “This,” as she points out,” is what it takes to do business in L.A. and that can only benefit L.A. residents.”

Imagine that: a big city bold enough to acknowledge its own clout.