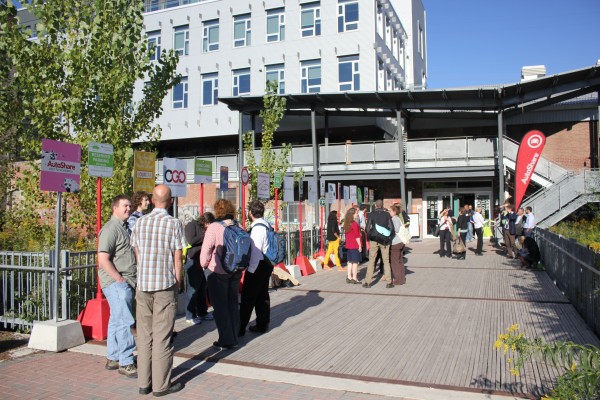 More young urban dwellers don’t want to own a car — which is bad news for the automotive industry, but good news for the burgeoning car sharing industry.

The growth in popularity of car sharing was obvious at the CarSharing Association’s 2013 Shared Mobility and Transit Conference, Sept. 16 and 17, at the Evergreen Brick Works, which saw a packed room full of industry representatives, public planning professionals, academics and entrepreneurs.

Young people’s aversion to car ownership was a recurring theme at the conference. AutoShare President Kevin McLaughlin, in a written introduction to the event, said a 2012 study found a 23 per cent drop in ownership among people ages 16 to 34, between 2001 and 2009 alone.

That’s a pretty significant drop; and, as Toronto Chief Planner Jennifer Keesmaat told the audience, it may mean that cities which fail to adapt to this change — through better access to various modes of travel, shorter commute times, and greater walkability — run the risk of losing the coveted Millennial generation, which would be bad.

“Cities without this cohort are at tremendous risk,” Keesmaat said. “Because they don’t have a future.”

Keesmaat said when the Baby Boomers eventually retire, it will create “a significant talent vacuum.”

Cities need Millennials to fill that vacuum. Car sharing may be part of what it takes to entice young Canadians to urban centres.

To address this, Metrolinx has already introduced the Carpool to GO program, which provides dedicated carpool parking at 24 stations, Belaieff said.

Additionally, Belaieff said Metrolinx is currently selecting and finalizing a partner from the car share industry. Once the contract is awarded, there will be dedicated car share spaces available at GO Rail stations for those who only need access to cars on occasion.

Metrolinx has already sent out a Request For Proposal, and the contract will be awarded soon.