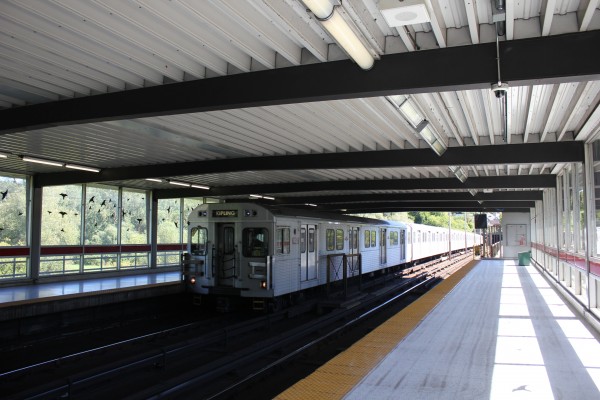 Funding public transit is essential to a city’s economic growth. Doing this, however, requires the support of the general public and, often, the open pocket books of the private sector. Problem is: neither of these groups has much time for a political tennis match. Politicking does not build public transit.

This was the takeaway message at the Transportation Infrastructure Funding & Financing summit, (yes, TIFF), last month. Hosted by the Strategy Institute at the Old Mill Inn, the two day conference was a chance for members of both the public and private sectors to talk seriously about transit, and, more importantly, how to pay for it.

Can you take the politics out of transit planning? That was the key feature of one of the summit’s panel discussions, which saw TTC Chair Karen Stintz, and Carol Wilding, president and CEO of the Toronto Region Board of Trade, go head to head.

Stintz said building transit in the GTHA has been complicated because it has involved three levels of government, and various transit agencies — this makes it unclear who is responsible.

“Over the last four years, we’ve been fighting amongst ourselves,” Stintz said.

Stintz identified the need for a transit “champion,” to explain the economic benefits better transit can provide, and a clear plan the public can support. But, later, Stintz cast doubt over whether or not these goals can be achieved.

“For a period of time there was this notion that we could take the politics out of transit planning,” said Stintz. “And if we could just approach transit planning in a rational way, then we would build the network that would make sense for the region.”

“Unfortunately, I don’t think that’s the reality,” Stintz said. “And I think that, over the last few years we’ve seen that play out.”

That didn’t wash with Wilding, who said the region has an agency, in the transportation authority Metrolinx, which is meant to operate independently, and needs to be respected.

“We need to keep this agency as a separate body,” Wilding said, pointing to the “flip-flop” over the Scarborough RT conversion as an example of levels of government not allowing Metrolinx to do its job.

“There are a number of ways to depoliticize it,” said Wilding. “There’s things we could do to speed this up, and the public is ready for it, and asking for it.”

Throughout the panel discussion, Stintz and Wilding traded barbs.

Stintz alluded to Mitzie Hunter, the Liberal Scarborough-Guildwood MPP, who campaigned on building a Scarborough subway extension, contrary to Metrolinx’s planned LRT extension. Hunter sat with Wilding on the Greater Toronto CivicAction Alliance’s board of directors. CivicAction’s main focus is accelerating region’s transportation plans, and enhancing its economic performance. Hunter won her provincial seat in a by-election, Aug. 1, campaigning on a transit plan contrary to the plan in place. One could argue this went against CivicAction’s goal of accelerating transit.

“The Liberal government ran a campaign on that, and they won,” said Stintz.

Stintz also leveled her sights at Metrolinx, saying they didn’t defend their own plan.

“I would argue very strongly that if Metrolinx ever defended its own plan, then you could say, rightly, that you could take the politics out of transit planning,” said Stintz. “But they haven’t. They’ve continued to ask council to make an opinion and to input into that plan — and so they’ve invited politics in.”

For her part, Wilding did not let Stintz off the hook.

“Let’s not go for perfection being the enemy of good, and flip-flop three or four times on it,” said Wilding. “Or introduce another OneCity or some other idea that’s out there.”

The OneCity transit plan was floated by Stintz and fellow councillor Glenn de Baeremaeker, which was vastly different from Metrolinx’s Big Move. The OneCity proposal, which included converting the Scarborough RT into a subway extension, came mere months after Stintz fought for, and won, LRT lines on Eglinton and Sheppard Aves.

The plan was summarily dismissed in council. A majority of councillors balked at the prospect of paying for it — few wanted to disrespect the taxpayers by using their money to fund transit they desperately need. But the proposal reopened the debate over the Scarborough RT. Eventually, Metrolinx refused to move forward until council made up its mind.

But that, as they say, is politics.

Can we take the politics out of transit planning? Perhaps the TTC Chair is right. Certainly, Stintz has had front row seats to some of the nastiest, most protracted arguments to face the city, during her short tenure. It’s a dismal proposition, but maybe you truly can’t identify a problem, research solutions, commit to a plan, and get it done. All the while, involving the community in the process, making sure they understand that a dollar now is ten dollars saved, a few years down the road. Maybe it’s impossible to achieve voters’ trust that a bit of extra tax revenue will actually yield tangible benefits, in real time.

Maybe. But we should ask Bradley Leeman, first.

Leeman spoke to the conference, in his capacity as acting director, infrastructure and funding strategy for the city of Edmonton.

See, Edmonton had a problem. Its sidewalks and streets were cracked. Infrastructure spending had declined in the 80s and 90s, and it was starting to show. In the late 2000s, council approved the Neighbourhood Renewal Program. They wanted to fix the crumbling infrastructure, but how to pay for it?

That’s pretty much it. They levied taxes 1.5 per cent, dedicating the added revenue to the problem identified.

If that’s blowing your mind right now, you probably live in Toronto. You can imagine Mayor Ford’s press conference, decrying council’s wanton disregard for working families. You can probably hear the Sue-Ann Levy-esque screeds about socialists and union overlords, glutting themselves on the public teat.

But in Edmonton, they used analytics to identify problem areas, educated the public about the need to fix these areas, and raised taxes to do it. Moreover, Leeman told the summit, the program is a sacred cow. Edmontonians understand what it’s about, and how they benefit from it. That’s in spite of the 1.5 per cent levy. Even the media likes it, Leeman said.

Perhaps crumbling streets in Edmonton and neighbourhoods in Toronto going unserved by higher-order transit is a poor comparison. Or, perhaps, with any identifiable infrastructure need it is possible to remove politicking from the conversation, make transparent decisions, and put them in action.

Perhaps we’re being given a line we can’t ride to work.