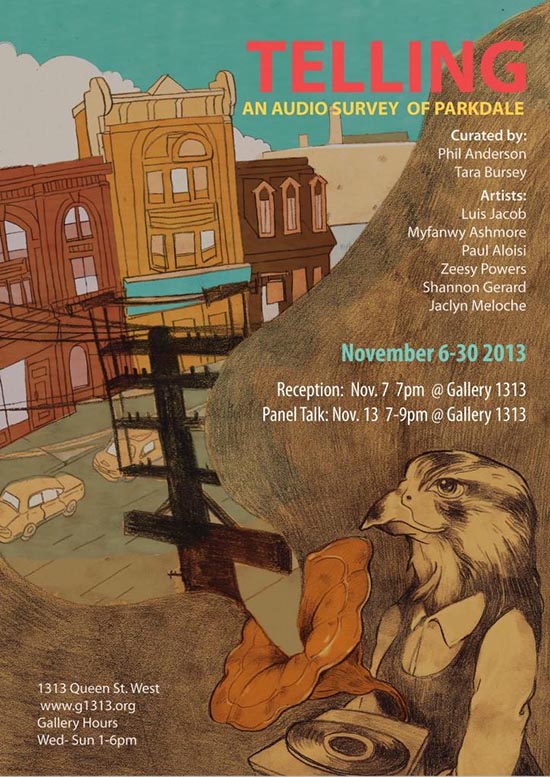 A new exhibition curated by Gallery 1313 has set site-specific audio art works throughout Parkdale until November 30th. Stop by the gallery on a Parkdale stroll to find out where all the sites are located, or attend the panel discussion this Wednesday.

Telling: An Audio Survey of Parkdale is an exhibition of site-specific audio works that will animate familiar and hidden spaces across Parkdale. Each participating artist has chosen a different site along Queen Street West as a starting point to engage and explore the history and character of one of Toronto’s most storied and diverse neighbourhoods. This exhibition pays tribute to the real and mythic spaces, stories and people important to the exhibition’s participating artist/residents.

This exhibition will tell the story of the Bird Lady of Parkdale, a local landlady who was known to feed hundreds of pigeons that would flock to her street corner each day. The sound of pigeons outside of Capitol Espresso will serve as an aural memorial for one of the neighbourhood’s former residents. In Gallery 1313’s courtyard, the sound of hooves recall when police horses were led to their stable. At Bacchus Roti, the sounds of the Gardiner Expressway– which when created caused several hundred Parkdale homes to be demolished for its construction– is juxtaposed with an image of the lakeshore, serving as a reminder of the often complicated relationship between nature and the built environment. These and other stories conjured by participating artists will reside with the public as works of art, encouraging current residents to tell and trade their own stories, thus taking an active role in the creation of a collective community history.

“Cities have the capability of providing something for everybody, only because, and only when, they are created by everybody.”
– Jane Jacobs, The Death and Life of Great American Cities