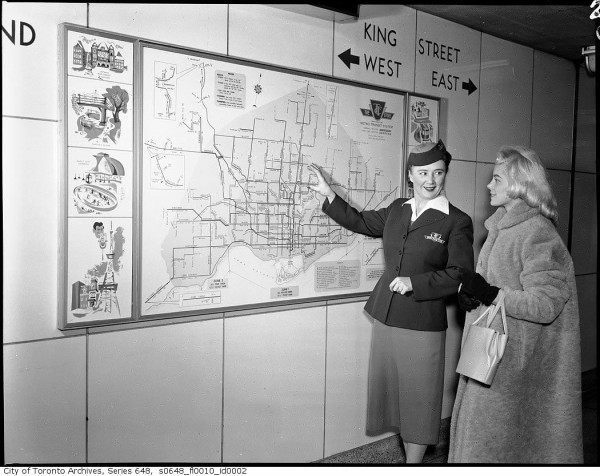 Getting Directions on the TTC, 1957 Photo Courtesy of City of Toronto Archives

With this post, Spacing Toronto welcomes a new contributor, Shoshanna Saxe. Shoshanna is a proud Torontonian and a civil engineer. From 2009 to 2012 she worked on the design of four forthcoming transit stations in Toronto. Shoshanna is currently working on a PhD at the University of Cambridge researching subways. She will be writing about transport and transport infrastructure. @shoshannasaxe

The first segment of the Toronto Subway opened to great fanfare on March 30 1954; the original Yonge Line had 12 stops running from Union to Eglinton. Two decades later, these stations consistently showed up in academic literature as the best-planned in North America. Toronto was world-renowned for its transit system and had the highest transit ridership in the continent. What made the Toronto subway successful?

Ideally, subways and local development create a positive feedback loop: the construction of new subway stations provides an incentive for development nearby which, in turn, contribute to the success of the subway system and to the finances of the city that built it. This relationship between subways and development has always been one of the selling points used to promote subway projects.

By the 1970s it was clear from the experience in other cities that promised development didn’t always appear and that Toronto had been more successful than most in linking transit and development. Constructing transit stations, it turned out, was not enough by itself to spur new development and achieve high ridership.

In a seminal study from 1977, “Land Use Impacts of Rapid Transit”, the San Francisco engineers Robert Knight and Lisa Trygg found that successful subway stations were supported by aggressive public policy in the form of zoning and development incentives. Toronto was held up as a best-case scenario of what it is possible to achieve with careful investment, design and policy.

The TTC has studied (PDF) the neighbourhood density requirements that lead to well-used stations. To be economically successful, as defined by the TTC, stations need to have a density of 100 people or jobs per hectare within 500 meters. For the Yonge Line, still Toronto’s busiest, much of its density comes from buildings built in the 1950s. From 1952 to 1962 more that 90% of all office construction in Toronto was built within 5 minutes of Yonge Street and its subway. Half of all new apartments built between 1954 and 1984 were sited walking distance from a subway station. In the first decade of operation the subway was responsible for a $10 billion (1968 dollars) appreciation in land value along Yonge Street. 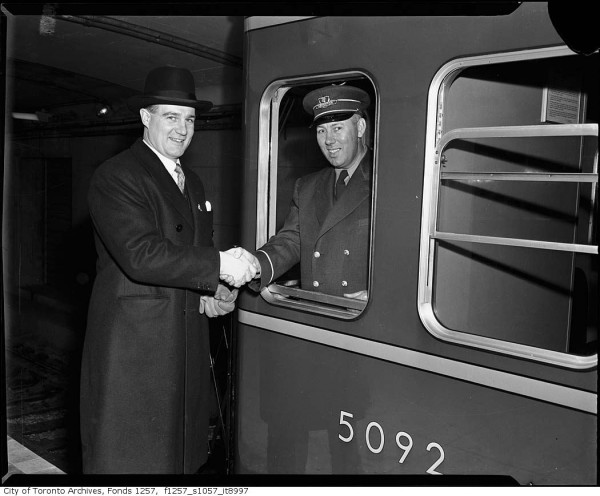 Opening of the Yonge Subway, 1954 Photo Courtesy of City of Toronto Archives

In concert with the initial construction of the Yonge Line, the Metropolitan Toronto Government changed nearby zoning to allow for 12 to 1 floor area to footprint ratios (FAR) and awarded density bonuses. The subway started by providing much-needed access to the central business district. Government buildings were built near the subway to demonstrate public faith in the system, which inspired private developers to follow suit. Stations were sited beside plots of land, such as underused industrial yards, that were available for development. In addition, costs to developers were actively limited; long term leases were made available on publically owned land near stations removing the expense of land purchase. Even the structure of the stations were designed and constructed to facilitate construction of tall heavy buildings nearby; the strength of the subway structure limited the need for expensive foundation work in new buildings. The bus system was aggressively integrated into the subway system to facilitate seamless connections and ease of use.

Moreover, the city followed through on promised projects, allowing developers to have confidence in them. In 1966, the metropolitan planning department recommended that Toronto build 59.5 km of subway by 1980. Toronto exceeded this goal—by 1980 it had 63 km of subway operational or under construction.

The legacy of this early planning success continues to be visible in Toronto, even outside the downtown core. As the Yonge-University-Spadina Line was extended, similar development-centric polices contributed to the success of the Sheppard Centre and Yorkdale Shopping Centre. The vitality of Toronto through the second half of the 20th century is often linked to the success of the city’s transit system.

In 1986, when writing about the great success of Toronto’s and other Canadian city’s transit systems, the famed urban planner Robert Cervero noted: “Whether Canada is light-years ahead of most other nations will perhaps best be determined by future transportation historians. Regardless, it presently offers a gold mine of fresh ideas and insights in the transit field that should not be over looked.”

The current Toronto Subway has 68 operational km, slightly more than in the 1980s. Over the past 25 years the system has been expanded twice. Downsview Station extended the Yonge-University-Spadina line by 2 km when it opened in 1996. The 5.5 km Sheppard Line followed in 2002. As the TTC moved away from system expansion Toronto’s reputation as a transit leader faded.