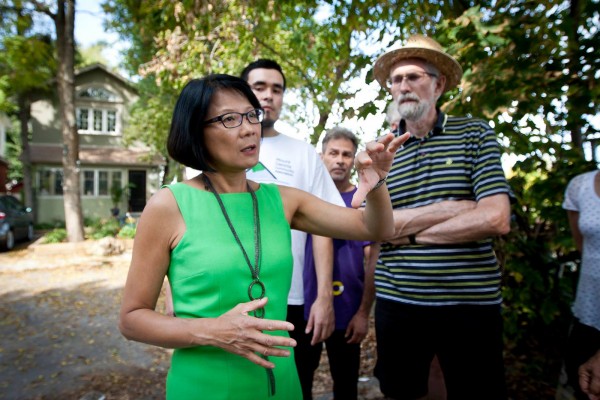 Throughout this gruelling campaign, voters have been treated to the uninspiring spectacle of a progressive candidate who has spoken to them – us – in multiple voices, none of them especially genuine.

There is the soothing, soft-spoken Olivia Chow, talking in low tones about children and her personal journey. Then there is the opposition critic Olivia, firing off gotcha questions, journo-style, on the many and varied failings of John Tory’s Smart Track scheme. And finally there is the almost-but-not-quite-funny Olivia, going after the cute riposte, such as her napkin stunt at this week’s Arts Vote debate.

But the woman who delivered a shoot-from-the-hip smack down in response to a racist question from an audience member at a Wednesday evening debate – that’s the authentic voice I’ve been waiting for, the one we all signed up to hear in this city’s epic fight to rid itself of the scourge of the brothers Ford.

The older man launched his question with a dog-whistle reference to Chow’s immigrant background, and went on to ask why she believed she had the qualifications to run the city, especially after living for free in a co-op building.

Chow has been on the receiving end of appalling racist crap since beginning of the race, a troubling echo of the homophobic slurs hurled at George Smitherman during the 2010 election. Let’s not forget who talked in council about gay men and AIDS, and then Asians “working like dogs.” We know where this stuff comes from.

And so Chow was not only angry; she allowed herself to express that anger, as opposed to dutifully delivering the over-rehearsed lines written out for her in the briefing binder that’s always under her nose. As she stood up to take on this man, she rediscovered the voice that so many people I know have found to be missing in action over these many months. She could likely have delivered an encore, given that neither John Tory nor Doug Ford sitting on the stage with her, made any attempt to repudiate the questioner’s twisted premise.

Chow’s certainly got it in her. She came of age in politics at a time when there was much dubious hang-wringing about Vietnamese “gangs,” “monster homes” and other proxy enemies. She endured the indignation of serving on the Toronto Police Services Board, an institution famously antagonistic towards strong, assertive women like Susan Eng and Judy Sgro. Point is, you don’t get as far as she’s gotten in politics without being tough, sharp-elbowed, and outspoken.

I’ve known Chow, as a journalist, for many years, and one particular habit of hers has always stuck with me. As I’d be scribbling away semi-illegibly in my notepad, she’d be reading what I’d written – up side down! – and would then correct my notes, jabbing with her finger at phrases I’d jotted down. It’s not a big thing, but I was always taken by the sheer audacity of that gesture. She wouldn’t flatter me by saying I’d just asked a terrific question. Chow corrected and argued a point like she meant it.

With her rebuttal to the man at the debate, Chow, perhaps inadvertently, gave full-throated expression to the anger that so many Torontonians feel today about the absurdly debased state of our civic politics. We are all but addicted to the grunts and putdowns uttered by the two fools who’ve dominated our public discourse for almost four years. We’ve watched them drive their ostentatious SUVs back and forth over the city’s political decorum until it resembles so much mangled road kill.

But none of the leading candidates have found a way to channel that entirely appropriate anger, because their strategists tell them that they’re going to alienate this group or that group. And so instead of genuine emotion, we get poll-tested talking points: the circus, building consensus, and so on and so forth.

For my money, I’d like to see someone who’s mad as hell and isn’t going to take this abuse any more. And who isn’t pretending.

Chow wasn’t pretending the other night. She’ has clearly had it up to here.

Hey, we all have. To her handlers, I’d say this: You have nothing to lose at this point in the game. Just back off and let her speak her mind.