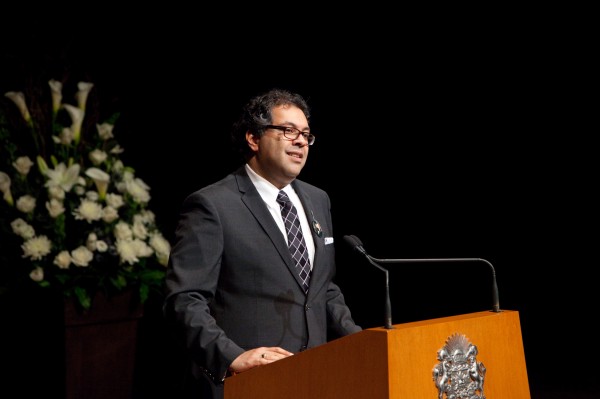 After the interminable awfulness of Toronto’s election campaign, and just hours following the horror show in Ottawa, Calgary mayor Naheed Nenshi last night ambled on stage in a Ryerson University lecture hall and delivered an extraordinary speech which reminded me that politics, at its very best, is about finding what binds people together instead of devising nefarious ways to drive them apart.

Invited to deliver the annual Jack Layton Memorial Lecture, Nenshi, according to Ryerson’s advance billing, would “discuss the important role cities play in fostering economic growth as well as nurturing the social and cultural well-being of its citizens… [and] address the leadership and resources required to fully realize the potential of Canadian cities.”

Instead, he told the audience of a couple of hundred people a mesmerizing account of what happens to a city, and its mayor, when a natural disaster lays waste to whole neighbourhoods. For close to an hour, Nenshi wove together a tale, from his unique vantage point, of how Calgarians — not, mind you, Calgary, but its people — responded to the surging flood waters that inundated vast swaths of the city’s core.

It was, quite simply, a virtuoso performance, as well as evidence that political oratory — which has become so debased in our hyper-partisan culture — is still a literary form with the potential to inspire, to connect, and to bring about change.

Nenshi, for starters, has a musician’s command of his voice and can modulate it with exceptional precision, moving effortlessly from low, meaningful tones to ironic asides and perfectly timed pauses. He is funny and self-deprecating. And he knows how to engage the people in both the front row and the back row.

More importantly, Nenshi showed himself to be a gifted raconteur, the political equivalent of Stuart McLean. His performance underscored the fact that great politicians must also be great storytellers.

The tale he related had to do with his own experience of traveling through a week during which so much could have gone wrong and so much ended up going right. Nenshi is a politician, and so there was just enough of him and his decisions to remind us that he wasn’t merely a bystander. But mainly, his narrative focused on the thousands of Calgarians he encountered during that week in the summer of 2013 — from emergency responders to garbage collectors to ordinary people who turned up to support their flood-drenched neighbours.

Racing back from St. Catharines, where he was attending the wedding of an old friend, Nenshi told how he found himself thrust into the centre of a complex emergency management process, tasked with making difficult and at times risky choices. He also spent a lot of time traveling to the afflicted areas, meeting people, observing the carnage, and carefully remembering the things he’d seen and heard.

Nenshi’s tale was full of average people with first names — no labels, no ethnicities, no identifying neighbourhoods, no partisan affiliation. Some had been washed out, others were there to help. We saw these constituents from his perspective, as if he was taking us along for a ride, inviting the audience to bear witness to a disaster from a perspective that he understood is uniquely afforded to someone in his position.

The story is full of finely observed detail, and Nenshi showed himself to be the sort of onlooker who has the empathy necessary to fully identify with the people he encountered. At one point, he showed a slide of a pile of soggy belongings waiting on the curbside to be hauled away. Nenshi invited the audience to look closely at that slide: those piles, he said, weren’t just a waste management problem; they were people’s lives: children’s toys, couches that someone had painstakingly saved up to buy, ruined keepsakes.

Having set the scene, he segued into an aside about his encounters with the garbage collectors tasked with clearing away all that debris, and how they offered to work extended hours to bring some order back to those soggy streets. By then, he’d brought us to the point of the parable, gently but meaningfully made, about how he had come to realize the true importance of public service.

He referred to the 20,000 civil servants at the City of Calgary as “colleagues” — imagine! — and made it clear that they showed, by their actions, that they belonged to the communities they served. It was strong stuff, and a valuable message in a city where our leaders do so much to malign the civil service.

Much of Nenshi’s story had to do with the way thousands of volunteers fanned out across Calgary and just started helping. The anecdote was fascinating, as he began by relating how he bruited the possibility of putting out a general call for volunteers, only to be argued down by the city’s lawsuit-averse lawyers.

The next day, he learned that the lawyers had given a reluctant green light, and there was a public service announcement on the radio, asking volunteers to show up at a local stadium at 10a.m. on a Monday. The officials in charge told him they expected only a few responses, given the short notice and the time of day.

Thousands of people showed up, however, and Nenshi eventually defied his officials and told the crowd to simply go to the afflicted neighbourhoods and begin helping – they’d figure out what needed to be done quickly enough. As Nenshi said, he drew strongly on his core political philosophy: that people aren’t stupid, and mostly want to do the right thing. Which, he said, is just what happened.

The rest of his speech became a collage of stirring anecdotes about the people he met as he traveled, often on foot, through those formerly flooded streets, watching constituents assist one another in putting their lives back together. He said he’d never observed anything quite like the power of that tidal wave of mutual support. On one such excursion, Nenshi came across a hastily painted plywood sign that read, “We lost some stuff, we gained a community. Thank You.”

Adversity often brings out the best in people, and that’s not unique to Calgary. We saw it here in Toronto, during the 2003 black-out, and again during the holiday season last year, after the massive ice storm. What struck me so forcefully about Nenshi’s speech, however, is that he recognized how a mayor can be the storyteller-in-chief, the person who can weave the disparate narratives of the individuals who live and work in a city into the story of that city itself. This was about hearts first, minds later. Multiplying, not dividing.

At the end of his speech, Nenshi said he consciously chose, for this speech, to avoid becoming mired in the details of urban policy, important though they may be. Mostly, he said, the job of civic leaders “is about getting the community right.”

It’s outstanding advice for whomever becomes Toronto’s next mayor.