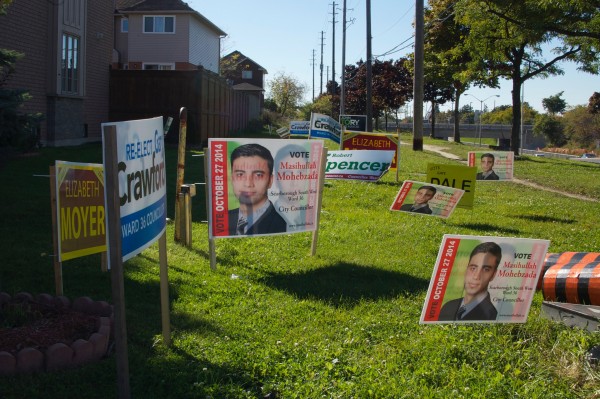 As the dust settles from the 2014 municipal election and political commentators begin to reflect on what happened, two common themes are emerging. First, there seems to be universal disappointment in the lack of turnover on council. Only one sitting councillor was defeated which is seen as further evidence that incumbents essentially have a “job for life” due to name recognition and lazy voters. Second, there has been endless chatter about the length of our municipal elections. Many pundits are calling for a shorter election period, with statements such as “why do we need a ten month municipal election, when our federal elections are only five weeks long?”.

Both of these reflections are overly simplistic, lazy, and essentially wrong. In this post today, I’ll address the myth of the five week election campaign. Next week, I’ll post about the myth of eternal incumbency.

At first glance it would seem as though our municipal elections are roughly eight or ten times longer. “That’s absurd!” you might think. You’d be wrong. In fact, you’d have your facts completely backwards. The truth is, our municipal campaigns are actually shorter than our provincial or federal campaigns. Here’s why.

Municipal candidates aren’t allowed to fundraise until the election period starts, ten months before election day. So if I want to run for city councillor in 2018, I need to wait three years before I can raise a single penny, or spend a penny. That means that for the next three years I can’t produce any flyers, organize public events, maintain a website, etc. But if I want to run in the provincial election in 2018, I have access to pools of money throughout the next four years. First, each riding association is allowed to raise as much money as they want, any time, any year. They can organize events, design materials, and do mail-outs at anytime. Second, during the nomination period (and there is no limit to how early this can happen), I’m allowed to personally raise as much money as I want, on my own nomination campaign. I can spend that money of posters, videos, websites, and mailings. I would be building name recognition and building my organizational base, far before the actual “election period” begins. The third pool of money is the official campaign budget. Unlike a municipal election, there are loopholes that allow a campaign to raise and spend money well before the election starts. For example, my riding association can simply ‘transfer’ money to my campaign, even though they raised that money before the election period. Lastly, I also benefit from the largest pool of political money around: the central spending of the party. Which brings us to….

Comparing our ten month municipal election to our alleged “five week federal campaign” ignores an obvious difference. Parties! As I stated earlier, those who want to run for city council in the next election aren’t allowed to spend a penny until January 2018. Meanwhile, all the major parties are spending enormous amounts of money every single day on promotions, staff, design, marketing, media relations, public events, database management, polling etc. All this, despite the fact that we’re not in the middle of an “election.” For example, new campaign commercials are released almost every month by the Conservatives, Liberals, and New Democrats. These parties raise, and spend, millions of dollars in between elections. Which means, essentially, they are always campaigning. (Note: this applies not only to provincial and federal elections, but also for party-based local elections as well, in cities such as Vancouver and Montreal).

If we had parties at the municipal level, if we had separate legal entities such as riding associations that were allowed to raise and spend money in between elections, if we had municipal nomination campaigns with no spending limits whatsoever, then we could compare our local ten-month campaigns with our five-week federal campaigns. But in the current context, the simple truth is that our municipal campaigns are actually much shorter than their provincial and federal counterparts.

However, there’s one exception to this rule. One small group of municipal candidates are allowed to skirt the rules and spend money before the election period begins. In fact, their publicity campaigns are funded publicly, by the taxpayers, promoting the candidates for four years. These are, of course, our city councillors. While all aspiring candidates have to wait until 2018 to raise a penny, or even photocopy a simple leaflet, our 44 councillors will be mailing us flyers, calendars, and fridge magnets for the next four years, each piece of material guaranteed to prominently feature their name and charming photograph.

Here’s another piece of data worth looking at: each municipal ward has, on average, 60,000 residents. That’s a lot of voters to connect with during a campaign. While provincial and federal candidates (and municipal candidates in Montreal and Vancouver) can rely heavily on their party brand and party leader to help secure votes, local candidates have to rely solely on personal connections with voters, built by knocking on doors and talking to residents one-on-one. Think about that: trying to connect with 60,000 people, at their doorstep. That takes a very long time. To be specific, it takes about ten months. And let me point out again, that provincial and federal parties can knock on your door anytime with glossy materials or mail endless amounts of materials, any day.

If we reduce the municipal election period, that would mean that new political challengers have even less time to raise money and spend money. Even though they are already currently faced with the shortest campaigning period it would become even shorter. All the while, the incumbent councillors are metaphorically knocking on our doors with glossy pictures of themselves and/or mailing promotional materials to our homes, paid for by taxpayers.

Knowing this, it shouldn’t come as a surprise to find out who is actually pushing for shorter campaign periods. It’s the Association of Municipalities of Ontario (AMO), the same folks who also successfully pushed to change our municipal council terms from three years to four. AMO represents elected City Councillors and Mayors all across Ontario, so it makes sense that they would like to see fewer elections and shorter campaign periods. But it’s our job, as citizens, to make sure that we’re informed about these proposals and the facts that lurk behind over-simplified sound bites.

While you may not see it, the political machines that drive election campaigns are churning each and every day. Provincial and federal campaigns begin years before election day, and elected councillors get to communicate with potential voters for four solid years before the next election is held. The only candidates in Canada who are currently restricted from raising money and campaigning before the election period, are municipal candidates in non-partisan elections.

So when you hear someone say “It only takes 28 days to elect a new provincial government, why do we need ten months to choose a new Council?”, tell them they’ve got it backwards.