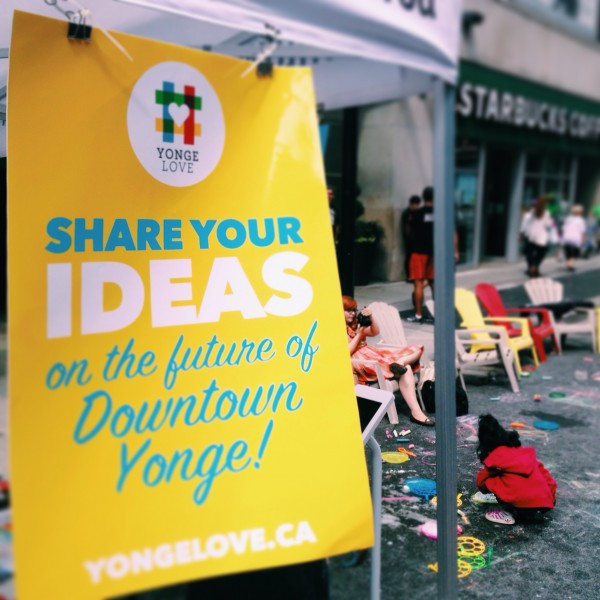 As with all things (and people) deemed iconic, Yonge Street’s popularity has experienced its slumps and fair share of competition from neighbourhoods such as the Distillery District, the Annex and what we are now annoying referring to as “Upper Parkdale”. And although Toronto is amidst a number of hot (meaning exciting and controversial) urban planning and development projects, we shouldn’t underestimate the impact that Yonge Street’s redevelopment will have on the entire city. Or at least this is what Mark Garner, Executive Director & Chief Staff Officer with the Downtown Yonge Business Improvement Area (BIA) thinks. In fact, I’d wager that there are few people more passionate about the transformation of this historically significant street, which he refers to as “the second neighbourhood” of most Torontonians.

Within a couple of minutes I totally get Garner. In many ways he reminds me of one of the guys that I grew up with proudly reppin’ the block. Our conversation begins with him quizzing me about my knowledge of Yonge Street. I play along because in addition to leading the BIA, he’s a local guy, for whom Yonge Street is not just the site of a prominent planning and development project. It’s his neighbourhood. So I tell him about my experiences as a youth, travelling from my inner-city community to sneak into clubs. Later, while attending university, I took quick study group breaks to grab a bite from Salad King. Sometimes, during the summers, I’d find myself ambling along the street and unexpectedly find myself purchasing a CD. I mean back when people did that sort of thing. As an emerging professional I loathed the sterility of the mall and opted to build my work wardrobe with unique pieces from independent stores and boutiques. Eventually major chains began to dominant the street’s formerly eclectic retail and cultural ecology. Spaces were constructed but didn’t necessarily prioritize placemaking, fluid community interaction or the local economy. Condos were erected but didn’t cater to the kinds of mixed-income and diverse tenant groups that add texture to communities while maintaining a sense of social justice and accessibility. And what the hell were they thinking with Sam’s? Such an important cultural site yet the closing lacked appropriate public engagement, celebration and cultural archiving.

I get the sense that he’d be more than happy to listen to me ramble on about Yonge Street because having an opinion — would be preferable to simply sitting back while our city, and this street in particular, is planned and developed without robust conversation, consent, and creativity. It is this genuine willingness to listen, which underpins the YONGE LOVE project.

I became aware of the project on Facebook. The post was smart and uploaded by Ryan Patterson, an exceptionally talented Creative Director and urbanist so I clicked to learn more. More than anything it was an invitation of sorts. An open call to share perceptions of the street, past and present stories, and vision for the future. Digging further, found their Instagram presence pretty impressive — populated with pics of food, friends, family — including a pair of distinguished English Bull dogs. Captions ranged from the beautiful to bizarre perfectly capturing the vibrancy of the street. Offline there’s a pop up video booth and their ace street team makes appearances at various events around the city. There is also the production of resource papers for anyone who wants to untangle or find a way into urban planning and development conversations. The curious thing is that the engagement activities and prompts are wide open — they aren’t centralized around a particular site on Yonge Street or building. I initially wondered if the frame was too wide, not focused enough. But in thinking things through I began to appreciate the ways in which the project has a clear engagement strategy and deliverables while managing to remain emergent and exploratory. It’s a bit of an urban thought-experiment. The idea is to curate and synthesize a broad range of public stories, concerns and ideas so that the information can be catalogued and referred to when responding to future planning schemes and advocacy efforts.

And the timing of the project is perfect because the future is here. The plans for Yonge Street are exhaustive. Everything seems in perfect order — an urban park, mixed-use retail, and high-density housing. However, in addition to sound but sometimes a bit too prescriptive urban planning formulas, great cities are built upon our collective knowledge and aspirations. I get the sense that Mark and the project’s co-lead, an accomplished urban planner, Leigh Sherkin understand this. Naturally, the pair are focused on retail, Leigh actually represents the fourth generation of women in her family to be connected to the street’s retail sector and I’d imagine that a large aspect of Mark’s role within the BIA is to represent the interests of local business owners. That said, the two have opted to embrace an inclusive approach engaging community stakeholders such as Toronto Community Housing Yonge Street Mission and Covenant House. They are also working to better engage the First Nations population in the neighbourhood. I think this is especially important because the contemporary Yonge Street we know today sits atop a little known First Nations burial ground at Bloor and is currently the home of a substantive urban First Nations population. It’s interesting the ways this major arterial road not only connects both shores of Lake Ontario and Lake Simcoe, a multiplicity of people with diverse needs, and also, the past and the future.

This is a lot for a single urban engagement process to address, but like love, passion and personal investment is at least half the battle.