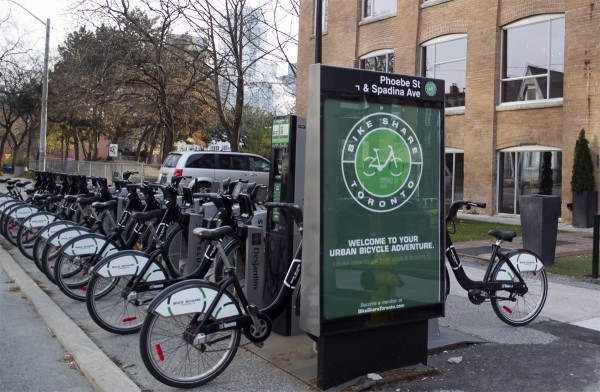 As a long-standing Bike Share Toronto member, I was excited to read that the Ontario government is investing in additional bikes and an expansion of the network. And as a cities/infrastructure nerd, I of course immediately started drawing dots on maps and chatting with anyone who will listen about where new Bike Share stations should be placed and how to get more people using the network.

According to the Metrolinx media release, the new docking stations and bikes “will be located close to transit stations and in dense areas where demand is likely to be strong, which helps connect users to transit in the first and last kilometres of their journeys.” Placing bikes near transit stations is clearly a good idea, but more will need to be done in order to get people off of trains and onto bikes. Improved on-street cycling infrastructure will play a major role, but there’s another factor: Bike Share Toronto has never been marketed as a commuting option.

At the program’s outset, many stations were placed seemingly to benefit tourists. Later, then-owner Bixi ran an ad campaign that pitched bike sharing as way to hop from one social destination to another — which always struck me as only slightly better than the cycling strategy Rob Ford published in 2010, which depicted cycling as a purely trail-based recreational activity. There are many possible reasons why Bike Share Toronto is marketed in this manner. Perhaps the Toronto Parking Authority, like the program’s previous administrator, figures that anyone who wants to commute to work on a bike is already doing so. It might also be the limited range of the network, or the fact that commuters’ unidirectional nature would create bike-distribution hassles.

Yet despite all this, many Bike Share Toronto members use the system to get to and from work — often in combination with public transit. If this is indeed the kind of user Metrolinx and the City intend to attract by putting more bikes outside of subway stations, their way forward is clear: Think of bike sharing as an inexpensive, modular, smaller-scale version of the downtown relief line, and act accordingly. Prioritize installing — and maintaining bike supply — at stations on Line 2 that encourage people travelling east and west to disembark before Bloor-Yonge or St. George, and instead grab a bike for those aforementioned “first and last kilometres of their journeys.”

But then — and this is crucial — support this effort with bike lanes, and foster it with marketing that shows how bike sharing can become a vital part of a subway rider’s daily transit mix in general, and as a savvy way to bypass the downtown stations of Line 1 in particular. Because, though bike sharing is by no means the sole solution to transit overcrowding, Toronto’s program has a wealth of untapped potential. All that’s needed, along with this new investment, is a strategic shift in how Bike Share Toronto is viewed — by its administrators, and its thousands of potential members.