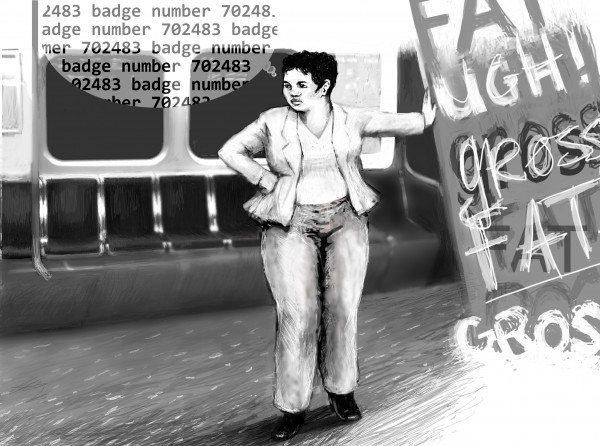 Last year, on a beautiful mid-September morning, Tomee boarded the subway in high spirits. She was headed to a rewarding job at a reputable university, pleased with the progression of her blossoming relationship, and felt great about her appearance. And then a few of her fellow passengers cold-cocked her with a series of hurtful comments about her weight.

The three strangers, two males and a female, all in their late 20s, proceeded to verbally pummel Tomee with a barrage of fat insults. Passengers averted their eyes as she contemplated a suitable response. Everyone on the subway was silent except for the trio who refused to relent with the name calling.

Approximately 6 million Canadians are obese, and sadly, many of them have been on the receiving end of public shaming and bullying. Ironically, as the population becomes physically larger, negative attitudes towards overweight people have also increased. Advocacy groups like the Obesity Network equate discrimination towards obese people to racism. And like all “isms” there is a proliferation of inaccurate and deeply unkind stereotypes. Many people believe that overweight and obese people are lazy, lacking self-control, and undisciplined. This creates an alarming number of social and systemic barriers for obese people, including their quality of experience when travelling locally and abroad.

The issue of what one New York Times essayist refers to as “travelling while fat” is not new. For the past couple of decades the airline industry has wrestled with the issue of individuals requiring more space. Seat belt extensions became more widely used, propositions to charge obese people additional travel fees were presented, and research studies looking at the quality of travel experience for obese people were undertaken.

These accommodations and conversations did little to address the real issue. But fortunately, urban planners were beginning to make interesting connections between active transportation and population health. This inadvertently reframed the conversation from tourism travel to include daily commuter experiences. Planners noted that as metropolitan areas began to stretch over larger geographic regions people began to develop an over-reliance on cars. Commuters abandoned active modes of transportation such as walking, cycling, and public transit. This led to numerous inquiries, which further investigated the link between public health and public transit.

In fact, medical practitioners have corroborated the health benefit claims asserted by urban planners creating a substantive business case. For example, the Improving Health By Design in the GTHA report [pdf], led by a group of physicians, unpacks the links between urban planning, active transportation, and public health. The report finds that obesity and physical inactivity (though I’m compelled to point out the two are not always synonymous) costs the region $4 billion and is responsible for 12,500 new cases of diabetes annually. It also tackles the environmental impact of an urban car culture, which threatens our air quality. Among a number of key recommendations the report calls for greater investment in public transit, centralizing public transit (and other forms of active transportation) in planning processes, and strengthening related provincial policies. This is just one of many reports, which thoroughly links public transportation to public health.

Most of us agree that public transportation is a healthy way of moving around.

The problem is that we haven’t adequately explored ways of making the daily commute comfortable for everyone, especially individuals who may benefit most from active transportation options. Universal Design principles offer clear guidelines for achieving this goal. However, the design of many public transit vehicles, and worse, some commuters, are simply unforgiving of larger body types.

In the time that it took you to read this, Tomee casually repositioned herself so she could get a clearer view of the company badge sewn to the uniforms of the two men. She also noted distinctive features such as their eye glasses and tattoos. Later, she conducted an online search, which led her to one of her public transit bullies. Ironically, his photo was posted on his employer’s website because he had been named employee of the month. Tomee contacted his head office. They immediately issued an apology and promised to follow up with the employee.