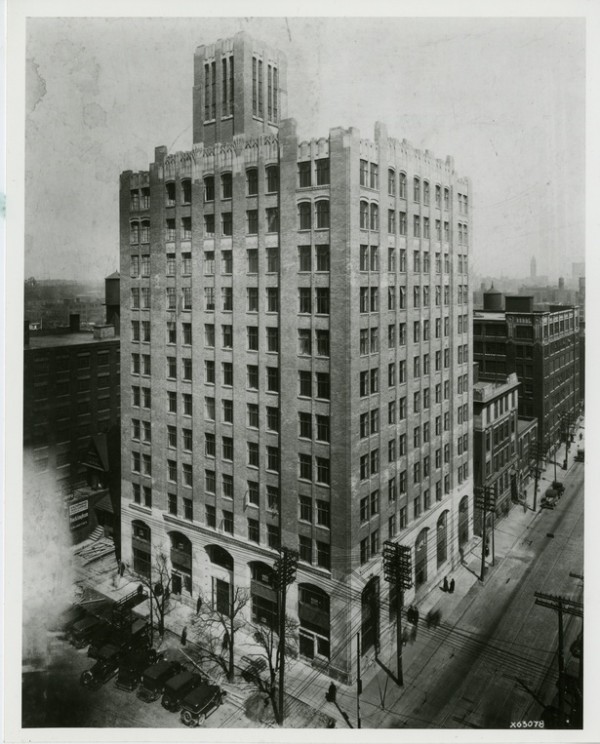 Facing each other across Spadina Avenue just north of Adelaide, the Tower and Balfour Buildings frame a striking entryway into Toronto’s Fashion District.

Previously known as the Garment District, the neighbourhood was home to many of Toronto’s textile workers, who were predominantly Jewish immigrants.

Masterpieces of Art Deco architecture, the Balfour and Tower buildings were originally built to house those garment businesses and their showrooms, raising the prominence of the industry, and the city with it.

Designed by Benjamin Brown in the late 1920s, their towering elegance was symbolic of Toronto’s transformation into a modern metropolis — a financial, cultural and transportation hub with a swelling population over 200 000.

That elegance extended to several other Brown-designed buildings nearby including The Commodore on Adelaide, The New Textile Building on Richmond (now an OCADU building) and the Hermant Building at Yonge and Dundas Square.

Despite defining the city at a critical point in its history, Benjamin Brown has remained relatively unknown.

At a time when people weren’t interested in Toronto’s architectural history, let alone the work of a single architect, Brown’s entire collection of drawings were forgotten about in the architect’s garage and left to deteriorate.

When Brown died, he left the collection to fellow architect Jim Levine, one of the only people who recognized the value of the work.

The Ontario Jewish Archives took over the collection in the 80s and has painstakingly restored it, ensuring that a valuable archive of drawings that document the emerging modernity of Toronto was not lost. Highlights of the collection are now on view in an exhibit of Benjamin Brown’s work at the Urbanspace Gallery on the ground floor of 401 Richmond, until April 23. 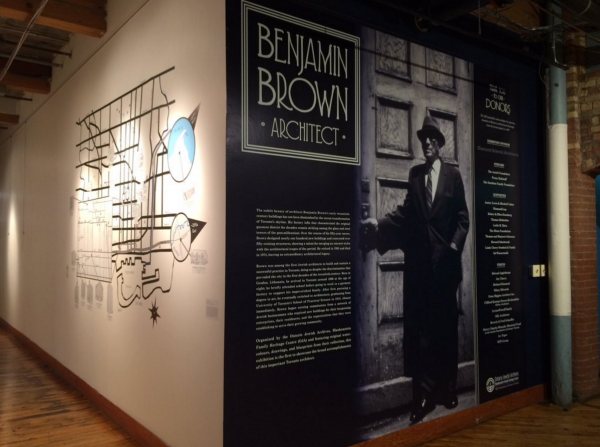 The exhibit is an opportunity to get an up-close view of Benjamin Brown’s expertly executed hand-drawn plans and renderings. Brown was a master of lines. His incredibly detailed drawings even include the buildings’ ornamental windows and decorative stonework.

Brown’s drawings are also poignant portraits of Toronto in the 1920s and 30s, where the aerodynamic shapes and sleek lines of Art Deco and Art Moderne dominated architecture and fashion. In the cinematic rendering of the Tower Building – a night time, rainy scene that is a far cry from today’s style of renderings – Spadina is bustling with crowds in stylish coats as streamline automobiles motor by. 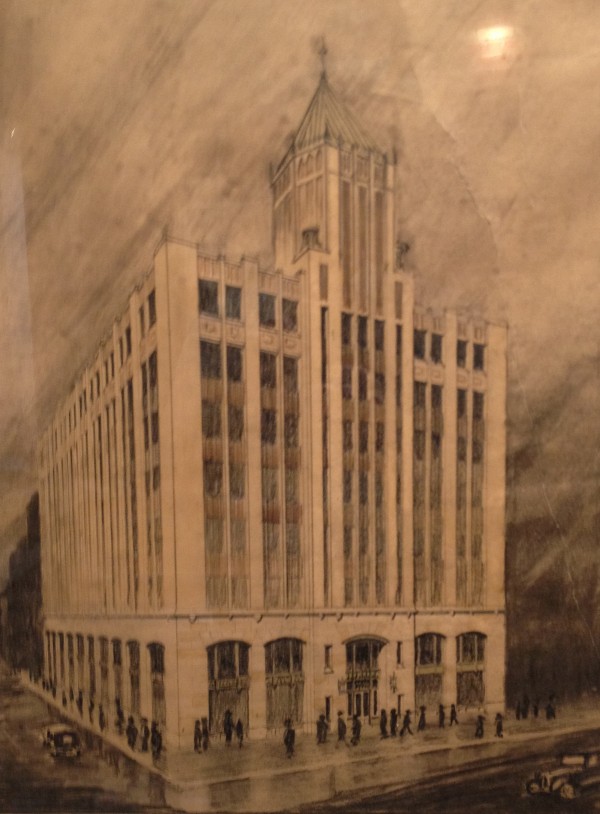 Brown was one of the first Jewish architects to build and sustain a successful practice in Toronto despite the discrimination within the city in the early 1900s. As a result, he was the architect of many spaces for the Jewish community, including Beth Jacob Synagogue (today, a Russian Orthodox Church) and the Primrose Club on Willcocks, a social club for Jewish men (today, it’s the University of Toronto’s faculty club).

As an artist and urban geographer, I was delighted to participate in the exhibit by illustrating many of Brown’s best known buildings, tracing over his lines and creating a map showing the geographic expansiveness of his life’s work. Indeed, Benjamin Brown has hundreds of commissions spread throughout the city. 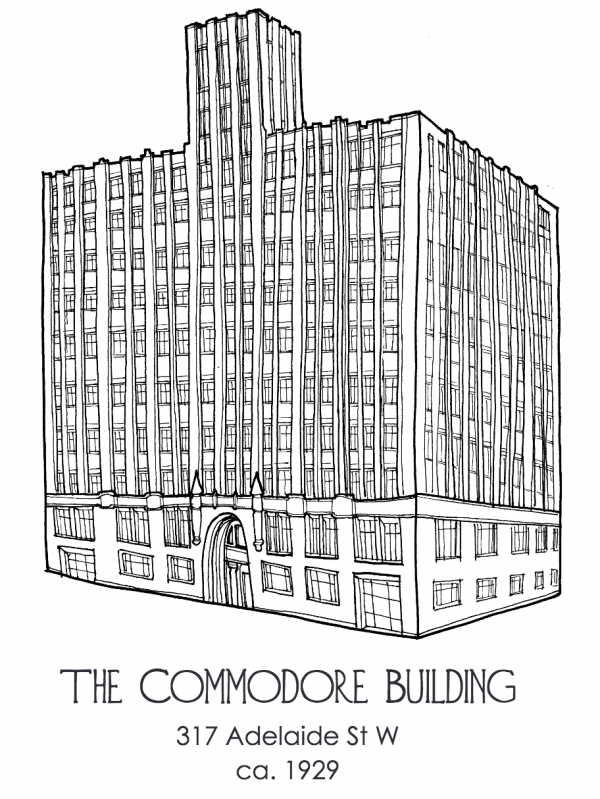 My illustration of the Commodore Building on Adelaide. Unlike Benjamin Brown, I didn’t use a ruler!

Looking at Toronto through the lens of a single architect is an opportunity to make connections between the city’s disparate neighbourhoods and styles. Benjamin Brown’s designs range from the Art Deco towers downtown to utilitarian garages in the west end, storefronts on Bloor and Georgian, Tudor and Colonial Revival houses in midtown.

Through the work of Benjamin Brown, an intelligible thread runs through Toronto, a city indebted to the grandeur he helped established at the turn of the twentieth century.

See the exhibit of Benjamin Brown’s work at the Urbanspace Gallery on the ground floor of 401 Richmond, now until April 23.