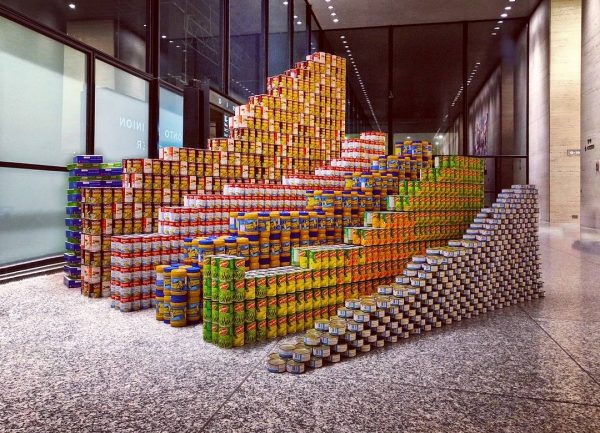 I’m standing in front of a large pile of yellow cans of fruit — cherries, peaches, fruit salad — that has been designed and shaped to look like something. Up close, it’s hard to exactly what that something is, but stepping back a bit, the image of a big, seated, yellow Buddha starts to become a little bit clearer. (I might add that the yellow cans bring Homer Simpson to mind.) Other canstructions (the proper portmanteau) have this same effect: it isn’t until you stand back from the structure that the design can be fully seen. In their descriptions of the structures, the architects who designed the canstructions talk a lot about capturing the essence of a thing, likely because canned goods make for a somewhat inelegant and inexact medium for realism.

It was, all things told, an impressive display at the Design Exchange on Tuesday night, where Canstruction Toronto held its 17th annual Canstruction Awards, pitting architecture and design firms against one another over who can marshal their cans into the best display of art, structural design, and pop culture whimsy. On display was an impressive range of canstructions, from a large yellow Buddah and a giant coffee cup to David Bowie and Jose Bautista. It’s hardly a wasteful exercise: this year’s Canstruction competition raised an astounding 63,000 pounds of food for the Daily Bread Food Bank, amounting to over 75,000 cans of food between the 22 teams. Teams were given seven hours on Monday night, between 6pm and 1am, to get their cans into the Design Exchange, below the TD Tower in Toronto’s financial core, and build their structure in the allotted ten-foot-by-ten-foot space.

Toronto’s Canstruction competition, which has run in the city since 1999, has donated over 900,000 pounds of food to the Daily Bread Food Bank. By all accounts, it’s desperately needed food — according to the Daily Bread Food Bank’s 2015 ‘Who’s Hungry?’ report, demand has increased dramatically since 2008. Over the past seven years, the average amount of time that a Toronto food bank user will continue to use it has doubled to 24 months; in total, food bank usage across the city is up 12% over that same time. Food inequality is rising as well: the largest increase in food bank demand comes from the inner suburbs, where demand is up 45% since 2008. More than 32% of food bank customers are children. The competition gives architects and designers a chance to showcase their skill and creativity in service of the public good. “They’re not buildings, and we can’t live in them,” says Alex Josephson, founder of the Toronto-based architecture and design firm PARTISANS (who are heavily involved in the Union Station renovations), referring to the canstructions, “but they really embody what we’re trying to do.”

“Canstruction is a unique event,” says Canstruction Toronto co-chair Helen Kabriel. “It’s one of the best charitable events around.” She’s right — there’s nothing quite like a statue made almost entirely out of cans, and there’s few charitable competitions in which the point is so clearly stated. Looking at a can sculpture is as much an artistic and engineering experience as it is a psycho-gustatory one. I suspect part of the point is to make you think about food and hunger in large-scale ways; the plain fact of a tin can (or thousands) is accompanied by the thought of what is inside those cans, and how it can be so easily taken for granted. A couple thousand of pounds of flaked ham, mushroom soup, and condensed gravy piled into the shape of Jose Bautista’s bat flip is, at very least, a poignant image of our weird relationship with the food we eat. 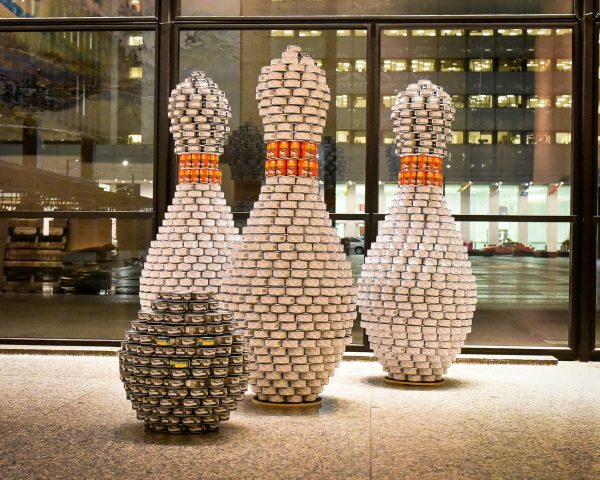 A winning canstruction has a few basic parts. It has cans — a lot of them (the average is around 3,000, says Kabriel). There are levelling materials, thin sheets of material ranging from cardboard to plexi-glass that sit between layers to level them, and create over-hanging sections. And there’s tape — a lot of it too, as it turns out, used to hold everything in place. Some teams will go a step beyond, using cables, Velcro, and string to secure parts of their structure. With these structural tools in place and, often, a team of architects and engineers at the helm, canstructions are actually remarkably stable. Some guides even advise a “gentle push” to make sure everything is in place.

Beyond these basics, and a good design, it all comes down to execution: teams rush the night before to build their canstructions within the allotted time, and those who do it speak rather proudly of “the warm fragrance of take-out pizza” that dominates the room. For the most part, almost all teams are successful, and their canstructions are solid. Still, canstructions are still similar enough to a house of cards to take caution, though, and collapses do happen: this year, the Ryerson University team’s canstruction (made to resemble a pair of Beats headphones) collapsed in the middle of the night. Kabriel says this was a rarity — one of the only collapses she remembers in her 17 years as co-chair. When the top section of the headphones was put in place, the arms of the headphones began to buckle. Kabriel said what we were both thinking: “They obviously didn’t realize how much the cans weighed.”

The sheer number of cans involved in these displays is the product of tireless fundraising by the various teams, who solicit sponsorship and donations to be able to purchase the food. A successful construction takes “months and months of research and planning,” says Marcella Au, whose Quadrangle Architects team took home the prize for Best Meal (a prize for the best combination of the actual food in the cans). She estimated that her team’s construction — called “Meal Metrics,” a physical line graph that displayed the rising cost of various food groups — had over 10,000 cans of food, totally well over 5,000 pounds of food. The sheer quantity of food doesn’t come cheap, which is why fundraising is so important. By raising money and donations, teams are able to buy large volumes of cans — or better, more in-demand cans (Kabriel recalls one year that the winning team built a sculpture almost entirely out of canned baby food, a highly-sought food item at food banks). “Charity is a big part of our firm’s culture,” says Au, who noted that Quadrangle has competed in Toronto’s Canstruction competition for the past 16 years.

For all the fun and whimsy at play, the Canstruction competition is under-girded by serious issues: Richard Matern, senior manager of research at Daily Bread Food Bank notes that in the last month there has been the largest increase in food bank demand in recent memory. “There’s always challenges on the supply side of things,” he says, and events like Canstruction are great, because they help draw in thousands of pounds of food donations — donations, he says, that will go a long way to helping meet demand for food.

Still, there’s something a bit unsettling about hearing this and then looking at the so badly-needed food piled up in the shape of an emoji while well-dressed architects mill about an open bar. Matern’s emotional speech thanking everyone for their contribution highlighted, among other things, that it isn’t in Toronto’s wealthiest areas, like the downtown core, where the event was being held, that food is most needed, but rather in the neighbourhoods further towards the outskirts of the city. Moreover, some have criticized Canstruction events for exaggerating how much good they actually bring to those in need. Despite an increasing number of events like Canstruction, food bank users have complained of expired and poor quality food. When people are hungry, why go through the process of piling food up and leaving it on display for days in a tower in downtown Toronto?

At the awards, however, the mood was more jubilant, and the judges were wholly impressed with the quality of design. “There are more than five awards we wanted to give out at the end of the day,” said Craig White, editor of UrbanToronto.ca. He followed through on this: he awarded an impromptu Honourable Honourable Mention award (complete with a bottle of vodka) to “Joey Bats Hunger.”

After the awards were handed out, the competitors breathed a sigh of relief. Many of them, like Au, were awake late into the evening the night before, fuelled by take-out pizza and caffeine. For Au, who was competing in her third Canstruction Toronto event, this was all worth it — the night spent building is “the most enjoyable part of the whole thing.” It seemed enjoyable in its conclusion, too. More than a few of them gathered around the open bar, beer and wine in hand, giving cheers to a job well done and a cause well served.