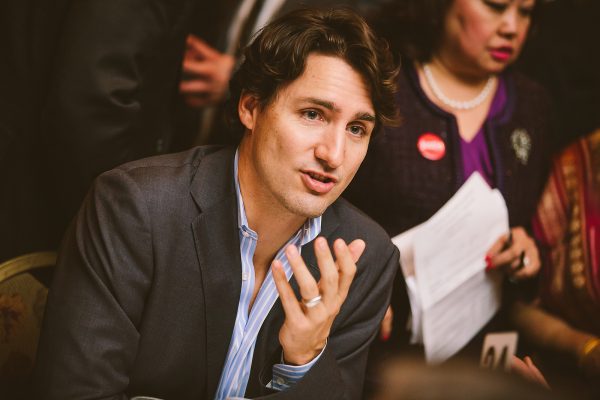 The surrealist performance art show that is the Trump transition process has provided the world with a torrent of distraction that would un-moor even those with unshakeable meditation skills. And I’m assuming the men and women working for Prime Minister Sunny Ways are no more immune than the rest of us.

But as the more and less visible elements of president-elect Donald Trump’s agenda begin to take shape, I’m wondering whether the federal Liberals are connecting the dots and figuring out where Canada’s negotiating strengths may lie. After all, we’re going to need all the torque we can find to withstand the direct and indirect impact of Trump’s (clears throat) policies.

Trump, as it happens, ran on a pledge to make a $1 trillion investment in crumbling infrastructure, and his plan, according to The Hill, also relies heavily on the use of private equity financing to prime the pump.

In other words, Ottawa faces the unhappy prospect of competing for these deals with a Trump administration that has not only a sense of mission, but, presumably, harbors a much more robust ideological belief in public-private partnerships. I think it’s entirely plausible that the deals flowing from whatever the Trump administration puts in place will not only be much larger than anything we can ante up (a frequent complaint from pension and other institutional investors), but also far more lucrative and expedited for the private partners.

What does lucrative look like? These deals typically involve the private partner securing an equity stake or accessing some kind of revenue stream, either directly from end users or on some kind of long-term fee-for-service basis, as Infrastructure Ontario structures its “alternative financing and procurement” deals.

Given the anticipated competition for dollars, the officials overseeing the Liberals’ much-touted infrastructure bank may have to figure out how to significantly sweeten the pot in order to lure in all that off-shore institutional capital. That, of course, means those deals will require even more tax dollars and larger levies or fees, which will of course land in the laps of taxpayers.

This Trump premium will be on top of rising borrowing costs, which, as The Star’s Thomas Walkom predicted last week, will make the infrastructure bank that much more costly relative to straight-up government debt.

(The other little wrinkle with this plan is that one of the Liberals’ dance partners seems to be the global investment manager Blackrock Capital, whose founder, chairman and CEO Larry Fink was not only a critic of Trump during the campaign but a figure widely bruited to become Hillary Clinton’s treasury secretary. If the Trump administration is as vindictive in office as it seems to be at this early stage of the transition process, that kind of alignment likely won’t help matters.)

Bottom line: Given the competition, the federal Liberals may find it difficult to deliver the scale of infrastructure program they had been promising, which could ultimately have an impact on Canadian municipalities and regions anticipating a surge of new funds for cost-shared projects such as transit, housing and so on.

Exhibit B: Corporate Taxes. While Canadian business leaders and conservatives love to moan about our high taxes, the fact is that Canada’s marginal corporate tax rates are low by global standards, and much more advantageous than those in the U.S. According to this recent survey by KPMG, Canada fares extremely well in terms of corporate taxes and cost competitiveness relative to most developed nations. What’s more, according to KPMG, our “cost advantage” relative to the U.S. has been widening in recent years.

Trump has pledged to slash corporate taxes, and I feel quite certain that he and the Republicans in Congress will do precisely that. If his administration also comes through on its threat to re-open NAFTA and perhaps the Canada-U.S. Free Trade Agreement that sits underneath NAFTA, Canadian exporters will not only have to deal with the prospect of new tariff or other barriers, but also markets where their rivals will be paying lower taxes. While our dollar has dropped from the Harper years, the math now changes for Canadian firms, including, crucially, the manufacturers clustered around the urban centres between Windsor and Montreal. For many Canadian companies, the U.S. accounts for over 80% of their exports.

It’s by no means clear is how the federal and provincial governments will respond, although a race to the bottom on corporate taxes doesn’t seem like a smart course of action. Whatever happens, the impact will be felt in our big cities, and in those segments of the labour market that rely on selling goods and services abroad.

Exhibit C: Energy. Canada and the U.S. still have the world’s largest two-way nation-to-nation trading partnership (only the European Union, in the aggregate, has a larger one), and it’s difficult to imagine that looming changes in U.S. energy policy won’t have an impact on both our economy and the federal government’s post-Paris plan to put a price on carbon.

And what will those changes be? For one, I think it’s safe to assume the Environmental Protection Agency’s 2015 “Green Power Plan,” an Obama administration initiative to slash carbon emissions, will be quickly dispensed with, meaning that coal will once again be a safe, dirty and cheap source of base load energy. It was what Trump promised Appalachia.

That move will almost certainly drive down energy prices for U.S. manufacturers. This shift will work its way into the cost structure of U.S. goods coming to Canada, and may have a competitive impact on the price of Canadian goods heading to the U.S.

The looming U.S. coal renaissance will likely affect one very specific sector of Canada’s energy market: hydro. Several provincial utilities – Nova Scotia, Newfoundland/Labrador, Quebec and Manitoba — have invested substantial sums in recent years to expand their hydro-electric production capacity at least partially in anticipation of more exports to U.S. states that are looking to green their fleets or need to find clean alternatives to coal generation in response to the EPA directive. With the EPA’s regulatory stick off the table, U.S. utilities will obviously avail themselves of the cheaper (and more patriotic) option, instead of the comparatively costly Canadian alternative.

Then there’s Keystone XL. Trump said throughout the campaign that he will approve it, and I have every confidence that he will follow through. So what do we do? For all the government’s rhetoric about climate change and First Nations, the Liberals have been inching forward with approvals for controversial pipelines — including a very large liquid natural gas project linking Alberta to a Pacific terminal — that got a green light earlier in the fall, as The Star’s Chantal Hebert reported.

Trudeau last year claimed to be “disappointed” by the Obama administration’s decision to ice Keystone, but I remember reading his reaction as more one of relief than regret.

While the Liberals insisted last week that Keystone is no longer important to them because the country’s goal is to focus on Pacific Rim markets, it will be interesting to see how that talking point evolves when Keystone becomes one more piece of a gigantic renegotiation of continental trade arrangements after January 20.

The upshot is that if the Trump administration’s goal is to re-boot America’s trading relationships at whatever cost to the counterparties, Canada’s public finances will almost certainly end up taking a significant hit. Indeed, with our economy in a somewhat sluggish state and so many Canadians still gorging themselves on a diet of cheap debt, the prospects generally look pretty bleak.

So my question for Trudeau’s Liberals, then, is this: What are your points of leverage? Because right now, I can see nothing that even faintly resembles a Cannuck-shaped speed bump in the path of Trump’s economic juggernaut.